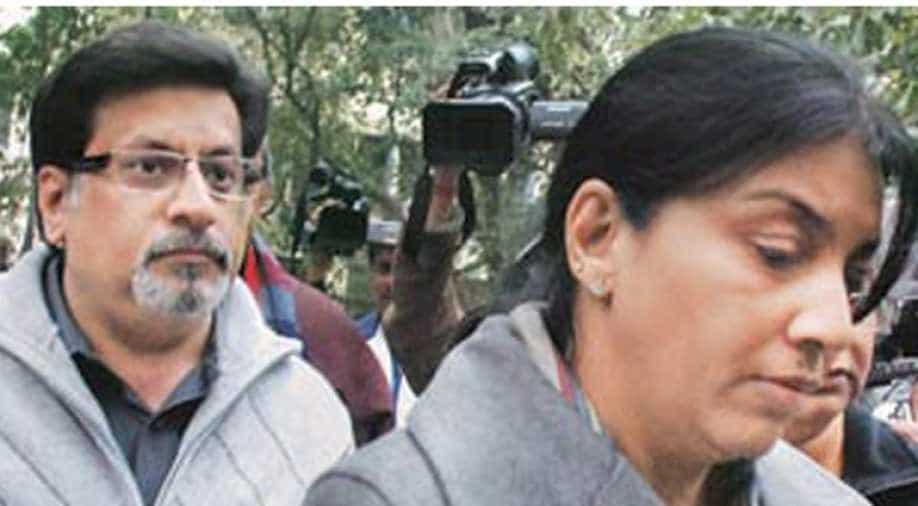 Aarushi's parents Rajesh and Nupur Talwar were convicted for the murders of Aarushi and Hemraj by a CBI court in 2013. Photograph:( ANI )

The Allahabad High Court is expected to announce its verdict today on whether dentist couple Nupur and Rajesh Talwar murdered their teenage daughter Aarushi and their domestic help Hemraj in 2008.

The court will decide on an appeal filed by the Talwars challenging a CBI court order convicting them for the murder of Aarushi and Hemraj.

The couple have been in Ghaziabad's Dasna jail since 2013 after a special CBI court in Ghaziabad convicted them and sentenced them to life imprisonment. The judge who found them guilty accused them of destroying evidence.

A division bench of the high court comprising justices B K Narayana and A K Mishra had reserved its judgement on September 7 and fixed October 12 as the date for the verdict.

Fourteen-year-old Aarushi was found dead inside her room in the Talwars' Noida residence with her throat slit with surgical precision on the night of May 15-16.

Hemraj, 45, was initially suspected of the murder after he was found missing, however, body was recovered from the terrace of the house two days later.

The police then suspected the Talwars and said Rajesh Talwar had murdered Aarushi and Hemraj after finding them in an "objectionable" position.

Rajesh Talwar was arrested seven days after the murder by the Uttar Pradesh Police on May 23, 2008 after which he was lodged at Dasna Jail and let off on bail on July 11.

In 2012, his wife Nupur surrendered before a Ghaziabad court before trial and was also sent to the same prison.

The accusations enraged the Talwars and friends, who accused the police of framing the dentist couple in order to cover up a botched investigation.

After the Uttar Pradesh police drew criticism for its shoddy investigation, then chief minister Mayawati handed over the probe to the Central Bureau of Investigation (CBI).

The CBI initially exonerated the parents and suspected the Talwars' assistant Krishna, and two domestic servants, Rajkumar Sharma and Vijay Mandal, of the murder.

It named Rajesh as the sole suspect based on circumstantial evidence but refused to charge him because of lack of evidence.

The court refused to allow the CBI to close the case.