Yearender 2018: Marriage, divorce and pregnancies in a year of celeb weddings and splits 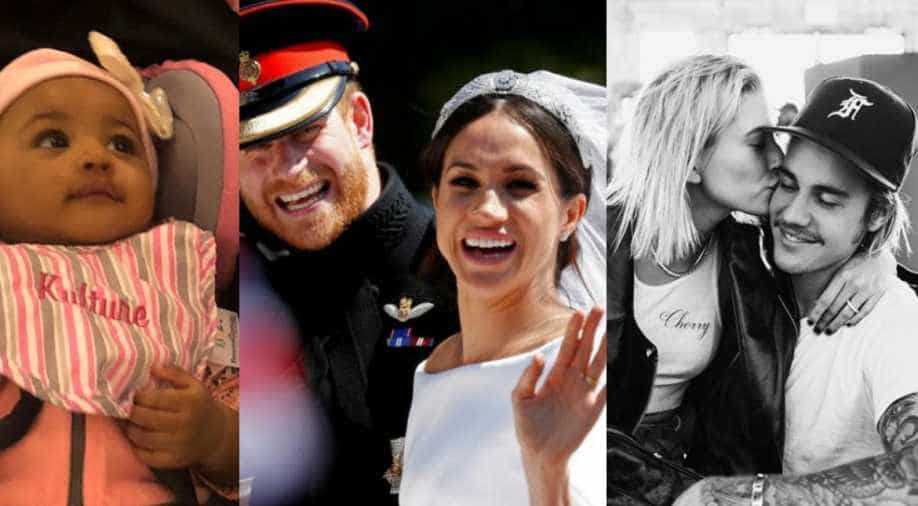 From Meghan Markle's wedding to Cardi B giving birth, lots happened in the world of entertainment.

Scores of celebrities got married, announced their engagements or had children in 2018, but there was also a share of heartbreak and splits.

By far the biggest wedding of the year involved a coming-together of the worlds of showbiz and royalty as Britain's Prince Harry and former US actress Meghan Markle got married.

The pair wed in May in a dazzling ceremony that blended ancient English ritual with African American culture, infusing the 1,000-year-old British monarchy with a blast of modernity.

One person who didn't want to comment on their much-anticipated nuptials was actress Emma Thompson. In a clip that soon went viral, she told a Reuters journalist who asked her about the wedding to 'just stop it' and said she was 'not going to talk about the royal wedding'.

In October came the much-anticipated announcement that Meghan was pregnant with the couple's first child due in the spring of 2019.

There were more royal nuptials in October too, when Princess Eugenie tied the knot with Jack Brooksbank and took a horse-drawn carriage tour round Windsor after the service.

Eugenie, 28, daughter of the queen's third child, Prince Andrew and his ex-wife Sarah Ferguson, the Duchess of York, tied the knot with Brooksbank, 32, in a traditional ceremony at Windsor Castle's 15th Century St George's Chapel.

It was the same setting as the lavish wedding in May of Prince Harry and Meghan.

In other royal news, Britain's Prince William and his wife Kate welcomed a son Louis Arthur Charles in April.

The prince, who is fifth in line to the British throne, weighted 8 lbs 7oz at birth.

The Duke and Duchess of Cambridge are pleased to share a new photograph of their family.

The photograph, taken by Matt Porteous, shows The Duke and Duchess with their three children at Anmer Hall, and features on Their Royal Highnesses’ Christmas card this year. pic.twitter.com/6XqCMlhLi8

British actress Keira Knightley, who has a young daughter, made headlines in October after she penned an essay for the book 'Feminists Don't Wear Pink (And Other Lies)' talking about childbirth. Some outlets accused her of criticising Prince William's wife Kate's polished looks coming out of hospital soon after labour.

"The comments that I made are purely about...are completely about the culture that silences women's truths and forces us all to hide. And I absolutely did not shame anybody in any way. In fact quite the opposite," Knightley told Reuters on the red carpet for her new film "Colette".

It was not such happy news for two members of Hollywood royalty, Angelina Jolie and Brad Pitt -- the pair have sought to move forward with their long and sometimes bitter divorce this year.

Pitt and Jolie were married for two years and enjoyed a 10-year romance that had made the pair one of Hollywood's most glamorous couples. They have six children for whom she is seeking primary custody.

Actress Michelle Williams quietly married in July, telling Vanity Fair magazine she never gave up on love after the death of her partner Heath Ledger 10 years ago.

Williams, 38, the fiercely private Oscar-nominated star of 'Brokeback Mountain,' told the magazine that she married American indie musician Phil Elverum at a private ceremony in the rural Adirondacks region of upstate New York.

The couple dated in 2016 but had broken up. In June, they appeared together publicly, leading to speculation from fans that they had rekindled their romance.

'Saturday Night Live' star Pete Davidson confirmed in June that he and pop star Ariana Grande were engaged after dating for less than two months.

But by October People Magazine and other U.S. media outlets reported the couple had called off their engagement. In early November Grande released a new surprise single titled 'Thank U, Next' in which she sings about her past relationships.

British actor Hugh Grant, 58, married Swedish television producer Anna Eberstein, 39, with whom he has three children, at a low-key civil ceremony in London in May.

Speaking about the union, after decades of deriding the idea of marriage, he said he tied the knot for a good reason.

Celebrity couple Zayn Malik and supermodel Gigi Hadid announced they had split up in March after two years of dating, with both posting statements of mutual love and respect.

Malik, a former member of British boy band One Direction, and Hadid, a model for Victoria's Secret, Fendi and Tommy Hilfiger, gave no reason for the split. They have reportedly since rekindled their romance, sharing happy snaps on social media.

In February, former 'Friends' star Jennifer Aniston and her husband Justin Theroux said that they were separating after less than three years of marriage.

Another separation was announced in November with the media reporting that Oscar-winning actor Robert De Niro and his wife of more than 20 years had separated.

In celebrity baby news, Kim Kardashian's new daughter with rapper husband Kanye West, named Chicago, was born in January to a surrogate -- the third child for the celebrity couple.

Meanwhile, rapper Cardi B gave birth to her first child, a baby girl, in July.

The parents (the father is rapper husband Offset) named the child Kulture Kiari Cephus, Cardi B said in an Instagram post that featured a nude pregnancy photo of the 25-year-old 'Be Careful' singer surrounded by flowers. They broke up by the end of the year.

And there was more happy news for actress Gwyneth Paltrow - who married producer Brad Falchuck.

Took me a minute to get it together, but at long last, for those who have requested, a little look inside the best day of our lives. Link in bio for more. #thefaltrows

Nick Jonas and Priyanka Chopra also announced their engagement in August and tied the knot in December this year at Umaid Bhawan Palace in Jodhpur, India.