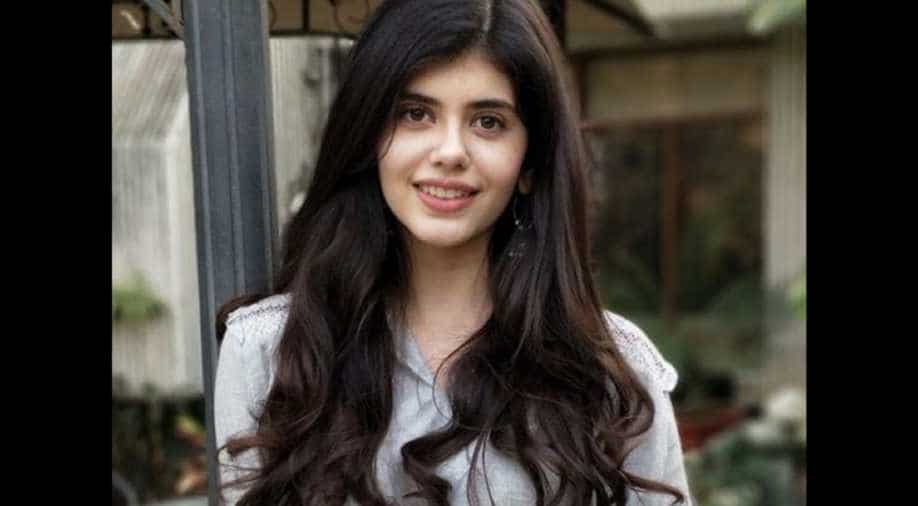 On Thursday Sanjana Sanghi issued a clarification and stated that her post had been misconstrued and that she was not saying goodbye to Mumbai permanently.

Just weeks before her debut film 'Dil Bechara' was to premiere on Disney + Hotstar, newcomer Sanjana Sanghi on Wednesday hinted at leaving Mumbai and shifting her base to Delhi permanently.

On Tuesday Sanjana was called in for interrogation by the Mumbai police. A day later, Sanjana shared a photo of herself in what seemed like the airport and bid goodbye to Mumbai city where she was based while shooting for Mukesh Chhabra's film 'Dil Bechara'. A remake fo Hollywood film 'The Fault In Our Stars' the film is Sushant Singh Rajput's last film.

Sanjana wrote a cryptic note along with her selfie, hinting that she may never return to Mumbai. "Khuda hafiz, Mumbai. Chaar mahine baad apke darshan hue. Main chali Delhi vaapis. Aapki sadke kuch alag si lagi, sunsaan thi, shayaad mere dil mein jo dukh hai, mere nazariye ko badal rahe hain, ya shayaad filhaal aap bhi thode dukh mein hain (Bye, Mumbai. It took me four months to see you. I'm going back to Delhi. Your streets seemed a little different, they were empty. Perhaps the sadness in my heart is changing my viewpoint, or perhaps you are also in pain)," read her post.
She ended the note with, "Milte hain? Jaldi. Ya shayad, nahi (See you... soon... or may be not)."

On Thursday, though, Sanjana issued a clarification and stated that her post had been misconstrued and that she was not saying goodbye to Mumbai permanently. "Did not mean any kind of "bidding adieu" forever- not to Mumbai, not to anything else," Sanjana wrote.

"I've been back home in Delhi since February throughout lockdown!" added Sanjana and said that her bidding goodbye to Mumbai was only till the COVID situation improved in the city. 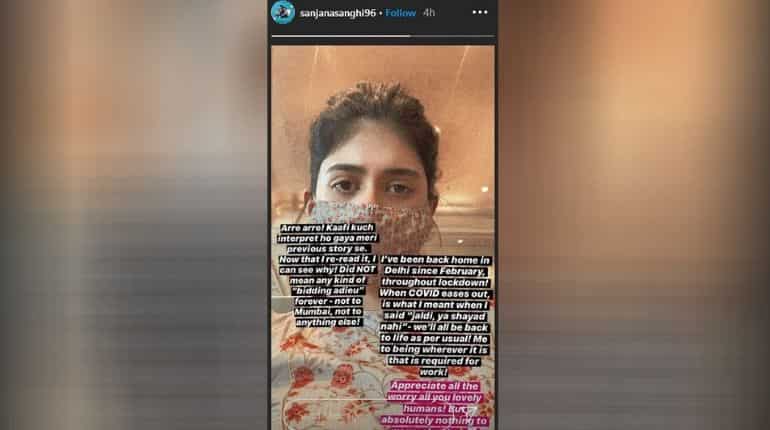 Sanjana was first seen in Ranbir Kapoor starrer 'Rockstar'. She has also featured in numerous advertisements over the years.

Sanjana was questioned by the police in relation to #MeToo allegations which had alleged that Rajput had harassed the young actress on the sets of 'Dil Bechara'. Sanjana had gone on record to deny the incident and clear Rajput's name from the controversy back in 2018. On Wednesday too she reportedly denied making complaints about the late actor's behaviour.

. . You gave me a forever, within a limited number of days, and for that. I’m forever grateful. - our beloved novel, The Fault In Our Stars A forever of learnings, and of memories. I refreshed my web pages a 100 times hoping I’m reading some sort of horrible joke. I’m not equipped to process any of this. I don’t think I ever will be. I’m definitely not equipped to articulate my feelings, this is me failing, but trying. Sushant and I were to save all our anecdotes, moments and stories from the time we spent shooting together up until the release of our film, so we had kept them in our stomachs all this while. After 2 years of seemingly all the possible difficulties one single film can face, with all sorts of crap constantly being written, and being relentlessly pursued - we were supposed to FINALLY watch the film, our labour of love, together - my first, and what you told me you believed was your best film yet. Amidst your journey, and in the middle of 16 hour long shoot days, you somehow found a way and had a desire to yell out to me from the opposite side of set screaming “Rockstar, itni achi acting thodi na karte hain paagal!” ; To guide me over things big & small through our film’s process, To tell me to conserve my energy on set; To discuss even the smallest nuance you thought could change the narrative of a scene and would whole heartedly accept my disagreement; To discuss ways in which we could together forge a brighter educational future for the children of India. You were a force Manny, and you always will be. We’re going to spend an eternity to try and make sense of what you’ve left us behind with, and I personally never will be able to. I simply wish you never left us behind in the first place. Just know, you have a country full of millions, looking up at you, smiling at you, thankful for you. As you smile back at us, from up above. The fact that you get to spend the rest of your time by your mother’s side, I know you gives the only happiness you wanted in the world. #RIPSushantSinghRajput

Post Rajput's untimely death, Sanjana has shared heartwrenching tributes for her co-star on her Instagram page.
Fans had demanded a theatrical release of 'Dil Bechara' but the makers decided to give the film a digital release instead. The film will be available to non-subscribers of the OTT platform as well.