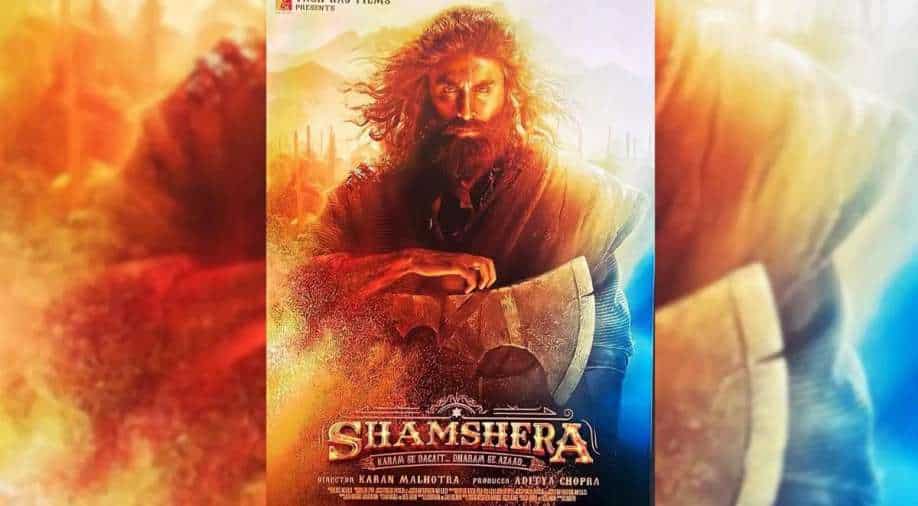 Helmed by  Karan Malhotra, `Shamshera` has been produced by Aditya Chopra and is set to release in three different languages Hindi, Tamil and Telugu.

The official poster of Ranbir Kapoor's first look from his upcoming movie 'Shamshera' is here.

A day after Ranbir's first look got leaked online, now makers are making everything official. Starting the new week with the big announcement, Yash Raj Studious released a new poster featuring Ranbir in a rugged rough look. The movie is scheduled to release on July 22, 2022.

The film also marks Ranbir's comeback to the silver screen after his 2018 biopic film 'Sanju'. Director Karan Malhotra shared the look and wrote, ''A legend will rise on 22nd July. Experience it in @IMAX in Hindi, Tamil & Telugu. Celebrate #Shamshera with #YRF50 only at a theatre near you on 22nd July. #RanbirKapoor | @vaaniofficial| @sanjaydutt| @yrf| #Shamshera22ndJuly.''

In the poster, Ranbir is looking fierce with long hair with a bruised forehead and is carrying a sharp axe.

While the plot details of the movie have been under wraps, as per the reports the film is set in the pre-Independence India, and follows the story of a warrior tribe, who are tortured, and imprisoned, and from them, a warrior raises his voice against the slavery and became a leader of his tribe.

Also Read: 'Brahmastra Part One: Shiva' teaser gives a glimpse of key characters, trailer to release on this date

Helmed by Malhotra, `Shamshera` has been produced by Aditya Chopra and is set to release in three different languages Hindi, Tamil and Telugu.

Meanwhile, Ranbir has been in the news lately for his upcoming and most awaited sci-fi film 'Brahmastra' co-starring Alia Bhatt. The film trailer landed in controversy recently, find out why.