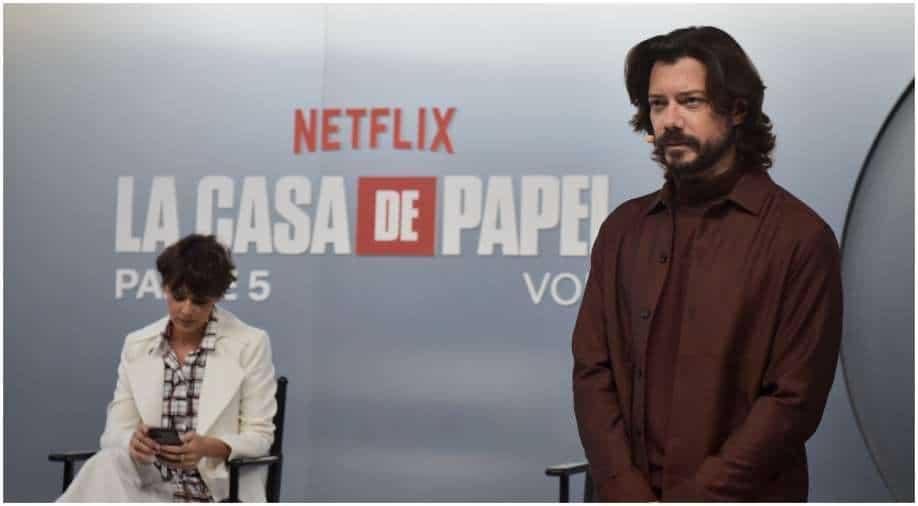 Álvaro Morte aka The Professor at the global press conference of 'Money Heist' S5 Photograph:( Others )

During the virtual press conference, the cast of 'Money Heist' spoke about the global reach of the show and The Professor aka Álvaro Morte revealed how a letter from his script writers made him break down in tears.

There are very few shows in the current times that enjoy the kind of global success 'Money Heist' does. Now, as the show nears its grand finale, the cast got together one last time to talk to the international media--which WION was a part of--and spoke about a wide range of topics: from the raging success of the show to their last day on set.

On the topic of how the last day of the shoot went, an emotional Álvaro Morte aka The Professor revealed to us that he couldn't keep it together. "... After five years, I went on set and none of my colleagues were there. And I think that was a little bit disturbing (to me). Because, somehow, I have had this parallel show since my character died. I mean, it was a person that didn't know my character was dead.

So imagine how crazy everything is. So, there are people who will start watching it now. But I have to say something. Let me see if I can find the words I had when I got up in the morning, which was that I was calling the house and thinking 'we have to close this, everything has an ending, and I am well balanced to do what I have to do'. And there was a very particular thing I did that, well, I say, I'm growing. I can feel I have matured. But when we finished shooting, I received this letter from the script writers, where, obviously, there was a message emphasizing on what was happening after everything that had already happened (in the show, without giving away spoilers)," said Álvaro Morte about him revisiting the set and feeling different when asked about the last day of the shoot.

"Somehow I wasn't able to read it. Six, seven minutes went by, because I couldn't stop myself from crying and then crying some more. And I had the feeling that if I read it, I would make a fool of myself by whining, crying and everything. And I realized, once again, the impact, you know--not just from a professional but also personal standpoint--the show had on my life. I have to tell you this, too, because I mean, we have to open our hearts here. This is a farewell and we probably won't see each other in the years to come. And it's something I realized this morning. I mean, (it's) all together very difficult, to be honest. So I haven't seen you all together for a long time already. I was trying to think about something to guide me because I cannot find the right words to express this," he concluded, still visibly emotional thinking about the last moments on the set of one of the greatest shows to have been created in recent times, 'Money Heist'.

When Alex Pina (creator) was asked about the development of the script and how the show started on an emotional note before graduating to something more complex, this is what he had to say, "Wow... was (it) way more emotional? No. I mean, the first volume was emotional. But the second volume is where we linked everyone together. Also, we went backwards and put all the pieces of the puzzle together. And so we've added some emotional parts to the characters, somehow closing the circle of who those characters are and giving the answers to help understand the whole universe of 'Money Heist'. I think from a narrative perspective, when we started to write this volume, we saw that we have way more things (to cover) and the (amount of) time we had to elaborate on them. And there were some twists and turns that we had to kind of compress from a sentimental standpoint. So this is a very balanced installment and a harder one to write. Well, when we're finished writing the last season, we were exhausted as we did it in record time. And when I was finished with writing, I had my direction. My production director kept saying 'please send me what's already happened'. We hadn't finished and when we did finish I wasn't able to re-read the script. We were so exhausted during the process and in elaborating on all the plot points. But I think it's the most exciting one."

Alex Pina also acknowledged the fact that his show has become a global phenomena and revealed that he is mighty impressed to learn that Indians are 'going crazy' over 'Money Heist'. "... The mix of human quality and adrenaline (rush) creates this emotional bond (among viewers) and its massive. It is massively entertaining and the fact that they're watching us in the Philippines and India... They're going crazy in India and their fiction is so different from ours, they're still super hooked to it. It's amazing! (sic)" concluded the creator.

Also read: WION exclusive! CarryMinati: My alter ego made me from being invisible to widely recognised

'Money Heist' season 5 finale will be streaming on Netflix from December 3.