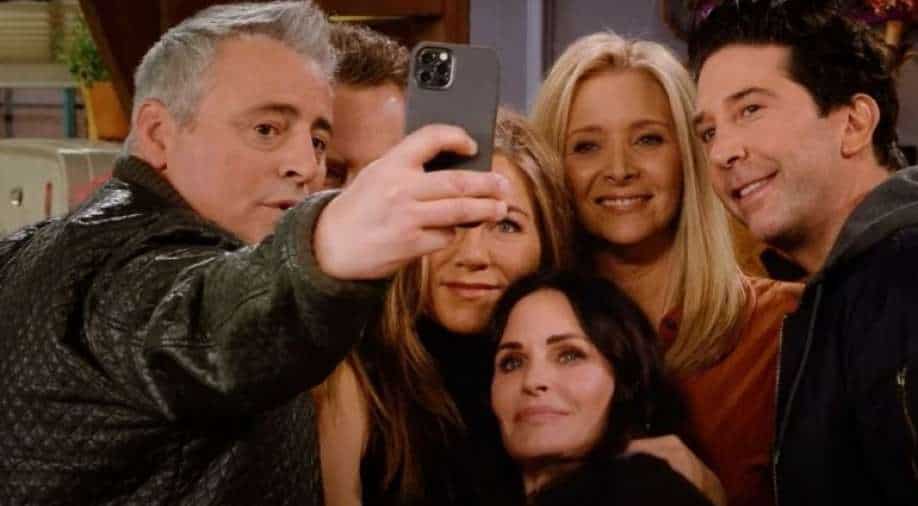 If there's one word that perfectly defines the highly anticipated 'Friends' reunion episode. it would be nostalgia.

Fans of the iconic show had for years yearned for the six cast members to reboot the show and reunite on screen as the iconic characters they played. Well, the reunion happened after a year's delay due to the pandemic in a slightly staged yet unscripted sit-down chat show format. We aren't complaining, really.

As Jennifer Aniston, who played the iconic character of Rachel on the show, says right in the beginning of the episode, 'Where's the tissue box?' - the episode is filled with nostalgia, with cast members revisiting some very popular episodes, reenacting them during a table read, talking of their fears and even crying happy tears at just being on the sets again.

The cast sits down for a free-wheeling chat with host James Corden on the famous orange couch in front of the iconic fountain where the beginning credits of the show was shot 27 years ago. The makers- David Krane, Marta Kauffman and Kevin Bright - too share their thoughts on the show in a separate section and how it fell into place when they all were in the 20s and friends were family.

While it was stated that the cast would gather for a chat in an unscripted show, the episode had plenty of moments that looked very staged and planned.

From the lightning round, where the cast answered a few questions about their characters and ushered in some old cast members like Tom Sellek who played Richard, Mr Heckles and even Joey's hand twin. They also had actors Maggie Wheeler (Janice), Elliot Gould and Christina Pickles (Mr and Mrs Geller) making brief appearances.

Wish the cameos delved slightly deeper into the actors and how they were cast on the show or they could speak more about their experiences. The episode also saw stars like Kit Harington, David Beckham, Mindy Kaling, Justin Bieber, Malala Yousafzai talking about their favourite moments from the series.

Perhaps the best, although not unexpected, the moment was Kudrow jamming with Lady Gaga on Smelly Cat and giving the legendary song a contemporary twist. No one more apt than Gaga to sing the most weirdly worded song.

The theme of the show that had a run time of 104 minutes was more happy memories and the makers purposely avoided dwelling too much into the serious bits. At one moment Perry, who perhaps looked the most aged of them all with a slur and a hunchback, admitted how he would break into a sweat every time a joke of his fell flat and how it worried him every day of the shoot.

But they moved on from that aspect a bit too quickly - not wanting to discuss Perry's addiction problem that was also a constant while they were filming show back in the day. It was a rose-tinted perspective that rode on nostalgia, bringing back memories of the show that impacted generations across the world.

One of the most endearing moments also included a fan segment where people from all over the world spoke about the impact the show had on them and how it influenced their lives and uplifted them on the darkest of the days. A point that every fan of the show would agree with.

It also never really addresses how their lives changed post 'Friends' or what the impact on their lives was once the show ended.

The episode is also heartbreaking on many levels- it shows how some of our favourite actors have aged, makes you realise that the ones whom you idilolised while growing up for their humour are now quite dull and boring and barely saying anything funny.

Over the years, the show has been accused of not aging well- and as Kudrow rightly points out that it would be weird for Phoebe to behave the way she did at this day and age.

All this makes one realise that veiwers have come a long way and what may have worked 17 years back would not work so much now.

Lady Gaga to BTS: 'Friends' reunion was a starry affair

Filled with anecdotes from their days on the set, with the cast speaking up about off-screen camaraderie, crushes and forgotten lines, the episode, aptly title 'The One Where They Get Back Together' brings back memories of a bygone era. It leaves fans emotional, smiling through tears and realising that with the cast- they too have grown up and moved on. I would say the episode serves as a refreshing change amid the gloom of pandemic, brings back the famous six together on screen for one last time and slyly slips in the fact that if they had to reboot the show- it would not be the same anymore- as Kudrow mildly puts it herself and finally putting to rest speculations about a possible movie based on the characters.

Best to enjoy the sweet moments and laugh with your favourite six. 'Friends' reunion episode is available in India on Zee5.