For a Leading Light of Indian Fashion, All That Glitters Is Not Gold 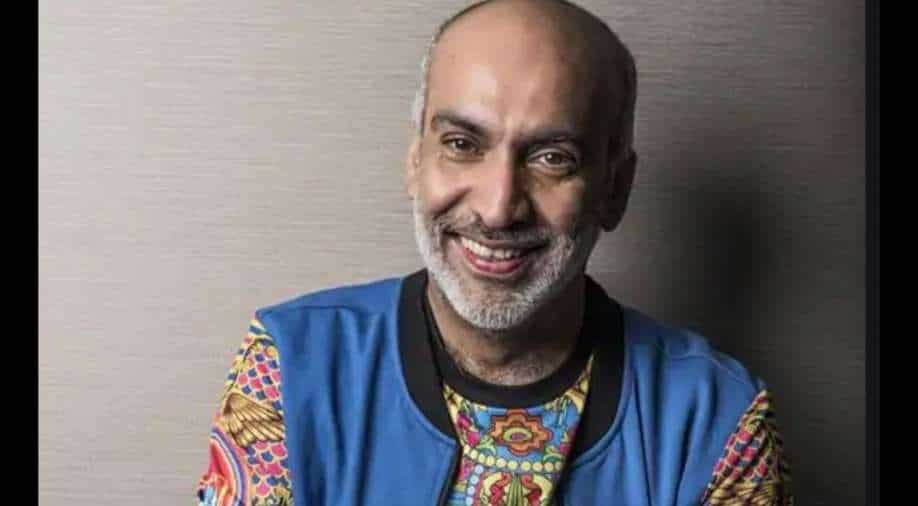 Manish Arora founded his label in 2001 with his friend Bhagwani, who steered the finances. In 2005, Arora made his international debut in London.

In September, Manish Arora, a fashion designer once described as the “John Galliano of India,” announced that he was creating a pop-up restaurant in Paris, his adopted hometown, for the Holi festival. An Instagram slideshow, featuring the brightly colored maximalism that is the Indian designer’s signature, depicted Arora with assorted friends sampling traditional Indian snacks.

Days later, he introduced a high-profile fashion collaboration with Amazon India, alongside three more of India’s most celebrated designers: JJ Valaya, Ashish Soni and Suneet Varma. Arora is also currently a member of the advisory council for the International Woolmark Prize, one of the most prestigious fashion awards in the world.

At first blush, such ventures would seem like savvy lifestyle brand extensions for Arora, a former creative director of French fashion house Paco Rabanne and the first Indian designer to make it big in Paris. His aesthetic defined Indian-fusion style for Westerners in the late aughts, with a riotous palette and Indian craft methods like embroidery and appliqué.

But Arora’s brand partnerships it turns out, seem to be more like belated attempts to save a business beset by years of chaos and financial troubles than an indication of success.

And his messy downfall has also been particularly disappointing for those who had hoped he would help bring international attention to the quieter but vital layers of the Indian fashion industry — like the anonymous artisans (called karigars) who are responsible for much of the meticulous and beautiful handwork that goes into the garments.

“Fifteen years ago, Manish was almost seen like a god here for being the first Indian fashion designer to break into the global luxury market,” said Sunil Sethi, president of the Fashion Design Council of India. European high fashion, after all, is famously white and set in its ways, and until recently known more for appropriating ideas from other cultures rather than embracing and celebrating ethnically diverse designers and artisans.

“Big international brand names wanted to collaborate with him,” Sethi said. “We were just so proud. And as the international fashion industry looked at Indian talent in a new light, we wondered whether more Indian designers would follow in his footsteps to the catwalks of Europe.”

Instead, today, Arora’s brand has been felled by business deals gone bad, unpaid wages lawsuits and vendor disputes that started at least three years ago, long before the coronavirus dealt the final blow. Earlier this year, Arora, who is in his late 40s, parted ways with his business partner of several decades, Deepak Bhagwani. Currently, the Manish Arora website is shut for maintenance.

The brand’s last runway show, for spring 2020, was shown a year ago, and pieces that are available to buy are largely discounted, from past seasons and on sale via small, independent boutiques in the Middle East and Asia. The Manish Arora store in Paris has closed, and in messages seen by The New York Times, employees who asked the company about unpaid wages in October were told none would be forthcoming because the company was now in liquidation. According to Bhagwani, 43, the French holding company for Arora’s Indian subsidiary went into liquidation in July.

Arora, reached by email in mid-October, declined to discuss the particulars of the situation. He said there was “acute disappointment” among all parties” and that he did not want to comment “on what went wrong given we are in liquidation and also the matter is in court.”

“We expanded and hoped to reach the world with our unique sensibility and we tried. Sincerely,” Arora wrote. “Unfortunately things went wrong. The markets shrunk. Expenses mounted and we soldiered on to the best of our capabilities.”

For the moment, he added, he was “reassessing the way forward.” That does not help, however, those he has left behind.

The Fashion Hope of India

Arora started out with big, global ambitions. But the same forces that have strangled other independent designer businesses — chronic discounting from retailers, outrageously expensive fashion shows, overproduction of items nobody wanted — also affected him. And instead of prioritizing responsibilities to longtime employees, it seemed Manish Arora management opted to chase profits and keep up appearances.

Then the pandemic began to ravage India’s fashion industry. As Western retailers canceled orders and the Indian government abruptly locked down the country March 24, Arora and his partners had started closing their business.

It also came at a time when consumer attitudes toward fashion businesses that fail to pay workers are changing — and employees are increasingly willing to speak up, said Sanchita Banerjee Saxena, executive director for the Institute for South Asia Studies at the University of California at Berkeley.

Arora founded his label in 2001 with his friend Bhagwani, who steered the finances. In 2005, Arora made his international debut in London. He became creative director of Paco Rabanne in 2011 and moved into a high-end apartment in Paris a year later. He produced two seasons for the brand before leaving to focus on his own label, which soon diversified into eyewear, home wear and cosmetics.

Beyond his flamboyant, critically acclaimed runway shows, Arora also received growing media attention thanks to high-profile collaborations with companies like Nespresso, Swarovski, Swatch and Reebok, a first for a homegrown Indian brand. From the start, he appeared to understand that his power lay in refashioning distinctively Indian aesthetics for white audiences.

Behind the Gilded Curtain

While Arora’s business appeared to flourish abroad, however, it struggled to grow at home, according to former office staff and artisans. In 2012, Indian fashion company Biba took a 51% stake in order to help Arora expand Indian by Manish Arora, which, among other lines, included a neon-colored couture bridal collection for the domestic market.

But former employees, who spoke on the condition of anonymity because they feared it would make it difficult to find future jobs, said that the move toward wedding collections, with a different type of clientele and lower prices, failed to excite Arora. Biba did not respond to an email requesting comment for this article.

By mid-2017, Indian by Manish Arora had shut down. According to Aftab Alam, 45, a master leather worker and former employee, and Omveer Singh, 40, who worked in accounting and marketing, it was also the year that everything started falling apart.

Partnerships with important stores started to dry up. According to Alam and Singh, employees’ began to be paid late, first by a few days, then a few weeks.

By the end of 2017, pay was delayed by two to three months, Alam and Singh said. Alam, who later went on to sue his employer for unpaid wages, described 18-hour days without overtime pay, adding that vendors, couriers and partners also stopped receiving timely payments. If they were paid at all.

According to Alam’s suit, he “sent numerous reminders to the operational debtor and visited them personally at their office for settlement of outstanding dues.”

His requests, say the lawsuit, “fell on deaf ears and nothing has been done to arrange for his legitimate dues, despite the operational debtor clearly admitting his liabilities towards outstanding dues.”

In a response dated June 2019 and seen by The New York Times, the company said it didn’t have the cash to pay Alam: “We are agreed to pay March and April 2019 salary, leave encashment and also his gratuity. But due to insufficient funds, we cannot currently pay this amount. We are trying to resolve it ASAP.”

Unpaid interns began doing the work formerly handled by seasoned employees, like managing important photo shoots and production orders, as management struggled to balance the books and repay debts, according to a former intern, who declined to go on the record because they work in the Indian fashion industry.

“They owe a lot of money to us,” said Jaf Jafri, owner of Brave Models, an Indian modeling agency that worked with Manish Arora for almost six years and took over the production of photo shoots after the brand closed its own studio. “I wrote them almost a hundred emails. No replies.”

Former employees in India were told Oct. 10 that the company was in liquidation. In an email, Bhagwani said he knew that there were vendors who were still owed money.

In early 2018, the company stopped paying into the Provident Fund accounts, a compulsory retirement savings plan similar to Social Security, of at least a dozen employees. By the time, Intrend, a Chinese fashion holding company, and Gulshan Jhurani, an accountant whose bio on his website says he has experience in turning around troubled companies, had taken stakes in the Manish Arora business.

Intrend and Jhurani did not respond to emails requesting comment for this article.

In a video filmed and sent to The New York Times in August, 10 recently laid-off production workers said they were owed several months’ wages, and have not had funds deposited in their Provident Accounts for two years, despite sending a signed notice to the Indian government asking for an investigation, also viewed by The Times.

All salary questions started being referred to Jhurani. “If you called Deepak, he would say to talk to Shivam in accounts,” Alam told The Times. “Shivam would then say Gulshan will help. I would then again talk to Deepak and say that they are not doing anything. Then he will say talk to them again. I said, ‘If you will do this, how will my wife and children survive?’”

The company’s headquarters used to be in the industrial neighborhood of Noida, outside of Delhi, before it moved its offices and sampling studio to Dhan Mill, the poshest part of Delhi. In February 2018 the company hosted a lavish opening party.

Just days later, 15 employees including Alam stated their intention to quit unless they received what they were owed. When Alam left, in April 2019, he wasn’t paid his back wages until December, after serving Manish Arora and Bhagwani with a lawsuit. Alam estimated he is still owed 263,000 rupees ($3,570) for his legally required reward for long service and vacation days not taken, and that up to 20 former workers were also owed wages.

“I was the creative head and there were business heads who managed the rest, including money and administration,” Arora wrote in the email he sent to The Times about Alam’s situation and other claims by former employees. Arora declined to address specific issues but said he was “happy” to discuss “matters which I am aware of as a creative director.” He did not respond to follow-up attempts to contact him.

Bhagwani said that the company had outsourced production in 2018 after receiving new investment and paid off almost 200 workers’ wages including Provident fund payments. Although he is no longer with the company, he confirmed there are workers who stayed after the consolidation with outstanding payments.

In his email to The Times, Arora said he was “taking time off to examine what I now want out of life and a career.”

To his former employees, Arora became a dreamer who appeared to exist in a world as fantastical as the vividly dreams he put on the runway.

“When I was working with them all — and with Manish — he was a big international name,” former employee Singh said. “Now what happened, what they did, we do not know.”