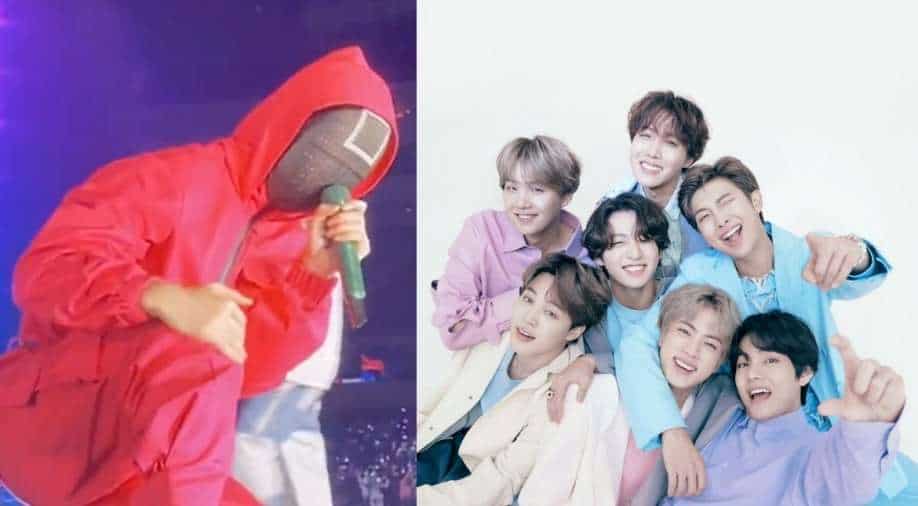 What definitely stood out was that BTS member V sported the Squid Game outfit -- pink jumpsuit along with a black face mask worn by guards in the Netflix show.

It was a night to remember for BTS fans as the K pop group performed in Los Angeles, their third concert ‘Permission to Dance’. Interestingly, all members including RM, Jin, Suga, J-Hope, Jimin, V and Jungkook did something quirky to make it a memorable night for their fans.

What definitely stood out was that BTS member V sported the Squid Game outfit -- pink jumpsuit along with a black face mask worn by guards in the Netflix show. He performed through the night in that outfit.

Another member, Jin, was also seen trying on the black mask. In their last concert, Jin had channelled Squid Game’s Younghee doll. He was seen in two pigtails and while others played games like Red Light, Green Light - he acted as the doll.

BTS sang many of their tracks including Save Me, Butter, Love Myself, Idol, Mikrokosmos, Pied Piper, among others.

The concert was also attended by singer Halsey who collaborated with BTS for their track Boy With Luv. Several clips from the concert showed Halsey waving and blowing kisses at the BTS members from the audience. Also read: BTS member RM accepts James Corden's apology over his '15-year-old girls' remark on ARMY

Taking to her Instagram Stories, Halsey shared a clip from the concert and wrote, "Uncle gang (rock on emoji) beyond words (army bomb emoji)."

The K pop group has ended their round of Los Angeles concerts with the last one on Thursday night. This concert was the group's first international concert since the Covid 19 pandemic.