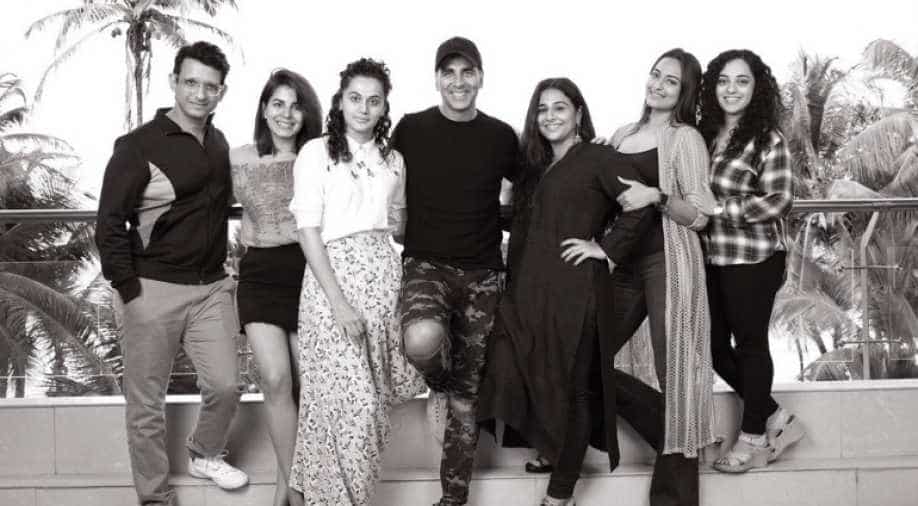 Akshay Kumar posted this photo as he announced the star-cast of his next 'Mission Mangal'. Photograph:( Twitter )

Akshay Kumar’s next film ‘Mission Mangal’ has landed itself in a controversy even before it could go on floors.

According to a report published in Mumbai-based daily, a US-based filmmaker Radha Bharadwaj has filed a lawsuit to halt production of the film as she claims it has been borrowed from her script. She has also called out Atul Kasbekar for sharing her screenplay with cast member Vidya Balan without her approval.

According to the report, Radha has alleged that ‘Mission Mangal’ infringes on the copyright of her original screenplay that she had shared with Atul in 2016. She has claimed that Atul’s studio Ellipsis Entertainment shared the script with Vidya, who happens to be a part of the film.

Apparently, Radha had registered the script with the US Copyright Office in 2016 for the US and Indian market and has completed shooting of her film, ‘Space MOMs’. The film revolves around the women engineers working on the mission, which sort of hints at the number of women who are part of the cast of ‘Mission Mangal’.

Radha’s lawyer Srishti Ojha had revealed to the daily that she had come in contact with Atul’s studio regarding the film in 2016 and the firm had even signed a non-disclosure agreement.

Akshay had recently announced the cast of the film, which got a lot of praise on social media for getting together an ensemble cast including Sonakshi Sinha, Vidya Balan, Taapsee Pannu, Sharman Joshi, Kirti Kulhari and Nithya Menen.

Proud and excited to bring the story of India’s Mars Mission, #MissionMangal to you. Coincidentally the mission was launched on this very date, 5th Nov. 2013. Meet the team and do share your best wishes for our shubh mangal journey. Shoot begins soon 🙏🏻 @foxstarhindi pic.twitter.com/SYfSmoZEdb

The film was back in news again when Akshay revealed that the film will come out on the Indian Independence Day in 2019m shifting dates for Brahmastra which had earlier picked up the spot. Akshay had then tweeted: “A powerful true story of ordinary people with extraordinary dreams, on an unheard of mission to achieve the impossible. #MissionMangal will come alive on 15th August 2019. See you at the theatres.

A powerful true story of ordinary people with extraordinary dreams, on an unheard of mission to achieve the impossible. #MissionMangal will come alive on 15th August, 2019. See you at the theaters. @foxstarhindi