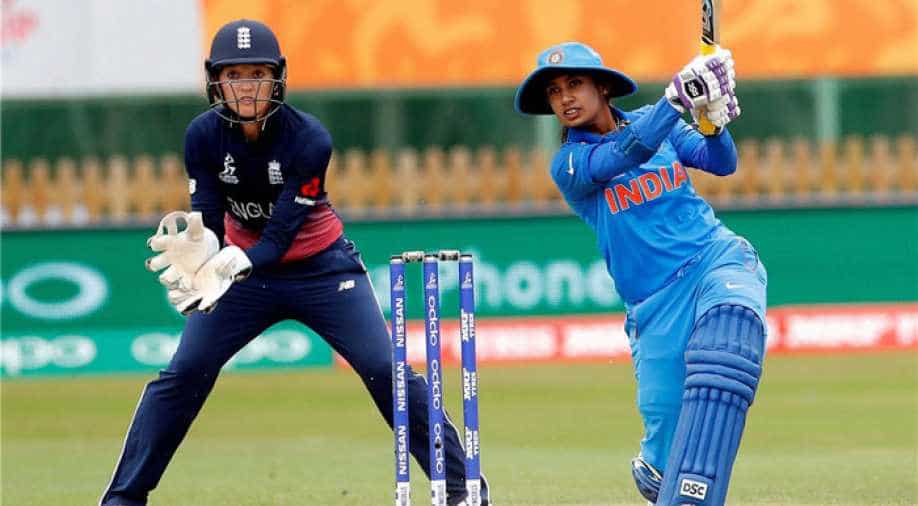 India have won their two opening games. Pakistan have lost theirs, so the pressure will be on them. In photo: Indian skipper Mithali Raj bats against England. Photograph:( Zee News Network )

India and Pakistan take each other on today at the ICC Women's Cricket World Cup being played in England.

India has so far won their two opening games.

They beat England in the opening game by 35 runs and then beat the West Indies by seven wickets.

Pakistan on the other hand lost both their opening games -- to South Africa and England.

So the pressure will be on Pakistan; they need to win.

Furthermore, the two countries have so far played each other nine times at the World Cup -- with India winning every single time. Which is not going to help ease the pressure.

"Playing against India there is always pressure. It is a big game but I am very hopeful of doing much better against India. We beat India in India in the last T20. I believe in my spinners that they will bounce back and take wickets, and we will win the match. Ayesha batted well and gained confidence, which is important before the game against India," said Pakistan all-rounder Asmavia.

"We are looking forward to the next game, whole Pakistan. In Pakistan they say that you have to win against India, it is very important. We took some positives (from the game against England). Our fast bowling did well, Ayesha played well. But there are many areas to improve, especially fielding, which is letting us down. If we field well, we can beat any team," she added.

The Indian skipper Mithali Raj responded to that with: "We need to work on our catching, fielding is very crucial and it can win us matches. I'm very pleased with the way the girls responded with crucial run-outs against the West Indies even though there were a couple of lapses in the field (drops). We still have a couple of games more before we can look to the semi-finals and looking at how Sri Lanka has played and how Pakistan has played, every match is going to be crucial for us."

Social media meanwhile has been abuzz with excitement. See tweets below:

#CT17 has come to an end past week. Now its another big event for women's cricket #ICCWomensWorldCup starting today with the group stages. pic.twitter.com/C7UDDdWtaY

Wishes to the @BCCIWomen fr the world cup. Hope they will do their best nd bring the cup 2 our country. #ICCWomensWorldCup #BleedBlue ????????