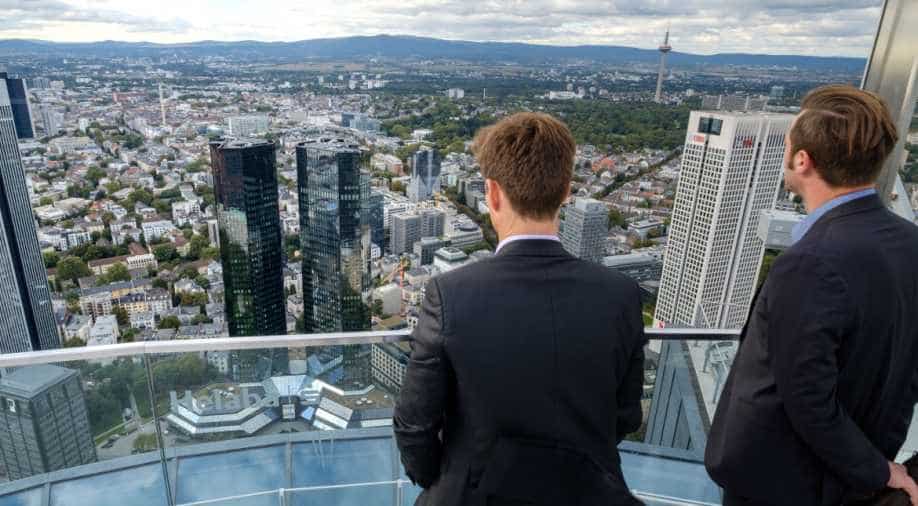 Two men stand at the viewing platform of the "Maintower" and look to the headquarters of Deutsche Bank (C) on October 5, 2016 in Frankfurt, Germany. Photograph:( Getty )

Credit Suisse and Deutsche Bank have been hit with a combined penalty of more than $12 billion over the sale of US toxic debt, further hampering two of Europe's leading investment banks as they grapple with falling profits.

The penalty puts them at a further disadvantage to larger US rivals.

Credit Suisse agreed in principle to pay US authorities $2.48 billion to settle claims it misled investors in residential mortgage-backed securities it sold in the run-up to the 2008 financial crisis, the Swiss bank said on Friday.

Credit Suisse will also provide $2.8 billion from the settlement over five years to offset the impact on consumers, it said in a statement, adding the deal was subject to negotiation of final documentation and approval by its board of directors.

"Credit Suisse will take a pre-tax charge of approximately $2 billion in addition to its existing reserves against these matters. This will be taken in our 4Q 2016 financial results," it added.

The final deal is in line with the $5 billion-7 billion the US Department of Justice (DOJ) had asked Credit Suisse to pay earlier in negotiations, as reported by Reuters on Monday.

The news came after Deutsche Bank agreed to a $7.2 billion settlement with the DOJ over its sale and pooling of toxic mortgage securities.

The agreement in principle, announced by Deutsche Bank's Frankfurt headquarters early on Friday morning, offers some relief to the German lender, whose stock was hit hard in September after it acknowledged the Justice Department had been seeking nearly twice as much.

The deals are the latest the Justice Department has reached with major financial institutions since US President Barack Obama’s 2012 initiative to hold Wall Street accountable for misconduct in the mortgage securities market that helped lead to the worst financial crisis since the Great Depression.

The department sued Barclays PLC on Thursday over similar claims. Barclays said on Friday that it rejected the DoJ's complaint, would "vigorously defend" the case and sought its dismissal "at the earliest opportunity".

Credit Suisse had paid a $2.8 billion fine in 2014 for helping wealthy Americans evade tax. Credit Suisse in November said it had upped litigation provisions by 357 million francs ($348.29 million), mainly in connection with mortgage-related matters. Its shares were indicated 2.4 per cent higher in pre-market trading.