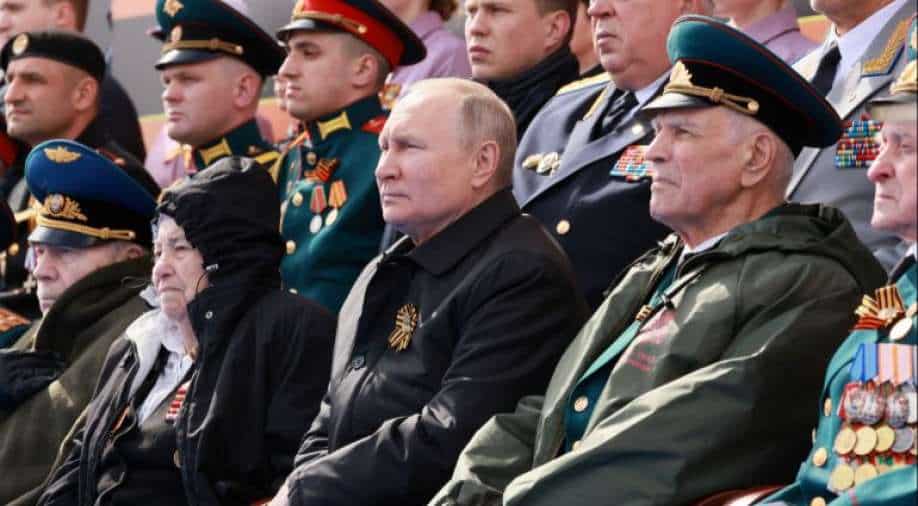 Russian President Vladimir Putin watches a military parade on Victory Day, which marks the 77th anniversary of the victory over Nazi Germany in World War Two, in Red Square in central Moscow, Russia May 9, 2022. Photograph:( Reuters )

As he launched the annual parade commemorating the triumph over Nazi Germany in World War II, Putin claimed Russian servicemen in Ukraine were defending the Motherland from a "absolutely unacceptable threat."

On Monday, Russia commemorates its 1945 victory over Nazi Germany with a military display, even as its army confronts Kyiv's soldiers in Ukraine's east.

During the ceremony, Russian President Vladimir Putin stated that Russian troops and volunteers fighting in the Donbass region of Ukraine are fighting for their Motherland.

"You are fighting for your Motherland, its future.The death of every soldier and officer is painful for us.The state will do everything to take care of these families," he said.

Putin claims that the West is planning a punitive attack in Donbas, Ukraine's eastern region, where Russia's military actions are now concentrated.

He said Russia "urged Europe to find a fair compromise, but they didn't want to hear us".

"In Kyiv they were saying they might get nuclear weapons and NATO started exploring the lands close to us and that became an obvious threat to our country and to our borders," Putin adds. "Everything was telling us that there is a need to fight."

In front of nearly 10,000 troops, Russian President Vladimir Putin reiterated his justifications for the country's "special military operation" in Ukraine, alleging that the West was planning an attack on Crimea and that Moscow had "no other choice."

"NATO countries did not want to listen to us. They had different plans, and we saw them. They were planning an invasion of our historic lands, including Crimea … Russia gave a preemptive rebuff to aggression. It was a forced, timely, and only right decision.

As he launched the annual parade commemorating the triumph over Nazi Germany in World War II, Putin claimed Russian servicemen in Ukraine were defending the Motherland from a "absolutely unacceptable threat."

Putin told tens of thousands of servicemen assembled in Moscow's Red Square that Russian forces in Ukraine were still fighting Nazism, but that it was crucial to "do all possible" to prevent another global conflict.

"You are fighting for the motherland, for its future, for no one to forget the lessons of World War II," Putin told Russian servicemen who had returned from the war in Ukraine.

"For Russia, For Victory, Hurrah!" he exclaimed to the assembled warriors as he concluded his address.