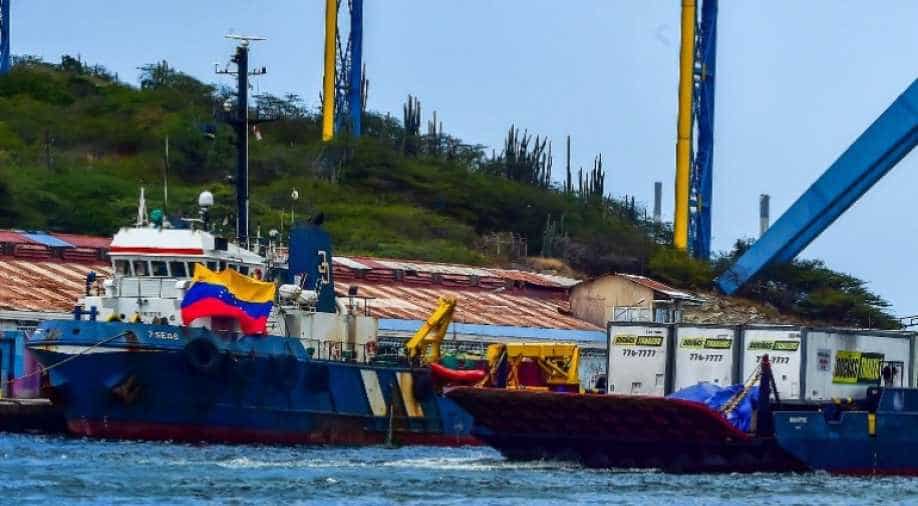 The Midnight Stone supply ship arrives from Puerto Rico with aid for Venezuela at the port of Willemstad, Curaçao. Photograph:( AFP )

A boat carrying aid from the United States docked at the island of Curacao on Sunday after officials said the Venezuelan military had stopped it reaching the crisis-hit country.

The shipment was part of a broader drive to take food and medicine into Venezuela in defiance of its President Nicolas Maduro.

Supporters of Venezuela's self-declared president Juan Guaido said it had sailed from Puerto Rico on Wednesday bound for Venezuela with 250 tons of aid.

Puerto Rico's governor Ricardo Rossello on Saturday said a Venezuelan navy vessel had threatened to fire at the boat as it approached Venezuela.

He said he had ordered the aid vessel to "leave the area temporarily." The sea shipments coincided with opposition efforts to truck aid into Venezuela by land.

Those bids led to bloody confrontations at the borders with Colombia and Brazil on Saturday. Maduro has branded Guaido's aid effort a "show" and a smokescreen for a US invasion.

He has ordered Venezuela's sea border with Curacao to be closed. The opposition and foreign powers backing Guaido say Maduro must let aid into Venezuela to relieve people suffering from shortages caused by an economic crisis.

Maduro blames US policies and sanctions for Venezuela's economic woes. Venezuelans in Curacao have also loaded a further 50 tons of aid onto a separate ship there, the Seven Seas.

Its captain told AFP on Sunday he would not sail for Venezuela with the shipment until authorities there opened the border.