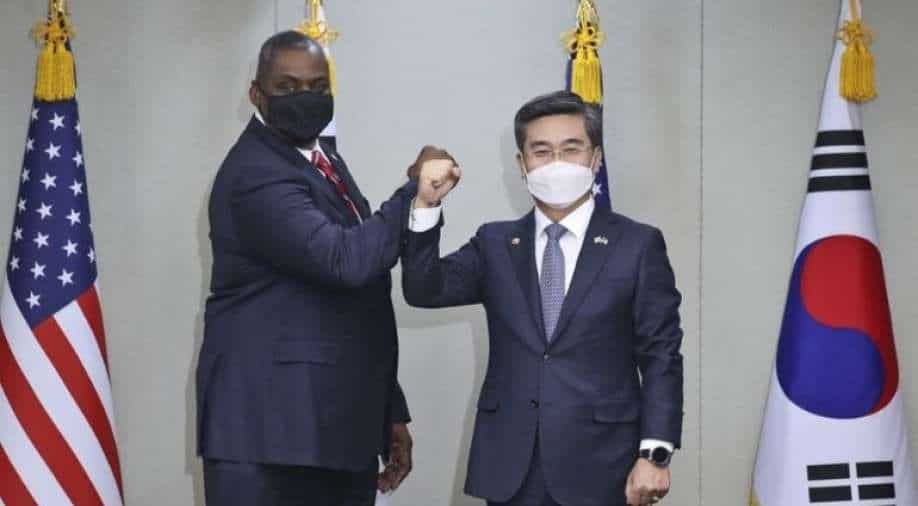 US Secretary of Defense Lloyd Austin (L) and South Korean Defence Minister Suh Wook (R) pose for a photo during their meeting at the Defence Ministry in Seoul Photograph:( AFP )

US Defence Secretary Lloyd Austin said on Wednesday that Washington's alliance with South Korea is ever more important because of growing security concerns over China and North Korea.

South Korean Defence Minister Suh Wook said it was important for the allies to maintain a strong deterrence and joint defence posture against North Korea.

The Biden administration is focused on rallying alliances with its key Asian partners to counter a rising China.

North Korea is likely to move up the agenda in the South, where the US stations 28,500 troops to defend it against its neighbour.

Meanwhile, in North Korea's first comments directed at the Biden administration, Kim Jong Un's powerful sister on Tuesday warned the US to "refrain from causing a stink" if it wants to "sleep in peace" for the next four years.

Kim Yo Jong, a senior official who handles inter-Korean affairs, also criticised the US and South Korea for holding military exercises. She also said the North would consider abandoning a 2018 bilateral agreement on reducing military tensions and abolish a decades-old ruling party unit tasked to handle inter-Korean relations if it no longer had to cooperate with the South.

She said the North would also consider scrapping an office that handled South Korean tours to the North's scenic Diamond Mountain, which Seoul suspended in 2008 after a North Korean guard fatally shot a South Korean tourist.

The US envoys will meet on Thursday with President Moon Jae-in, who brokered the process between Kim and former US president Donald Trump in 2018.

A senior official from the Biden administration said on Saturday that US officials have tried to reach out to North Korea through multiple channels since last month, but had yet to receive a response.

The South Korean and US militaries began annual military exercises last week that will continue through Thursday.

The drills are command post exercises and computerised simulation and don't involve field training. They said they held the downsized drills after reviewing factors like the status of COVID-19 and diplomatic efforts to resume the nuclear talks with North Korea.

The new US administration is expected to wrap up a review of North Korea policy in coming weeks. And Blinken said Washington is considering whether additional pressure on North Korea could be effective.

Trump's unorthodox approach to foreign policy saw him trade insults and threats of war with Kim Jong Un before an extraordinary diplomatic bromance that saw a series of headline-grabbing meetings.

But ultimately no progress was made towards Washington's declared aim of denuclearising North Korea, with a second summit in Hanoi in early 2019 breaking up without an agreement and Pyongyang still under multiple international sanctions for its banned weapons programmes.

Blinken and Austin will consult on a review of Washington's policy towards the North being carried out by the new administration.

But subtle differences between Washington and Seoul could be seen in their readouts of the defence chiefs' meeting on Wednesday.

On the other hand, Seoul's defence ministry said that they had "shared objectives of achieving the complete denuclearisation of the Korean peninsula and a permanent peace in the region".

The specific "North Korea" phrasing used by Washington is anathema to Pyongyang, which prefers the broader and more ambiguous reference to the peninsula as a whole, terminology that could be taken to include the US nuclear umbrella over the South.

The difference threatens to put Seoul on the horns of a diplomatic dilemma: since Hanoi, Moon's administration has repeatedly tried to reach out to Pyongyang but has been regularly rebuffed.