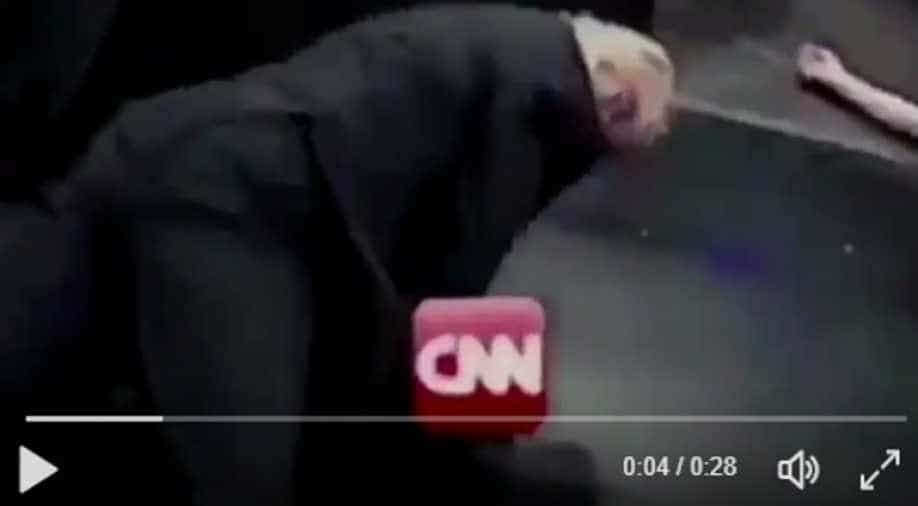 Here is a still of the US President, from a doctored video he circulated on Twitter, physically assaulting a stand-in for the media organisation, CNN. Photograph:( Others )

The original meme was made by a Reddit user named HansAssholeSolo, who in his threads has made jokes about killing cats, stabbing Muslims, and has used virulently homophobic and racist language ||The White House has not explained how they discovered this meme

President Donald Trump stepped up his attacks on the media on Sunday by tweeting a video of himself tackling and repeatedly striking a man with a CNN logo super-imposed in place of his head, followed by a logo saying "Fraud News Network".

The video appeared to be a modified version of a 2007 appearance by Trump at World Wrestling Entertainment's WrestleMania 23 promotion, in which Trump "takes down" WWE Chairman Vince McMahon. In Sunday's video, McMahon's head has been replaced with the CNN logo.

The video of the Republican president attacking media comes weeks after Greg Gianforte, then a Republican candidate in Montana's special election, apologised for "body slamming" a reporter from The Guardian, Ben Jacobs. One day after this literal attack on the media, Gianforte won the election.

In under 24 hours, Trump's tweet of him attacking the media has been retweeted 286,000 times.

My use of social media is not Presidential - it’s MODERN DAY PRESIDENTIAL. Make America Great Again!

The original meme was created by someone with the Reddit handle "HansAssholeSolo", who when he found out Trump retweeted him responded, “Wow! I never expected my meme to be retweeted by the God Emporer (sic) Himself!!!”

HansAssholeSolo in Reddit threads has made jokes about killing cats, stabbing Muslims, and has used virulently homophobic and racist language.

The White House has not explained how he or his staff discovered this meme.

After Trump appears to beat on the CNN effigy, a logo, "FNN Fraud News Network" appears at the bottom of the screen in script similar to that of CNN.

Since becoming president, Trump has fired the attorney general for not implementing his "Muslim Ban", the FBI Director tasked with investigating his links to Russia, and has repeatedly demonised the media, calling it "the enemy of the American people" and frequently referring to mainstream news organisations as "failing" or "fake news".

Since his presidency CNN and the New York Times, who the president often calls "failing", have seen a sharp increase in viewership and subscriptions, respectively.

Trump often says "Many people are saying" to support his claims, without saying who they are. But when he does cite evidence he leans on conspiracy theorists like Alex Jones or the website Breitbart. Several memebers of Breitbart have since become members of his White House team, including "chief strategist" Steve Bannon.

White House homeland security and counterterrorism adviser Thomas Bossert said the tweet was not a threat.

"I think that no one would perceive that as a threat. I hope they don't,” Bossert said on the ABC program "This Week."

"But I do think that he's beaten up in a way on cable platforms that he has a right to respond to," Bossert said.

CNN responded with a statement, saying: "It is a sad day when the President of the United States encourages violence against reporters."

Also worth remembering: Trump has praised both Putin and Erdogan, who respectively murder and jail journalists under their despotic regimes.

"Instead of preparing for his overseas trip, his first meeting with Vladimir Putin, dealing with North Korea and working on his health care bill, he is instead involved in juvenile behavior far below the dignity of his office," CNN said. Trump leaves later this week for a trip to Poland and Germany, where he will attend a meeting of Group of 20 leaders including the Russian president.

The Reporters Committee for Freedom of the Press, a group that advocates for journalists' rights, condemned the president's tweet and said it "glorified physical violence against members of the press".

Bill Kristol, the conservative commentator and editor-at-large of The Weekly Standard, compared Trump's actions to behaviour that caused the fall of the Roman Empire.

The speed with which we're recapitulating the decline and fall of Rome is impressive. What took Rome centuries we're achieving in months. https://t.co/4TVXc4C5Ex

Trump, who is spending a long weekend at his property in Bedminster, New Jersey, took to Twitter on Saturday to call the media "fake" and "fraudulent".

At an event honouring veterans at the Kennedy Center in Washington on Saturday evening, he told the crowd that the media had tried to stop him from coming to the White House.