US Republican candidate allegedly 'body slammed' journalist from The Guardian 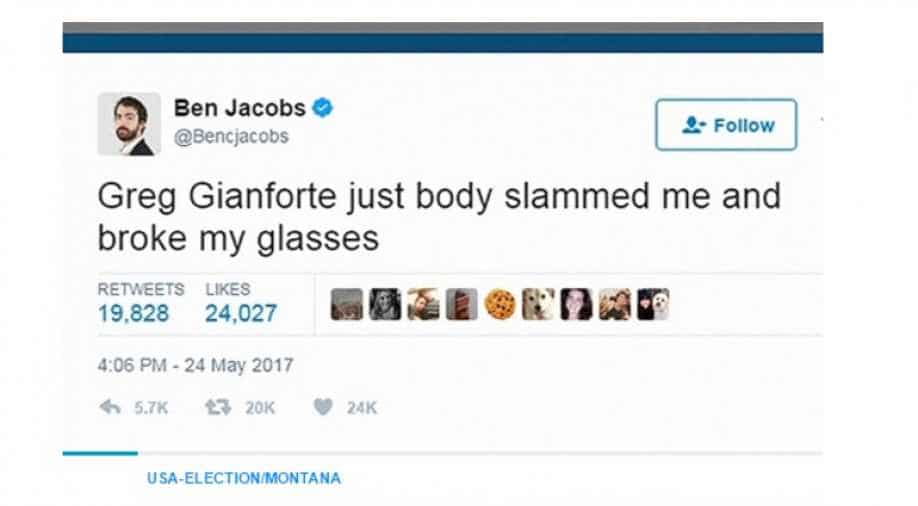 This is the tweet by The Guardian reporter Ben Jacobs, alleging he was assaulted by Greg Gianforte, the Republican candidate running in a special election in Montana. Photograph:( Twitter )

The reporter, Jacobs, claims he was body-slammed, told to 'Get the hell out' & that his glasses were broken ||Other journalists at the scene corroborate Jacobs' story ||The politician's spokesman's account differs from theirs & from an audio recording ||This took place a night before the special election

On Thursday evening there will be a special election in Montana, Nevada to decide who will fill the only vacant seat in the US House of Representatives. This alone wouldn't warrant being international news, but that changed when at a campaign even the top Republican candidate, Greg Gianforte, was charged with misdemeanour assault after he allegedly "body slammed" a reporter from The Guardian, Ben Jacobs.

The accounts of what exactly transpired differ.

Jacobs' account is backed by Fox News reporters and other who witnessed the scene. While there is no video footage of the incident, an audio recording also backs up Jacobs' account and contradicts the account given by Gianforte's spokesperson, both given below.

Jacobs claims he was asking a question about the Republican healthcare plan, when the candidate "body-slammed" him, telling him to "get the hell out of here" while also breaking his glasses.

Jacobs said to The Guardian, speaking from the back of an ambulance, that, "I think he wailed on me once or twice...he got on me and I think he hit me...This is the strangest thing that has ever happened to me in reporting on politics."

Greg Gianforte just body slammed me and broke my glasses

A campaign spokesman blamed Jacobs for the incident, saying that the reporter "entered the office without permission, aggressively shoved a recorder in Greg's face, and began asking badgering questions.

"Jacobs was asked to leave.

"After asking Jacobs to lower the recorder, Jacobs declined. Greg then attempted to grab the phone that was pushed in his face. Jacobs then grabbed Greg's wrist, and spun away from Greg, pushing them both to the ground.

"It's unfortunate that this aggressive behaviour from a liberal journalist created this scene at our campaign volunteer BBQ."

Here is the audio recording of the incident and the few seconds leading up to it posted to YouTube by The Guardian. Judge for yourself if you hear Gianforte ask Jacobs to lower the recorder (or "phone", as in microphone) before the altercation begins.

This is not the first time this journalist and this politican have come together. NBC News reports that last month, Jacobs reported that Gianforte owns about $250,000 in shares in two index funds that have investments in Russian companies that are under US sanction.

A victory for the Democratic nominee Rob Quist, who Reuters characterises as a "banjo-playing political novice", in Republican stronghold Montana could signal trouble ahead for President Donald Trump and his fellow Republicans as they defend their 24-seat House majority in the 2018 mid-term elections.

Quist and Gianforte are vying for the House seat vacated after Trump named Ryan Zinke as US interior secretary.