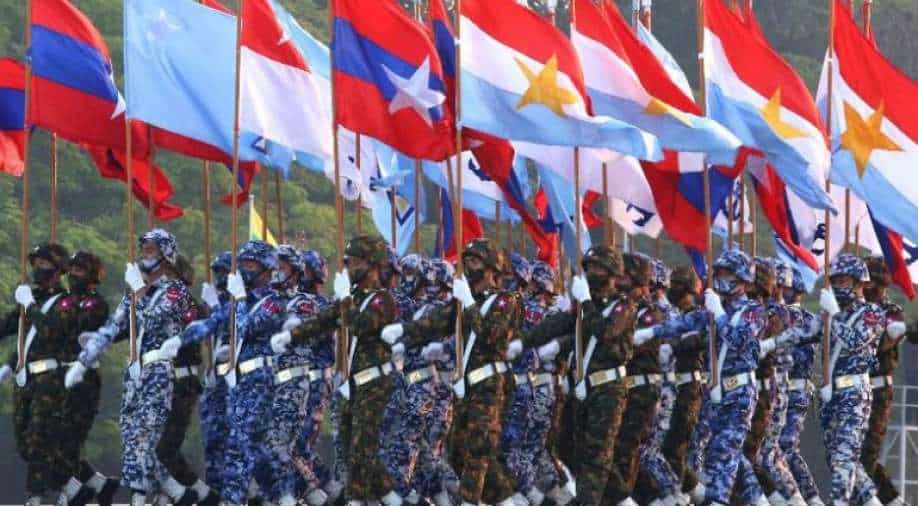 Special Rapporteur urges UN vote "on a resolution to at a minimum ban those arms transfers that the Myanmar military are known to use to attack and kill Myanmar civilians" Photograph:( AFP )

He released a long-awaited report Tuesday detailing where the junta is getting its weapons from, highlighting that two permanent members of the Security Council itself, who hold veto power over its decisions, remain among the main suppliers

United Nations Special Rapporteur on the rights situation in Myanmar, Tom Andrews, urged the Security Council to convene an emergency session "to debate and vote on a resolution to, at a minimum, ban those arms transfers that the Myanmar military are known to use to attack and kill Myanmar civilians."

He released a long-awaited report Tuesday detailing where the junta is getting its weapons from, highlighting that two permanent members of the Security Council itself, who hold veto power over its decisions, remain among the main suppliers.

"Despite the evidence of the military junta's atrocity crimes being committed with impunity since launching a coup last year, UN Security Council members Russia and China continue to provide the Myanmar military junta with numerous fighter jets, armoured vehicles, and in the case of Russia, the promise of further arms," Andrews said in a statement.

"During this same period, Serbia has authorised rockets and artillery for export to the Myanmar military," said Andrews, who is an independent expert appointed by the UN Human Rights Council, but who does not speak on behalf of the world body.

In his report, he maintained that the arms transfers by the three countries had "occurred with the full knowledge that they would be used to attack civilians, in probable violation of international law."

Myanmar has been in chaos, its economy paralysed, and more than 1,500 civilians have been killed in a military crackdown since the putsch in February 2021, according to the UN.

Andrews reiterated in his report that "there is strong evidence the junta has committed war crimes and crimes against humanity," including murder, sexual violence and torture.

"The situation of human rights in Myanmar is dire and deteriorating," it said.

The report provides an overview of countries that have authorised the transfer of weapons to Myanmar since 2018, when the military's attacks on the Rohingya ethnic minority were widely documented and after a UN fact-finding mission had urged an arms embargo.

Israel, India, Pakistan, South Korea, Belarus and Ukraine also figure on that list, although only China, Russia and Serbia have continued their transfers since the coup.

The UN General Assembly adopted a resolution last June calling for countries to prevent the flow of arms to Myanmar, but Andrews said that it had failed to have "any discernible impact on the crisis and the capacity of the junta to launch attacks on civilians."

He pointed out that while none of the Security Council members had voted against that resolution, the council had also not even considered voting to make the text binding for member states.

"It is imperative that member states and the Security Council act urgently to stop weapons sales to the military junta. Human lives, and Security Council credibility, are on the line," he said.

The report acknowledges that China and Russia might very well use their veto power to block any such text, but stressed that this "should not deter other members from placing a resolution before the Council for consideration, debate and a vote."

"The people of Myanmar deserve to have a strong resolution."

"The Security Council should consider, at the very least, a resolution to ban weapons that are being used by the Myanmar military to kill innocent people," Andrews said.