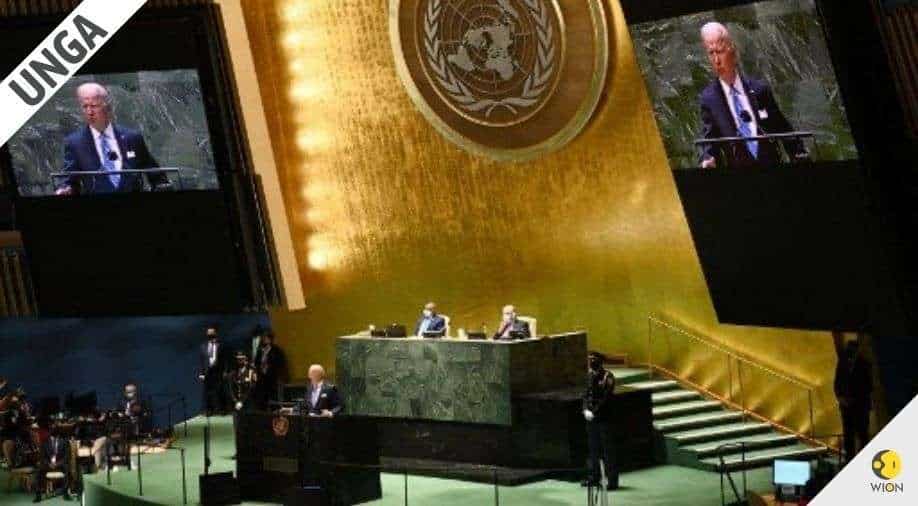 US President Joe Biden addresses the 76th Session of the UN General Assembly on Tuesday in New York Photograph:( AFP )

Making specific references to the human rights abuses of Uyghur Muslims in China’s Xinjiang province, Biden spoke about fighting against the repression of religious minorities around the world

Delivering his maiden speech at the United Nations General Assembly, President Joe Biden made it clear that the US would not take a back seat in geopolitics while calling out North Korea and Iran for their attempts to develop nuclear weapons, Beijing’s human rights abuses in Xinjiang, the civil war in Ethiopia and abuse of women’s rights in Afghanistan.

Making specific references to the human rights abuses of Uyghur Muslims in China’s Xinjiang province, Biden spoke about fighting against the repression of religious minorities around the world.

“The US will focus its efforts to find ways to advance human dignity around the world, such as good quality infrastructure,” Biden said.

Making references to China and Russia, Biden said, “All the major powers in the world have a duty to carefully manage their relationships so we do not tip... into conflict.”

The US, he said, will “stand up for our allies and friends against those who try to dominate weaker countries.”

“But we are not seeking a new Cold War or a world divided into rigid blocks,” he said.

“The US is ready to work with any nation that steps up... even if we have intense disagreements in other areas,” he added.

Notably, China’s President Xi Jinping has chosen not to attend the assembly in person, he will instead join virtually.

He also highlighted the American re-engagement with the Paris Accords, with the threat of climate change— a recurring theme of his speech.