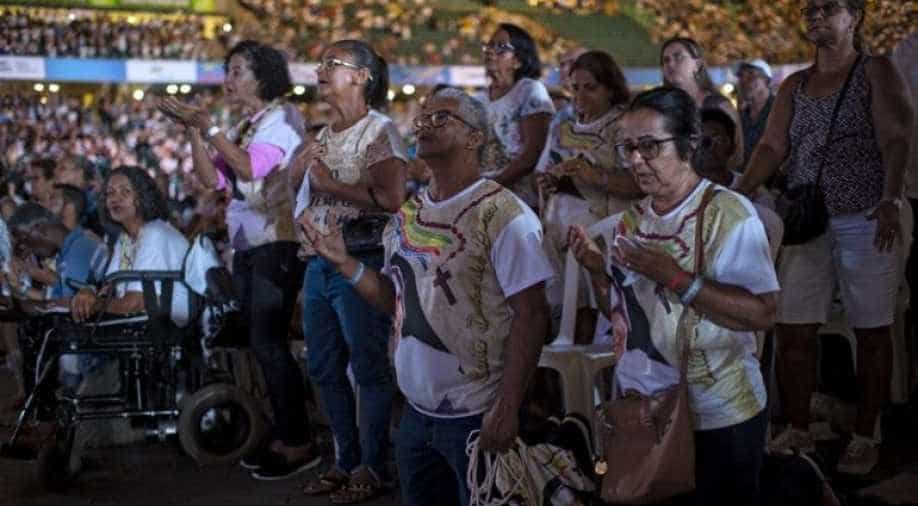 Sister Dulce, as she is affectionately known in the world's biggest mostly Catholic country, was one of five people elevated by the pope to the highest position within the church on October 13.

Tens of thousands of Catholic faithful flocked to a football stadium in Brazil Sunday to celebrate the Vatican's canonization into sainthood of Sister Dulce Lopes Pontes, dubbed the "mother of the poor."

Sister Dulce, as she is affectionately known in the world's biggest mostly Catholic country, was one of five people elevated by the pope to the highest position within the church on October 13.

But for many devotees in hot and humid Salvador, where Sister Dulce was born in Brazil's northeast in 1914, the nun was a saint long before the Vatican recognized her two "miracles".

"Now, everyone sees her as a saint. But for all the work that she did, for us, she was always a saint," Creusa Costa, 59, told AFP, as she decorated a statue of Sister Dulce with flowers at the entrance of her sanctuary in a poor neighborhood of the capital of Bahia state.

Most new saints must have two "miracles" to their names, usually, scientifically inexplicable healings, attributed to prayers.

Sister Dulce, who died in 1992, is the first Brazilian-born female saint.

She is credited with stopping a woman from haemorrhaging after giving birth and returning the vision of a man who had been blind for years.

In the week since the Vatican ceremony, the number of people paying homage to Sister Dulce at her shrine in the coastal city has surged.

Believers from across the country take pictures of the white and blue habit worn by the nun when she was buried or talk to her in the room where her remains are kept beneath a ceramic replica of her body.

"She is in heaven, but she's looking after us even more than when she was here," said Maria Silva de Oliveira, who along with Creusa, was involved in decorating the Fonte Nova football stadium, one of the venues for the 2014 World Cup, for a special ceremony organized by the Salvador Archdiocese.

De Oliveira had planned to attend the Vatican sainthood event, but changed her mind after suffering indigestion, which she says "was a message from Sister Dulce."

Born into an upper-middle-class family in Salvador, Sister Dulce started a health clinic for poor workers and opened a school, a hospital, and an orphanage, as well as care centres for the elderly and disabled.

The nun, dubbed the "good angel of Bahia", was a member of the Missionary Sisters of the Immaculate Conception.

She was nominated for the Nobel Peace Prize in 1988.

The year before her death she was visited in hospital by Pope John Paul II, who called her work "an example for humanity".

Since her rise to sainthood, Sister Dulce's face has been plastered all over Salvador, a popular tourist destination.

It appears on signs, T-shirts, hats, rosaries, cups and even the wrapping of sweet Christmas bread.

Multicoloured ribbons that usually pay homage to Senhor do Bomfim, or Lord of the Good End, a representation of Christ revered by Catholics as well as practitioners of the African-rooted Candomble religion, now also carries the name of "Saint Dulce of the Poor."