Ten news events that shaped the world in 2017 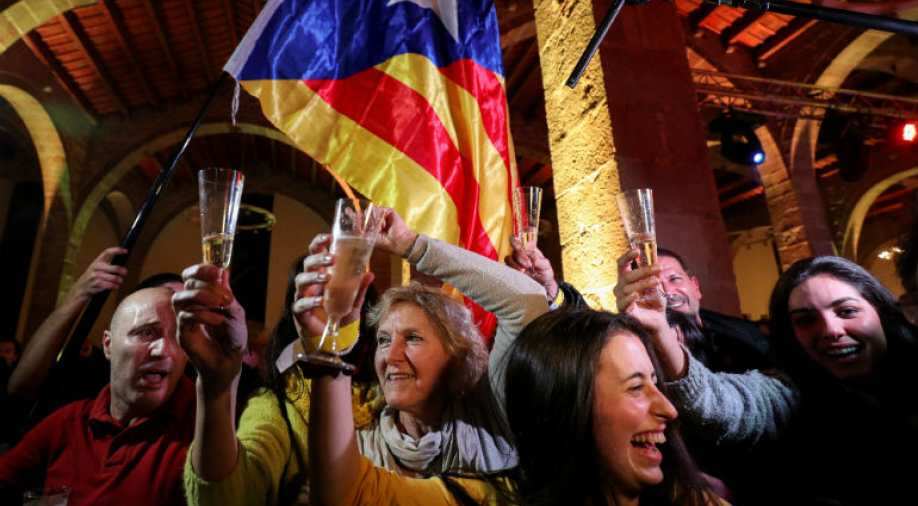 People react to results in Catalonia's regional elections at a gathering of the Catalan National Assembly (ANC) in Barcelona on December 21. Photograph:( Reuters )

The year 2017 has a significant share of world events which has redefined the cultural and political boundaries of the world. From  Robert Mugabe's fall from grace to the rise of Catalan independence movement, many events in 2017 made headlines.

Below are the top ten news events that shaped the world in 2017:

Robert Mugabe's ouster: Mugabe ruled Zimbabwe for thirty seven years and planned to rule for longer, even if that meant running the economy aground and becoming increasingly ruthless. The trigger was Mugabe favouring his wife, Grace Mugabe, to "usurp constitutional power" shoving aside his vice president, Emmerson Mnangagwa. Mugabe clung onto the presidency even after tanks rolled into the streets of country's capital Harare in November. Rather than going out quietly, the man known as "the Crocodile" - because of his ruthlessness - struck back by refusing to vacate his seat despite coming under tremendous pressure from his own party the Zimbabwe African National Union-Patriotic Front (ZANU-PF) and the members of the public who rallied behind for years. He quickly lost the support of his party, and after some hesitation, finally resigned. Zimbabweans rejoiced at the news of his ouster, and Mnangagwa promised to hold new elections next year. But if Mnangagwa's moves are anything to go by, he looks more like his former boss.

Robert Mugabe, who ruled Zimbabwe for 37 years, was forced of power in November. Mugabe is seen here with his wife Grace. (Reuters)

Harvey Weinstein's fall from grace: In early October 2017, The New York Times and The New Yorker reported that dozens of women had accused Harvey Weinstein, a prominent Hollywood film producer and executive, of engaging in sexual harassment, sexual assault, or rape. More than 80 women in the film industry subsequently accused Weinstein of such acts. Weinstein denied "any non-consensual sex". Shortly after the first allegations, Weinstein was dismissed by his company, The Weinstein Company, and expelled from the Academy of Motion Picture Arts and Sciences and other professional associations. Criminal investigations into complaints from at least six women are ongoing in Los Angeles, New York City, and London. The scandal triggered many similar allegations against powerful men around the world and led to the ousting of many of them from their positions. It also led a great number of women to share their own experiences of sexual assault, harassment, or rape on social media under the hashtag #MeToo. The scandal's impact came to be called the "Weinstein effect".

The Rohingya crisis: The Rohingya may be the most persecuted minority group in the world. They have lived in Myanmar for centuries. The latest and ugliest surge of violence began in August when Rohingya began fleeing into neighbouring Bangladesh telling stories of mass killings, systematic rape, and torture. At last count, more than 4,00,000 have fled Myanmar and thousands more have been displaced internally. The Myanmar military denies committing atrocities, insisting that it is combating attacks on police posts and army bases by Rohingya insurgents. But it's clear, as the US government has charged, that the Myanmar government is engaged in ethnic cleansing. Aung San Suu Kyi, a recipient of the Nobel Peace Prize and Myanmar's most prominent political face, has done little publicly to end the violence.

Saudi Arabia's modernisation: Back in June, Saudi Arabia's King Salman made thirty-two-year-old prince Mohammad bin Salman Al Saud his heir, after deposing the previous crown prince, the king's nephew, Mohammed bin Nayef. Prince Saud immediately got to work. His vehicle for remaking the country is Vision 2030, a two-year-old initiative that seeks to modernise Saudi Arabia's economy and society. The idea is to prepare the country for a post-oil future and to loosen its conservative social structure. The former goal has Saudi Arabia proposing to take its state-owned oil company, Saudi Aramco, public, while the latter has it allowing women to drive. Prince Saud moved quickly to consolidate power. In November, he had 11 of his cousins arrested on corruption charges (Their jail cell was a Ritz-Carlton). Some experts think that MBS - as the prince is colloquially known - is Saudi Arabia's best chance for a moderate and prosperous future. Others worry that he is reckless. A lot depends on which side is right.

Hassan Rouhani's election win: Riding a large turnout from Iran's urban middle classes, Rouhani won re-election in a landslide, giving him the mandate to continue his quest to expand personal freedoms and open Iran's ailing economy to global investors. Out of 41 million votes cast, Rouhani won 23 million (or 57 per cent), soundly defeating his chief opponent, Ebrahim Raisi, who received 15.7 million (38.5 per cent). Turnout was heavy, with more than 70 per cent of Iran's 56 million voters casting ballots. After his victory, he said after invoking the name of God, "With more than 41 million of your votes, you have pulled out the history of our country away from inertia and doubt." Rouhani, long known as a cautious and mild-mannered establishment insider, reinvented himself as a bold champion of reform during the election campaign, which culminated in his victory. In his first televised speech after the result, Rouhani appeared to openly defy conservative judges by praising the spiritual leader of the reform camp, former President Mohammad Khatami. A court has banned quoting or naming Khatami on air.

Emmanuel Macron winning France's election: Macron, the pro-European centrist, resoundingly won France's landmark presidential election, heading off a fierce challenge from the far-right in a pivotal vote for the future of the divided country and Europe. The victory was an extraordinary rise for the 39-year-old former investment banker, who became country's youngest-ever leader. The result resonated worldwide, particularly in Brussels and Berlin, where leaders heaved a sigh of relief that Le Pen's anti-EU, anti-globalisation programme has been defeated. After Britain's vote last year to leave the EU and Donald Trump's victory in the US, the French election was widely watched as a test of how high a tide of right-wing nationalism would rise. Outgoing President Francois Hollande, who plucked Macron from obscurity to name him minister in 2014, said voting "is always an important, significant act, heavy with consequences" as he cast his vote.

Catalan independence movement: Although deemed illegal by the Spanish government and Constitutional Court, the referendum was held on October 1, 2017. In a vote where the anti-independence parties called for non-participation, results showed a 90 per cent vote in favour of independence, with a turnout of 43 per cent. Based on this result, on October 27, 2017, Catalonia's Parliament approved a resolution creating an independent Republic unilaterally, by a vote considered illegal by Spain's Parliament. On October 10, 2017, in the aftermath of the referendum, the President of the Generalitat of Catalonia, Carles Puigdemont, declared the independence of Catalonia but left it suspended. On October 21, Spain's Prime Minister Mariano Rajoy announced that he planned to remove Puigdemont and the rest of the Catalonian administration from office, with the central government in Madrid directly ruling over Catalonia until a new President is elected. On October 27, 2017, the Catalan Parliament voted in a secret ballot to approve a resolution declaring independence from Spain by a vote of 70-10 in the absence of the constitutionalist deputies, who refused to participate in a vote considered illegal for violating the decisions of the Constitutional Court of Spain. On December 21, snap polls were held in Catalonia and the pro-independence parties won the majority, though the Catalan Republic is still unrecognised by the international community.

A woman casts her ballot in Catalonia's regional elections on December 21. (Reuters)

North Korea defies the world: Successive US presidents have insisted that they would prevent North Korea from acquiring nuclear weapons. They backed that up by offering carrots, imposing sanctions, and threatening military action. But North Korea hasn't listened. In early September, North Korea conducted its sixth nuclear test. Three months later, it tested a ballistic missile that looks capable of hitting any US city. President Trump says he will stop North Korea in its tracks, vowing that North Korea "will be met with fire and fury like the world has never seen," tweeting that "military solutions are now fully in place, locked and loaded," and calling North Korean leader Kim Jung-un "Little Rocket Man".

People in Seoul watch the news about North Korea's launch of ICBM. (Reuters)

Xi Jinping's "extraordinary elevation": Xi's biggest success came in October at the nineteenth Chinese Communist Party Congress. It was a coronation. Xi was named to his second five-year term as party general secretary. He was also named a "core leader," a title denied to his immediate predecessor, Hu Jintao. The Congress also wrote "Xi Jinping Thought" into the party's constitution, an honour previously bestowed only on Mao Zedong and Deng Xiaoping. Best of all for Xi, the congress ended without naming anyone as his successor. When Trump called Xi "king of China" during his November "state visit-plus," he wasn't far off the mark. Xi is China's most powerful leader since Mao, and he's likely to be around for a while.

Donald Trump's inauguration: Donald Trump campaigned on a pledge to do things differently and to do different things in foreign policy. He has been good to his word since getting to the White House. He has canceled US participation in the Trans-Pacific Partnership, withdrawn the United States from the Paris Climate Agreement, refused to certify that Iran is in compliance with its nuclear obligations, recognised Jerusalem as the capital of Israel, ramped up the use of drones, and relegated democracy and human rights to the sidelines of US foreign policy. To be sure, Trump hasn't enacted all of his campaign promises. He beefed up rather than withdraw US troops from Afghanistan, and he hasn't declared China a currency manipulator or kicked NAFTA to the curb. But his tough campaign trade talk may soon be US policy. Trump is poised to take punitive actions against Chinese trade practices, his demands for a revamped NAFTA look to be unacceptable to Canada and Mexico, and he's waging a low-level war against the World Trade Organisation.

Other stories of note in 2017: In January, Antonio Guterres became the ninth secretary general of the United Nations. In February, Israel announced plans for its first new settlement in the West Bank in more than twenty years. Violent protests wracked Venezuela in April, a critical point in the country's constitutional crisis. The G-20 met in Hamburg in July and failed to agree on climate action. In November, thousands attended a far-right nationalist rally in Warsaw. The Australian Parliament voted in December to legalise same-sex marriage, making Australia the twenty-fifth country to do so.