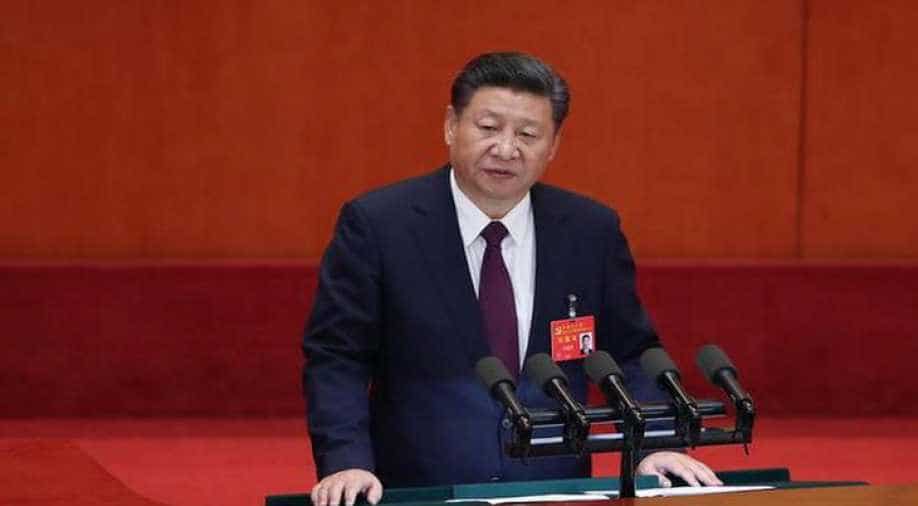 The inclusion of Xi`s eponymous guiding philosophy in the Communist Party constitution could set him on course for an indefinite term as China's paramount leader. Photograph:( Reuters )

Xi Jinping was elevated to the pantheon of China`s most powerful leaders Tuesday as his name was enshrined in the Communist Party constitution alongside Chairman Mao.

The inclusion of Xi`s eponymous guiding philosophy at the end of a week-long congress could set him on course for an indefinite term as China`s paramount leader.

He will now have an even stronger hand to lead the nation into a "new era" in which he envisions it becoming a global superpower with a world-class military by mid-century.

Communist China`s founder Mao Zedong, and the architect of its market reforms, Deng Xiaoping, are the only other Chinese leaders to have their names in the constitution -- and only Mao was alive when his was included.

Xi, 64, presided over the congress`s closing session where some 2,300 delegates approved the constitutional amendment to include "Xi Jinping Thought on Socialism with Chinese Characteristics for a New Era".

The concept places a heavy emphasis on the party`s role in governing every aspect of the country, from the economy to what people are writing on social media.

"We must work tirelessly and forge ahead on the journey of realising the rejuvenation of the Chinese nation," Xi, who is due to be reappointed as party chief on Wednesday, told the congress in concluding remarks.

The honour may allow Xi to stay on as China`s top leader even if he gives up the title of party general secretary when his second term ends in 2022 as tradition demands, analysts said.

Or he could carry on as party leader. Xi`s time as national president must end in 2023 but there is no official restriction on how long a party chief can serve -- although Xi`s two immediate predecessors, Jiang Zemin and Hu Jintao, stepped down after two five-year terms.

Jiang and Hu had their concepts included in the constitution, but without their names and only when they retired.

"China has a tradition of combining emperor and teacher, which means that the emperor is also the thought leader. Xi achieved it at the end of his first term. That`s rare in our history," Chinese political scholar Hu Xingdou told AFP.

Xi also managed to get at least two of his cherished programmes written into the constitution: an anti-corruption campaign that has brought down 1.5 million crooked officials since 2012 and the Belt and Road initiative, the massive global trade infrastructure project intended to increase China`s influence abroad.

The congress declared the Communist Party China`s "absolute leader", a clear sign that it intends to further tighten its grip on the country.

"Those who approve, raise your hands," Xi said during the vote as a flurry of arms shot up in unison. When he asked if anyone was not in favour, shouts of "None!" echoed in the imposing Great Hall of the People.

Xi is certain to secure a second five-year term as general secretary and could also consolidate his power by filling the standing committee with allies, possibly without even presenting an obvious heir apparent.

A vast security apparatus was thrown around the congress, with businesses ranging from nightclubs to gyms closing to avoid any incidents and factories shuttered in what turned out to be a failed attempt to clear the city`s notorious smog.

When he opened the gathering last week, Xi declared that China had entered a "new era" with the ambitious goal of becoming a "global leader" by mid-century.

Xi has sought to portray himself as a responsible global leader while US President Donald Trump trumpets a nationalist "America First" policy and the European Union grapples with Britain`s exit.

His blueprint foresees no change in the single-party political system, and gives no sign that crackdowns on human rights activists will ease.

Some of his goals, such as building a modern military by 2035, go beyond the end of his second term, a hint that he sees himself at the centre of China`s political life for years to come.

At the closing session, Xi said the congress established "the goal of securing a decisive victory in building a moderately prosperous society in all respects and then embarking on a journey to fully build a modern socialist China".Despite Xi`s rising power, the composition of the Politburo Standing Committee, the body that controls power, will still be crucial to his efforts, said Willy Lam, politics professor at the Chinese University of Hong Kong.

Xi and Premier Li Keqiang are expected to remain on the committee while the five other current members are supposed to step down under an informal retirement age set at 68.

There is no agreement among China-watchers about who will end up on the committee, or if anybody will emerge as a potential successor.

If the right allies are named, Lam said, it would show that "he has full control over the Politburo Standing Committee".