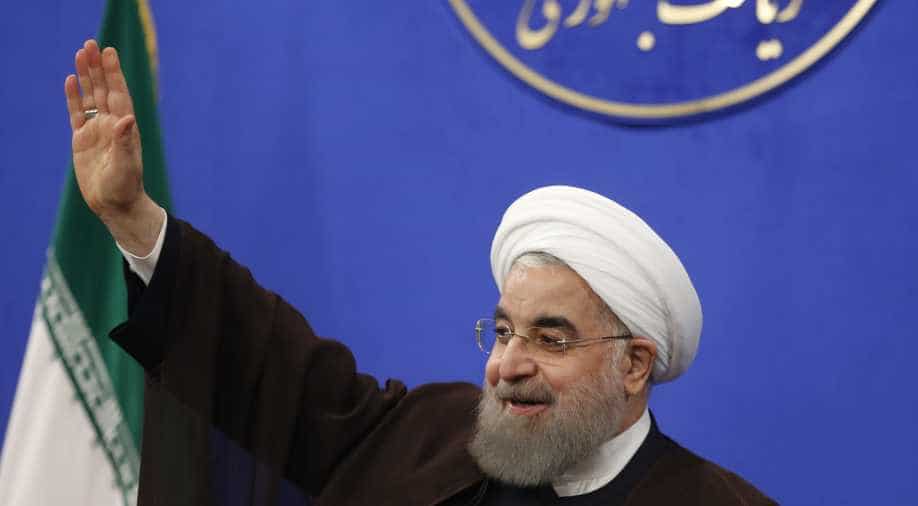 Iran has chosen the "path of engagement with the world" and rejected extremism, President Hassan Rouhani said following his resounding re-election victory on Saturday.

Rouhani, a 68-year-old moderate cleric who spearheaded a 2015 nuclear deal with world powers, said voters had shunned those who wanted to turn the country back to the past.

"The Iranian people want to live in peace and friendship with the rest of the world, but will not accept any threat or humiliation," he said on state television.

With 57 per cent of the vote, Rouhani scored a convincing victory over hardline cleric Ebrahim Raisi on 38.3 per cent.

But he faces a stark challenge from US President Donald Trump, who has threatened to tear up the nuclear deal and reimpose sanctions.

Rouhani made an apparent dig at regional rival Saudi Arabia, which is currently hosting Trump, saying: "Our people have declared to neighbouring countries and the whole region that the path to ensuring security is the reinforcement of democracy and not relying on foreign powers."

There were jubilant scenes in the capital Tehran, with hundreds of young people singing and dancing in the central Vali Asr Square, in spite of police efforts to move them along.

Iranians flocked to the polls on Friday, with the turnout reaching 73 percent and forcing election officials to extend voting by several hours.

Raisi, 56, had cast himself as a defender of the poor and called for a tougher line with the West, but his revolutionary rhetoric and promise of increased handouts gained limited traction.

"They have the maturity to understand that the solution to their country's predicaments are in competent management of the economy and moderation in international relations," Vaez told AFP.

Russia, which fights alongside Iran in support of Syrian President Bashar al-Assad, was among the first to congratulate Rouhani.

President Vladimir Putin sent a telegram confirming "his readiness to continue active joint work... in line with maintaining stability and security in the Middle East and the world as a whole", the Kremlin said.

But European and Asian officials have also welcomed Rouhani's re-election as they pursue lucrative investments in the wake of the nuclear deal, that lifted global sanctions in exchange for curbs to Iran's atomic programme.

EU foreign policy chief Federica Mogherini tweeted her vow to work for greater "engagement, regional peace... (and the) expectations of people in Iran".

"A lot of investors I hadn't heard from for three months were suddenly phoning me this morning. Some are already in the process of booking their tickets," said Farid Dehdilani, international adviser for the Iranian Privatisation Organisation.

'Era of extremism over'

Rouhani put civil liberties at the heart of his campaign, and pointedly thanked reformist former president Mohammed Khatami, who has been banned from appearing in the media since supporting mass protests in 2009, in his acceptance speech.

He pushed boundaries over the past fortnight with his veiled criticism of the conservative-dominated judiciary and security services, telling supporters: "We've entered this election to tell those practising violence and extremism that your era is over."

"I think he'll make the cabinet younger and more agile."

Although Rouhani brought inflation down from around 40 percent when he took office in 2013, prices are still rising at nine percent a year.

Oil sales have rebounded since the nuclear deal took effect in January last year, but growth in the rest of the economy has been limited, leaving unemployment at 12.5 percent overall, and at almost 30 percent among young people.

"Not everyone who voted for Rouhani thought his record was excellent, but the majority decided his competitor would be even worse," said Tehran University political researcher Foad Izadi.