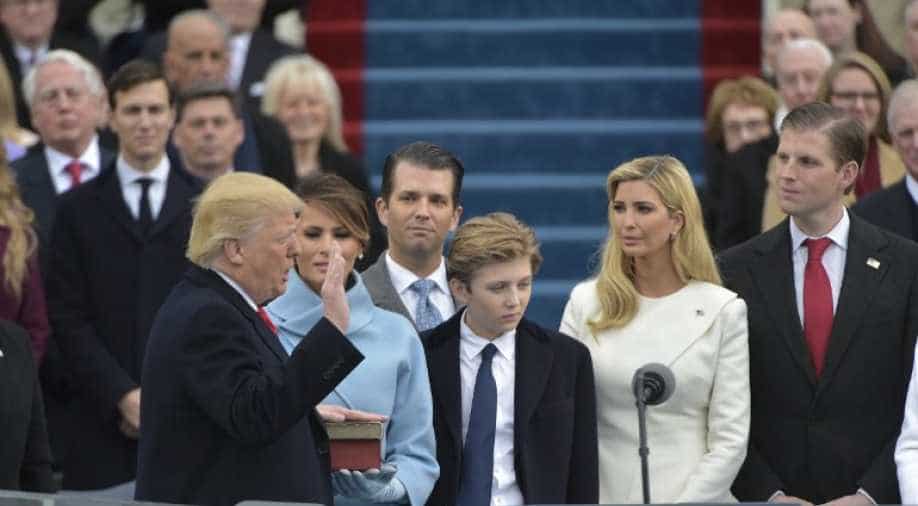 Donald Trump is sworn in as President at the US Capitol in Washington on January 20. Photograph:( AFP )

With grey clouds hanging over the famous white dome of the US Capitol building, Donald Trump made his inaugural address to the American people as their new president.

"January 20th, 2017, will be remembered as the day the people became the rulers of this nation again," said Trump from his podium overlooking the crowds gathered on the National Mall.

"The forgotten men and women of our country will be forgotten no longer," he added.

An estimated 800,000 people had crushed into the centre of Washington, DC for the 58th US Presidential Inauguration, sheltering from the drizzle under raincoats and ponchos.

A steel ring of security encircled the centre of the city, with roads blocked off and police on every corner.

But tight security and showers failed to dampen the enthusiasm of Trump's supporters.

"Trump is going to 'Make America Great Again' and undo the wreckage of Obama," said Joe Smith, 69, from Tampa, Florida.

"I believe that the enemies of this country have been allowed to fester for too long, and Donald Trump is going to change that," said Nick Graham, 20, from Pasadena, Maryland.

Crammed in next to Trump's supporters, Clinton voters looked on solemnly while protestors chanted.

"We came today to show that we are not giving our consent for this presidency," Erica West, 21, from Arlington, Virginia.

"Donald Trump stands for hatred, racism and misogyny. That's against everything that I stand for as a citizen of this country," said Kevin Cannell, 31, from New Orleans.

At a Black Lives Matter demonstration in a small park just off the National Mall, impromptu arguments broke out between protesters and passing Trump supporters in "Make America Great Again" hats.

As the hour of the inauguration ceremony approached, demonstrators linked arms to block the route to the viewing area.

They chanted "this checkpoint is closed, go home" as police tried to break up the line to allow spectators through.

As news of Trump taking the oath at the US Capitol spread, cheers and booing broke out spontaneously in the streets.

With the traditional parade to the White House underway, protestors also clashed with police along the route.

8 years after Barack Obama swept into power riding a message of hope, Donald Trump is taking charge of a divided America.

The wounds from a bitter election were still fresh for many on his Inauguration Day.

But Trump says he can bring the country together again.

"We are one nation...we share one heart, one home, and one glorious destiny," said Trump in his inaugural address.

But just hours before the handover of power, a Fox News survey put Trump's approval ratings at 37 per cent.

54 per cent say they do not approve of the country's new president.

With historically low ratings for a first-time president, Trump's first 100 days could define his time in office.

The fractious atmosphere at his inauguration shows that the fervour of his supporters is matched by the anger of his opponents.