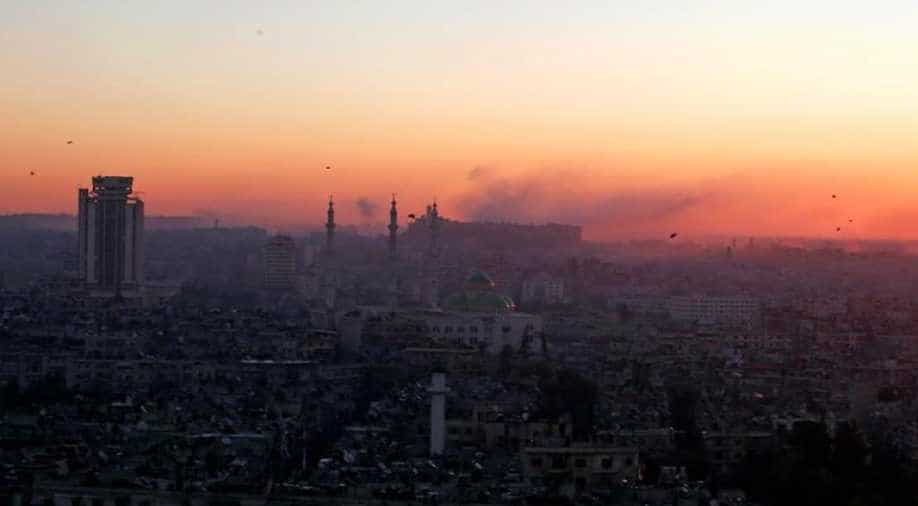 Smoke rises near Aleppo''s historic citadel, as seen from a government-controlled area of Aleppo during sunrise. Photograph:( Reuters )

Syria’s army and allies pushed into rebel-held parts of Aleppo's Old City on Tuesday, a monitoring group said, looking closer than ever to achieving their most important victory of the five-year-old civil war by driving rebels out of their last urban stronghold.

A rebel official said they would never abandon Aleppo, after reports that US and Russian diplomats were preparing to discuss the surrender and evacuation of insurgents from territory they have held for years.

Russian Foreign Minister Sergei Lavrov said talks with the United States on a rebel withdrawal would begin in Geneva as soon as Tuesday evening or Wednesday morning.

But sources familiar with the plans later told Reuters no talks would take place this week in the Swiss city.

The rebels, who controlled large parts of eastern Aleppo for nearly five years, have lost around two thirds of their territory in the city over the past two weeks.

A rebel official denied they had entered but said the army and its allies were trying to enter and battles continued.

A military source said troops were "advancing in that direction".

The government now appears closer to victory in the city than at any point since 2012, the year after rebels took up arms to overthrow President Bashar al-Assad in a war that has killed hundreds of thousands of people, made more than half of Syrians homeless and created the world's worst refugee crisis.

The Syrian Foreign Ministry said it would now accept no truce in Aleppo, should any outside parties try to negotiate one. Russia and China vetoed a UN Security Council resolution on Monday calling for a week-long ceasefire. Moscow said rebels used such pauses in the past to reinforce.

Tens of thousands of civilians are still trapped in rebel-held districts of Aleppo, reduced to a few kilometres (miles) across. The United Nations, whose staff are restricted to government-controlled areas of the city, on Tuesday described "a very disastrous situation in eastern Aleppo".

"There has been heavy shelling on us, there are massacres (of civilians), there's no electricity and little internet access," said Abu Youssef, a resident of one of the areas still held by the fighters.

Damascus and Moscow have been calling on rebels to withdraw from the city, disarm and accept safe passage out, a procedure that has been carried out in other areas where rebels abandoned besieged territory in recent months. Moscow wants negotiations with Washington to facilitate such an evacuation.

But despite Lavrov's announcement of a meeting in Geneva, a US official said firm plans for talks had never been set, though Washington was still working to reopen negotiations.

“We’re not going to negotiate this publicly,” the official said on condition of anonymity.

Rebels have told US officials they will not withdraw, and said there had been no more formal contact with Washington on the topic since last week.

"The Americans asked if we wanted to leave or to stay ... we said this is our city, and we will defend it," Zakaria Malahifji, a Turkey-based official for the Fastaqim rebel group, told Reuters on Tuesday.

The Cold War-era super powers have backed opposing sides in the war, but Russia has intervened far more openly and decisively, joining Iran as well as Iraqi and Lebanese Shi'ite groups to back Assad.

Some of the groups fighting in eastern Aleppo have received support in a US-backed military aid programme to rebels deemed moderate by the West.

However, this has been minimal compared to massive Russian air support to aid Assad's government, which has turned the tide of the war in his favour over the past year.

The army said it had taken over areas to the east of the Old City including al-Shaar, Marja and Karm al-Qaterji, bringing them closer to cutting off another pocket of rebel control.

The Syrian Observatory for Human Rights said al-Shaar and some other areas had been taken, but did not immediately confirm the takeover of all the areas announced by the army.

A Turkey-based rebel official denied al-Shaar had been taken but said fighting continued in the neighbourhood.

Outside of Aleppo, the government and its allies are also putting severe pressure on remaining rebel redoubts.

The Observatory said a heavy Syrian and Russian aerial bombardment in the last three days in the mostly rebel-held Idlib province to the southwest had killed more than 100 people.

The rebels' loss of the eastern half of Aleppo, Syria's largest city before the war, would be the biggest victory of the conflict so far for Assad, securing his grip on all Syria's main cities.

It would also be a success for President Vladimir Putin who intervened to save Moscow's ally in September 2015 with air strikes, and for Shi'ite Iran, whose elite Islamic Republic Guard Corps has suffered casualties fighting for Assad.

UN official Jens Laerke said: "Winter is approaching, it's already getting very, very cold so that has come up as a priority need ... Food is running out, the little food that is available is being sold at extremely inflated prices."

While rebels have said they will not leave, one opposition official, who declined to be identified, conceded they may have no alternative for the sake of civilians who have been under siege for five months and faced relentless government assaults.

Insurgents, meanwhile, have fought back ferociously inside Aleppo. Some of the fighting took place on Monday within a kilometre (half a mile) of the ancient citadel, a large fortress built on a mound, and around the historic Old City.

With narrow alleyways, big mansions and covered markets, the ancient city of Aleppo became a UNESCO heritage site in 1986. Many historic buildings have been destroyed in the fighting.

Apart from their support for rebels fighting against Assad, Western countries are also taking part in a US-led air campaign against Islamic State, the Sunni Muslim militant group which broke away from other anti-Assad groups to proclaim a caliphate in territory in Syria and neighbouring Iraq.

Moscow says helping Assad is the best way to defeat Islamic State. Western countries say the group gains strength from the fury unleashed by Assad's military crackdown on his enemies.

France, a staunch backer of the anti-Assad opposition, will convene foreign ministers of like-minded countries in Paris on Saturday to try to come up with some form of strategy in the wake of the Aleppo onslaught, although few diplomats expect anything concrete to be achieved.

Western countries say that even if government forces take Aleppo, they will still not be able to end the conflict, as long as millions of Syrians see the government as a brutal enemy.

"Aleppo falls, but the war goes on," said one US official.