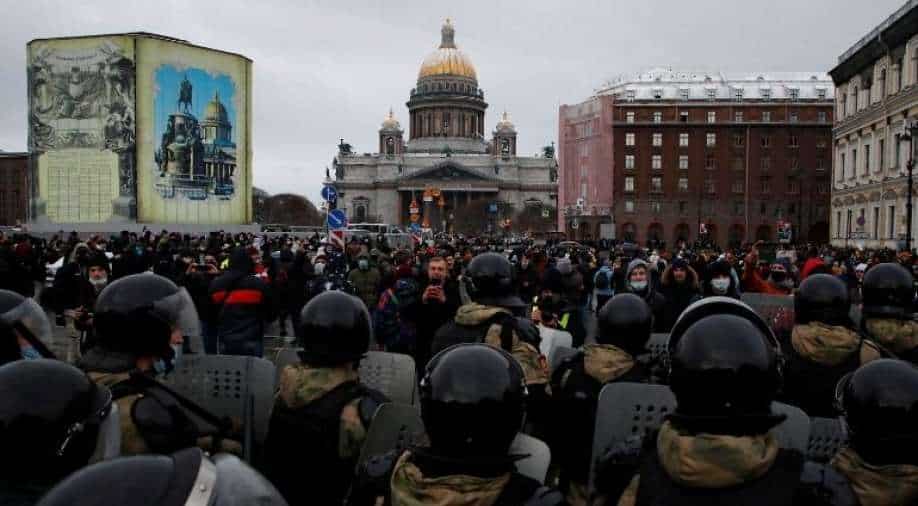 Demonstrators stand in front of law enforcement officers during a rally in support of jailed Russian opposition leader Alexei Navalny, as Saint Isaac?s Cathedral is seen in the background, in Saint Petersburg, Russia January 31, 2021 Photograph:( Reuters )

Russia on Monday said that a large number of people who participated in protests in support of jailed Kremlin critic Alexi Navalny on Sunday were "hooligans and provocateurs".

A Kremlin spokesperson told local media that dialogue with protesters would be impossible. "There can be no conversation with hooligans and provocateurs," Dmitry Peskov said.

On Sunday, supporters of Navalny had staged protests across the country. In Moscow, large crowds were seen in conflict with local police.

Navalny's foundation (FBK) said it had submitted a list of 35 people in total in a letter addressed to Biden with eight named on a ''priority shortlist''.

The letter said that seven of the 35 individuals are already on US sanctions lists.

US Secretary of State Antony Blinken on Twitter condemned "the persistent use of harsh tactics against peaceful protesters and journalists by Russian authorities for a second week straight".

The Russian foreign ministry hit back, accusing the United States of "gross interference" in its affairs and of using "online platforms controlled by Washington" to promote the protests.

EU foreign policy chief Josep Borrell also said he deplored the "widespread detentions and disproportionate use of force" against protesters and journalists.

"Russia needs to comply with its international commitments," he added in a tweet.