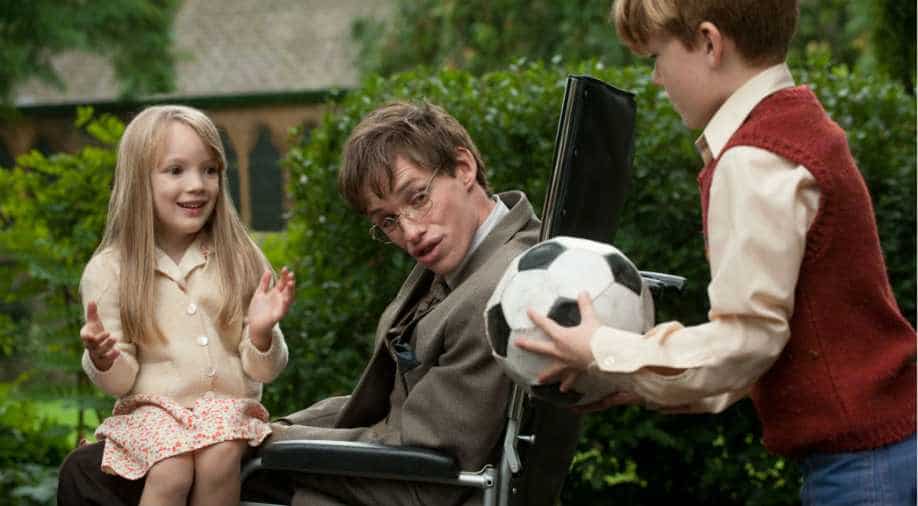 Eddie Redmayne in a still from Theory Of Everything Photograph:( Others )

He may have been a genius physicist, but Stephen Hawking's popularity transcended beyond science. The physicist, who died on Wednesday morning, at the age of 76 influenced and inspired generations of not such scientists but also filmmakers, musicians and even authors.

Most would remember Hawkings' biopic, The Theory Of Everything (2014) as a fitting tribute to his life and achievements. Interestingly Hawkings himself made appearances in TV shows, advertisements and even songs much before the film came into being.

Eddie Redmayne's stellar performance in The Theory Of Everything, as the scientist who was diagnosed with  amyotrophic lateral sclerosis (ALS), a form of motor neurone disease that attacks the nerves controlling voluntary movement at the age of 21, not only won the actor an Oscar that year, but it also highlighted Hawkings and his first wife Jane's love story and how the couple struggled to live a normal life amid the disease that slowly degenerated Hawkings ability to move and later even speak.

The film, considered one of Redmayne's best work till date, won critical acclaim and even got the nod of approval from the physicist himself.

Hawking's life and extraordinary work were documented in a 1991 documentary in the aptly titled  A Brief History Of Time. The film, by Errol Morris, was based on the book by the same name written by Hawkings and explained the fundamental theories of the universe

One of the most popular series of our times, The Big Bang Theory, often gave Hawking's references in the show. A show about a bunch of scientists (read geeks), it had Hawkings and his work as the fulcrum of the narrative. Hawkings himself, in fact, appeared in one of the episodes of the show - reviewing Jim Parsons’s character Sheldon’s paper on the Higgs boson.

Hawkings was a key character in one of The Simpson's episode called They Saved Lisa’s Brain which aired in 1999.  The episode helped him cement his cult status- complete with his personalised figurine- and he appeared in three other occasions on the popular series.

Hawkings was also seen Matt Groening’s animated hit, Futurama, and he even appeared as his own hologram in a 1993 episode of Star Trek: The Next Generation, playing poker with Einstein and Newton.

His 1988 book A Brief History of Time sought to explain to non-scientists the fundamental theories of the universe and it became an international bestseller, bringing him global acclaim.

It was followed in 2001 by The Universe in a Nutshell.

In 2007, Hawking published a children's book, George's Secret Key to the Universe, with his daughter, Lucy, seeking to explain the workings of the solar system, asteroids, his pet subject of black holes and other celestial bodies.