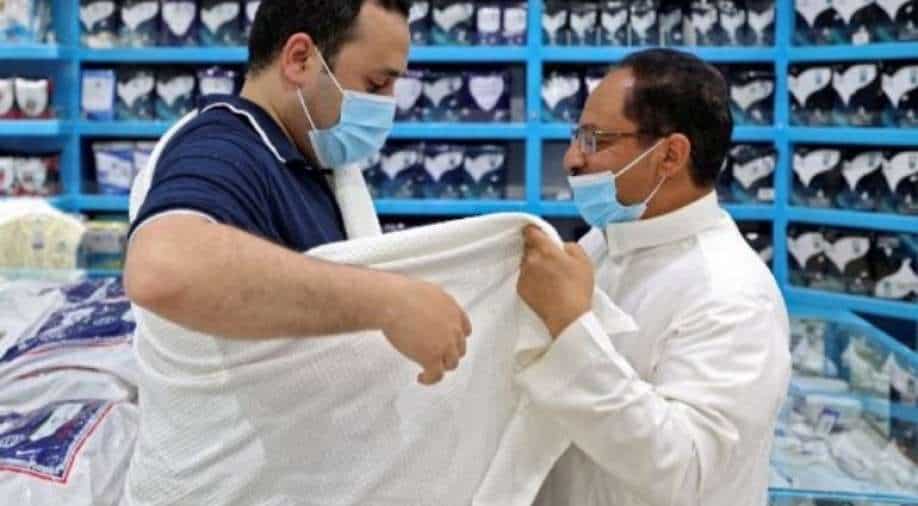 60,000 Saudi Arabian citizens will be allowed to participate, an increase over 2020, but still much lower than normal

Saudi Arabia will host another downsized hajj from Saturday, with only residents fully vaccinated against the coronavirus permitted and overseas Muslim pilgrims barred for a second year.

The kingdom seeks to repeat last year's success that saw no virus outbreak during the five-day Muslim ritual.

It is allowing 60,000 residents of Saudi Arabia to participate, higher than in 2020 but drastically lower than in normal times. People will begin to arrive on Saturday, a day before the start of rites.

In 2019, some 2.5 million Muslims from around the world participated in the annual hajj, a key pillar of Islam that is a must for able-bodied Muslims at least once in their lifetime.

Earlier this month, the hajj ministry said it was working on the "highest levels of health precautions" in light of the pandemic and the emergence of new variants.

Chosen from more than 558,000 applicants through an online vetting system, the event is confined to those who have been fully vaccinated and are aged 18-65 with no chronic illnesses, it said.

The pilgrimage, which typically packs large crowds into congested religious sites, is potentially a super-spreader of the virus.

Aside from strict social distancing measures, the ministry said it will introduce a "smart hajj card" to allow contact-free access to camps, hotels and buses to ferry pilgrims around religious sites.

The card system would also help track down any missing pilgrims, it added.

Authorities have deployed black-and-white robots to dispense bottles of sacred water from the Zamzam spring in Mecca's Grand Mosque, built around the Kaaba, the black cubic structure towards which Muslims around the world pray.

The revered Black Stone in the Kaaba, which it is customary but not mandatory to touch during the pilgrimage, is expected to be kept out of reach.

Saudi Arabia has so far recorded more than 503,000 coronavirus infections, including over 8,000 deaths.

More than 20 million vaccine doses against coronavirus have been administered in the country of over 34 million people.

The hajj went ahead last year on the smallest scale in modern history, with authorities initially saying only 1,000 pilgrims were allowed but local media said up to 10,000 took part.

No infections were reported as authorities set up multiple health facilities, mobile clinics and ambulances to cater for the pilgrims, who were taken to the religious sites in small batches.

They were also given amenity kits that included sterilised pebbles for the "stoning of Satan" ritual, disinfectants, masks, a prayer rug and ihram, the traditional seamless white hajj garment, made from a bacteria-resistant material.

Hosting the hajj is a matter of prestige for Saudi rulers, for whom the custodianship of Islam's holiest sites is their most powerful source of political legitimacy.

But barring overseas pilgrims has caused resentment and anguish among Muslims worldwide, who typically save for years to take part.

"But frustration is growing across the Muslim world that could raise questions about the kingdom’s role as the custodian of holy mosques and result in a reduction of its religious soft power.

"It also spells disaster for the hajj economy worldwide."

The hajj and year-round umrah pilgrimages are usually a key revenue earner for the kingdom, not to mention airlines and travel agencies.

In normal times, they together rake in some $12 billion (10.3 billion euros) annually, keeping the economy humming in Mecca.

But downsizing the rituals, which will run until Tuesday, the first day of post-Ramadan holidays, has hit government revenues and battered businesses that support hundreds of thousands of jobs in the holy city, from travel agents to street barbers and souvenir shops.

Mecca has seen a construction boom in recent years that added shopping malls, apartments and luxury hotels, some offering spectacular views of the sacred Kaaba.

But most premises have seen fewer customers since the pandemic.

"The Saudi government's confirmation that the hajj pilgrimage will be extremely limited this year will weigh on the kingdom's economic recovery," said Capital Economics, a research consultancy.

"The government is clearly concerned that a larger hajj could spark a surge in COVID-19 cases and possibly risk importing new virus variants, which could force them to tighten restrictions that harm the economy."