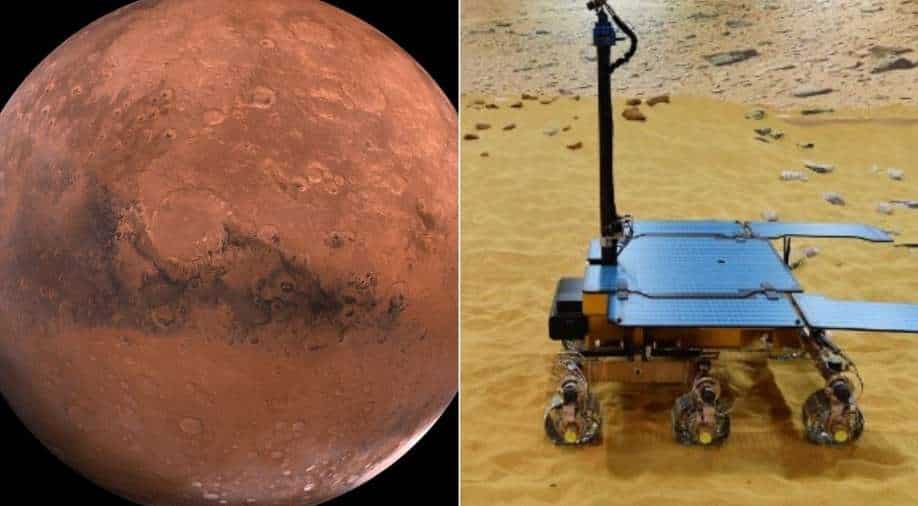 (left) A picture shows a working prototype of the newly named Rosalind Franklin ExoMars rover at the Airbus Defence and Space facility in Stevenage, north of London on February 7, 2019. Photograph:( Others )

The ESA also said it took note of the Russian space agency Roscosmos' decision over the weekend to suspend launches and withdraw its workers from Europe's spaceport in Kourou, French Guiana, over the EU sanctions

The invasion has impacted land, water and air with disruptions in airspace, sea and land routes in easter Europe, but now the crisis has affected a space programme.

A Russian-European joint mission to land a rover on Mars has been impacted as it is "very unlikely" to launch the ExoMars mission this year due to sanctions over Moscow.

The European Space Agency said that the launch of the Rosalind Franklin rover, whose mission is to drill into the Martian soil to seek out signs of life, was originally planned for 2020 but postponed due to coronavirus (COVID-19) and technical delays.

But in January, the ESA declared the ExoMars mission was ready to launch this September as Russia was ready to provide the launcher, descent module and landing platform.

Now, in a response to the Russian invasion, the European Union imposed massive sanctions on Moscow, the ESA said "the sanctions and the wider context make a launch in 2022 very unlikely".

"We are fully implementing sanctions imposed on Russia by our member states," the ESA said in a statement on Monday (February 28).

"We deplore the human casualties and tragic consequences of the war in Ukraine. We are giving absolute priority to taking proper decisions, not only for the sake of our workforce involved in the programmes, but in full respect of our European values," it added.

The ESA also said it took note of the Russian space agency Roscosmos' decision over the weekend to suspend launches and withdraw its workers from Europe's spaceport in Kourou, French Guiana, over the EU sanctions.

"Regarding the Soyuz launch campaign from Europe's Spaceport in Kourou, we take note of the Roscosmos decision to withdraw its workforce from Kourou," the statement added.

The space agency added that they will "consequently assess for each European institutional payload under our responsibility the appropriate launch service based notably on launch systems currently in operation and the upcoming Vega-C and Ariane 6 launchers."