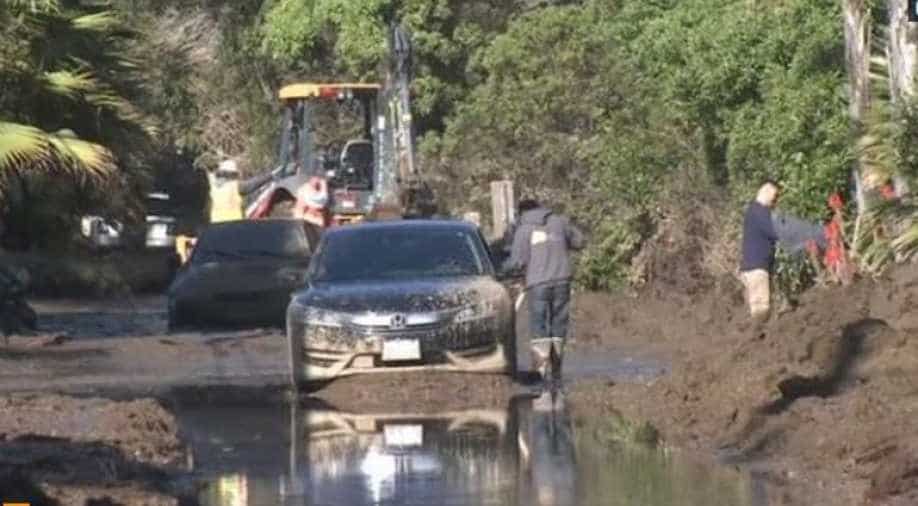 Heavy rains on Tuesday sent rivers of waist-high mud and debris flowing from the hills into Montecito and other towns in Santa Barbara County northwest of Los Angeles Photograph:( Reuters )

Rescuers used dogs and helicopters to search for victims on Wednesday of powerful mudslides which left at least 17 people dead in a southern California community that is also home to major celebrities including Oprah Winfrey.

Heavy rains on Tuesday sent rivers of waist-high mud and debris flowing from the hills into Montecito and other towns in Santa Barbara County northwest of Los Angeles, which are still recovering from last month's ferocious wildfires.

"We are saddened to report that the death toll has now risen to 17," Santa Barbara County Sheriff Bill Brown told reporters, saying it had been "another extremely challenging day."

The US Coast Guard released footage of a couple, their two young children and two dogs being plucked from their roof and hoisted up to a helicopter in baskets.

Yellow bulldozers were clearing the roads of tons of sticky brown mud in Montecito and other towns as utility workers restored downed power lines.

Talk show host Oprah Winfrey, who has been touted this week as a possible 2020 candidate for the White House, was among those affected by the mudslides.

Winfrey posted a video of herself outside her Montecito mansion wading through near-knee deep mud.

In some neighbourhoods still bearing the scars of the Thomas Fire, houses were completely destroyed while others nearby were untouched.

"Part of the problem with this is the fire created a situation where the dirt was able to wash down," said Richard Targonia, a resident of nearby Carpinteria.

"Had we still had all the vegetation on the hills it would not have been as much of an issue," Targonia said.

"I have lived here my whole life," said Melissa Ausanka- Crues, 29, a nurse. "My family has had a house here for 30 years and never seen something like this."

Talk show host Ellen DeGeneres was another Montecito resident impacted by the storm.

DeGeneres posted a picture on Twitter of herself standing in mud next to a downed tree near her home.

"This is the street in front of our house," she said. "I don't know anything about our house yet. I'm heartbroken for our community of Montecito.