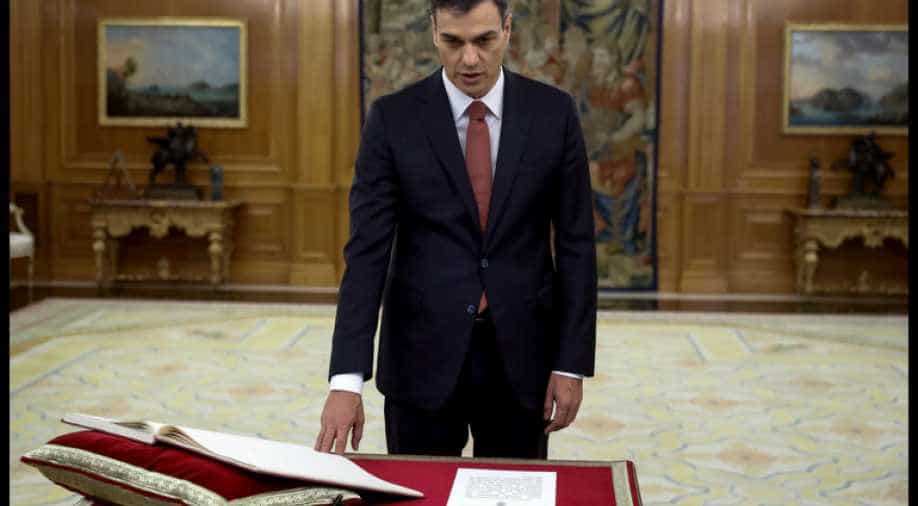 Tens of thousands of aggrieved opposition supporters called for fresh elections over what they consider the prime minister's mishandling of the territorial crisis in Catalonia.

Red and yellow Spanish flags daubed the front pages of the country's conservative newspapers on Sunday as the capital braced for what was billed to be the biggest challenge to Spain’s prime minister since he took office, as tens of thousands of aggrieved opposition supporters called for fresh elections over what they consider his mishandling of the territorial crisis in Catalonia.

By midday, the colours were even more ubiquitous as a sea of flag-waving protesters washed into Madrid's Plaza de Colón, home of the largest Spanish flag in the world, where civilians and politicians launched what felt like an unofficial election campaign against Pedro Sánchez, leader of the Socialist Party (PSOE).

"I'm here to ask for elections, the prime minister we have at the moment is only occupying himself with the one region (Catalonia) in order to stay in power," said 23-year-old nursing student Juan Antonio, who declined to give his surname.

Sánchez's decision to take a diplomatic route when dealing with the regional government in Catalonia lies at the heart of the discontent being vented at the downtown Madrid square.

To some, including opposition party leaders, his actions are considered tantamount to treason.

But for Juan Antonio, it was the electoral process – or lack thereof in his view – that presented a pressing concern.

"I am not some sort of radical, the only thing I want is for Pedro Sánchez to govern for all Spaniards," he said.

Sánchez came to power on the back of a no-confidence vote in June 2018 against his conservative predecessor Mariano Rajoy, of the Popular Party.

Although his ascent was conducted in accordance with Spain's Constitution, his opponents have singled the process out as reason enough for new elections in Spain.

He currently presides of a minority government that relies on smaller parties, including Catalan separatist outfits, to pass legislation.

The PP and the centre-right Ciudadanos organized the protest after Sánchez's government unveiled a proposal to appoint a mediator to facilitate dialogue with the regional Catalan leaders. Vox, an emergent far-right group, also signed up for the event.

"No more socialist surrender, no more pro-independence blackmail," Pablo Casado, the leader of the PP, told reporters gathered in a cordoned-off area near the vast monument to Christopher Columbus at the square, which is dedicated to the Italian explorer's exploits in the name of the crown of Castille.

"Today begins the reconquest of the hearts of Spaniards who have said: enough," added the leader of the opposition, who has previously flung accusations of high treason toward the PM for his approach to Catalonia. "We say enough is enough; call elections now," he said.

Albert Rivera, the leader of Ciudadanos – a party initially founded in the Catalonia region to campaign against separatist outfits – also gave an address with the same message at its heart.

"That's enough of separatists defining our journey and enough of the Spanish population forced to be at the service of those who want to liquidate this country," he said.

Parties on the Spanish right have found common cause in the Catalan crisis as all stand firmly against concessions or negotiations but the logistical affiliation linking the PP, Ciudadanos, and Vox, is insecure.

The leaders of the more mainstream outfits were careful not to share a podium with the ultra-nationalist Vox, whose leader Santiago Abascal, also spoke at the demonstration.

Although a small party, Vox has gained media attention for its controversial views on women's rights and immigration.

All of the main political figures at the event did, however, strike a pose together for a group photograph.

Vox acted as kingmaker when it broke onto Spain's political stage in the regional Andalusian elections late last year. The PP now governs the populous region with the backing of Ciudadanos and Vox following an agreement that brought an end to 40-years of socialist rule there.

Socialist Party officials were quick to downplay the magnitude of the demonstration.

PSOE’s deputy secretary general, Adriana Lastra, shared a graph on her Twitter page which allegedly showed the declining number of attendants at conservative-backed protests of the years.

"Spain has turned its back on the far right," she said.

Center-left and left-wing politicians highlighted that the Gay Pride parade in 2018 and International Women's Day had drawn bigger crowds.

Speaking from the northern city of Santander, where he was attending an event, Sánchez said that he respected the demonstration but defended his government's actions.

"What I'm doing now as prime minister is resolving the national crisis that the PP aggravated when it was in government," he said.

The left-wing Podemos party was more stinging in its criticism of the demonstration's organizers.

"I am sure that many of those protesting in Plaza de Colón today love Spain, the problem is that the organizers don't," said Pablo Echenique, head of party organization, said. "The organizers live off promoting hate between Spanish people," he added.

The demonstration came just days before 12 jailed Catalan separatist politicians and activists, including former ministers and the former regional vice-president, are due to go on trial at the Supreme Court.

Here they could face charges of rebellion, sedition and misuse of public funds for their alleged role in an illegal independence referendum that in Oct. 2017 brought the country to the brink of a constitutional crisis.

The Catalan crisis, which had been simmering for years, exploded in 2017 with the events that led up to the Oct. 1 referendum on the prosperous region's secession from the rest of the country, which was deemed unconstitutional by the judiciary.

Several weeks later, the regional government unilaterally declared independence and Spain triggered a constitutional mechanism, Article 155, to strip the region of its autonomy, depose the local government and dissolve parliament.

Fresh elections saw the pro-independence parties again eke out a slim majority in the regional parliament, thus assuring a continuation of the territorial conflict between Barcelona and Madrid.

While the Socialist Party opposes Catalan independence, Sánchez only rose to power thanks to the votes of the Catalan European Democratic Party (PDeCat) and the Republican Left of Catalonia (ERC) party, whose lawmakers backed him in the successful no-confidence vote against Rajoy.

The Spanish government now desperately needs those same votes from ERC and PDeCAT, who now jointly govern Catalonia, in order to pass an ambitious budget bill that would be doomed without the Catalan nationalists' support.

Both Rivera Casado have urged the government to re-apply Article 155 of the Constitution on Catalonia.