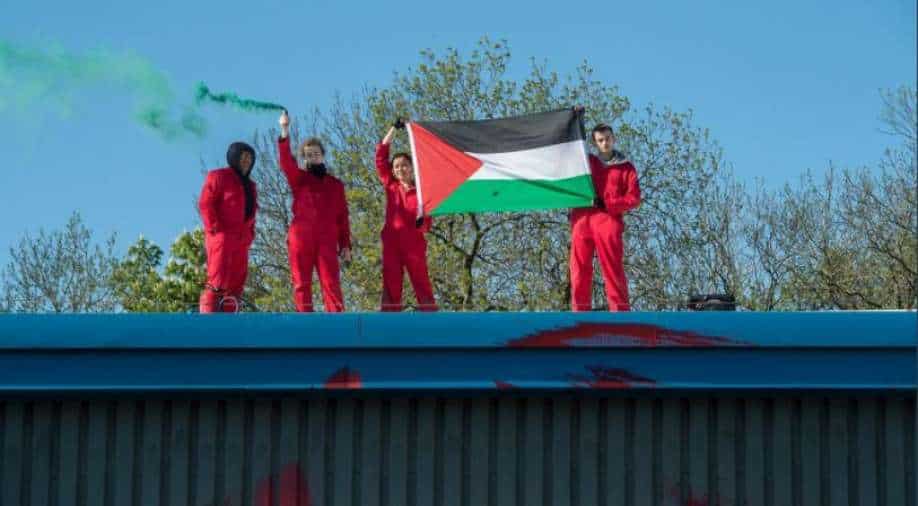 Pro-Palestine protesters have occupied a drone factory in Leicester in attempts to 'disrupt the production of arms and military technology.

A group from Palestine Action on Wednesday chained the gates shut and scaled the roof of the UAV Tactical Systems factory in the Meridian Business Park in Braunstone Town of Leicestershire.

A viral photo of four activists on the roof of the factory wearing red overalls and waving the Palestinian flag can be seen all over on social media.

The factory manufactures unmanned aerial vehicles that the protesters allege have been used in the conflict between Israel Army and Hamas militants in Gaza.

Palestine Action, which is made up of groups and activists across the UK, have made it their mission to take direct action against Elbit Systems' UK locations including those in Greater Manchester and Staffordshire.

This is the first time the group have struck at the Leicester site.

Meanwhile, a ceasefire between Israel and Hamas could come "as early as Friday", the Wall Street Journal reported, citing some US and foreign officials involved in the discussions.

As per the report, Egypt has made some headway in the negotiations with Hamas' leadership, while Israel conceded that it is nearing completion of its "objectives".

The report said that the mechanism of the ceasefire is in place, only timing is the issue. However, the members of Palestinian Islamic Jihad, another Gaza-based armed group, remained a wild card.

Rallies in support of Palestine have popped up globally, with several events scheduled in the US, Canada, the United Kingdom and Europe.

Israel and Palestine have exchanged several rocket fires, resulting in hundreds of injuries and deaths on both sides.