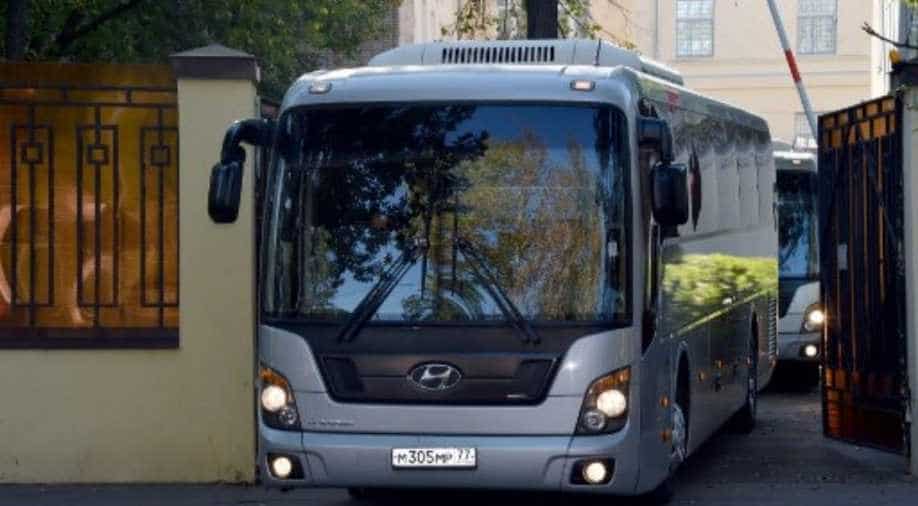 On Thursday, Russian President Vladimir Putin said for the first time the "large-scale" prisoner exchange with Ukraine was being finalised.

A long-awaited exchange of prisoners between Moscow and Kiev has begun, Russian state television reported on Saturday, broadcasting footage of buses leaving a jail in the capital.

"Buses have left the Lefortovo jail within the framework of preparations for a prisoner exchange," the Rossiya 24 news channel said.

AFP journalists at the scene saw two buses with tinted windows leaving the high-security prison in Moscow under a police convoy.

The channel said the buses had arrived at Moscow's Vnukovo airport, where there is a terminal for government flights.

On Thursday, Russian President Vladimir Putin said the "large-scale" prisoner exchange with Ukraine was being finalised.

The Russian leader said the swap would be "a huge step towards normalising relations" with Kiev.

It would be the first major exchange of prisoners between Ukraine and Russia since the conflict over eastern Ukraine broke out in 2014.

Ukrainian President Volodymyr Zelensky raised the prospect of a prisoner swap after the comedian-turned-politician swept to power in May.

His election has revived peace efforts, with the leaders of Russia, Ukraine, Germany and France expected to meet this month for talks.

Last week media reports said the prisoner exchange was imminent and some Ukrainian prisoners had been moved to Moscow from their jails.

The apparent preparations then stalled.

It is unclear who will be part of the swap and Moscow has been tight-lipped.

But reports have suggested up to 35 prisoners on both sides could be exchanged.

The head of the defence team for 24 Ukrainian sailors captured by Russia last year said they would be part of the exchange.

"According to my information, they were put on a bus. All 24 of them," Nikolai Polozov told AFP, adding that he expected them to arrive in Ukraine "in the next few hours".

Russia has been holding the sailors since seizing three vessels last November in the most dangerous direct clash between Russia and Ukraine in years.

Among those who could be released by Russia could be film director and activist Oleg Sentsov, 43, who has become Ukraine's most famous political prisoner.

He was arrested in 2014 and has been serving a 20-year sentence in a Russian Arctic penal colony for planning "terrorist attacks" in Moscow-annexed Crimea.

Reports emerged last week that Sentsov had been moved to Moscow.

Ukraine could hand over Kyrylo Vyshynsky, a journalist at Russia's RIA Novosti state news agency who was released on bail late last month pending a trial for "high treason".

A Ukrainian court this week also released from detention a man investigators have described as a key witness in the downing of flight MH17.

The release of Vladimir Tsemakh, an alleged air defence specialist for pro-Russian separatists, prompted concern from the Netherlands that he may avoid questioning.