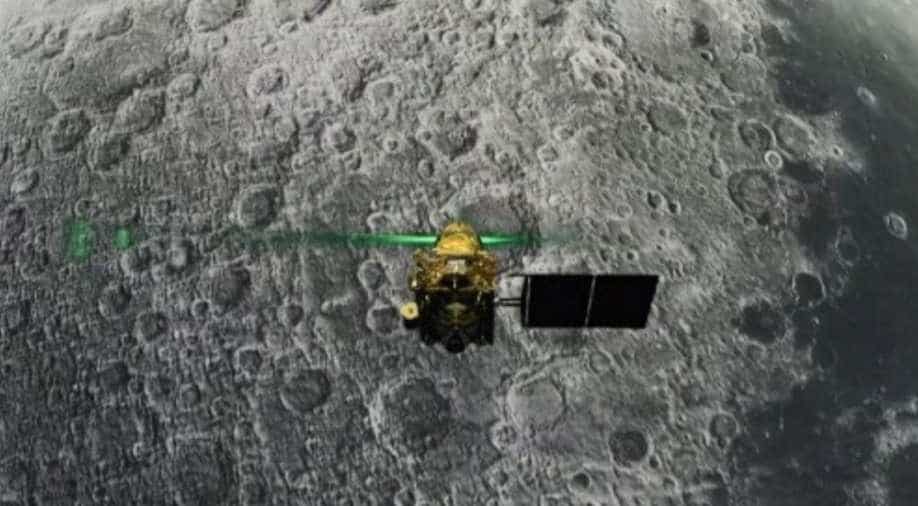 NASA'S Lunar Reconnaissance Orbiter (LRO) flew over Vikram's landing site on September 17. Another attempt will be made to spot the lander on October 14.

The National Aeronautics and Space Administration (NASA) on Friday, tweeted out images of the "targeted landing site of India’s Chandrayaan-2 lander Vikram" and stated that the lander had a "hard landing". The "precise location of the spacecraft in the lunar highlands has yet to be determined," NASA said in a statement.

NASA's statement further added that the lander may have been obscured by shadows as it "was dusk when the landing area was imaged and thus large shadows covered much of the terrain".

NASA'S Lunar Reconnaissance Orbiter (LRO) flew over Vikram's landing site on September 17. Another attempt will be made to spot the lander on October 14.

India lost contact with the spacecraft it was trying to land on the moon in a setback for the nation's plans to become the first country to probe the unexplored lunar south pole.

Our @LRO_NASA mission imaged the targeted landing site of India’s Chandrayaan-2 lander, Vikram. The images were taken at dusk, and the team was not able to locate the lander. More images will be taken in October during a flyby in favorable lighting. More: https://t.co/1bMVGRKslp pic.twitter.com/kqTp3GkwuM

The lander of the Chandrayaan-2 moon mission was attempting a "soft," or controlled, landing near the south pole of the moon where scientists believe there could be water ice. Communication was lost just as it was about to touch down.

In any case, hopes of contacting the Vikram lander have waned since the September 6 landing attempt. Officials from the Indian Space Research Organization (ISRO) said imagery from the country’s Chandrayaan 2 orbiter, which launched in tandem with the Vikram lander, had located the landing craft on the moon.

Meanwhile, the Indian Space and Research Organisation (ISRO) has been trying to re-establish contact with the lander since the landing attempt. Data immediately before losing contact suggests that Vikram was descending at high speed, making it very hard to decipher if the lander is intact. The hopes of re-establishing contact are even lesser now, as the lander was designed for a two-week mission.

However, the lander and the rover were only a part of the moon mission and Chandrayaan 2's orbiter was still orbiting the moon and will collect and send back valuable data for one year.

Only the United States, Russia, and China have landed on the moon. Beijing's Chang'e-4 probe touched down on the far side this year, while Israel made an unsuccessful attempt to land its Beresheet spacecraft on the moon in April.