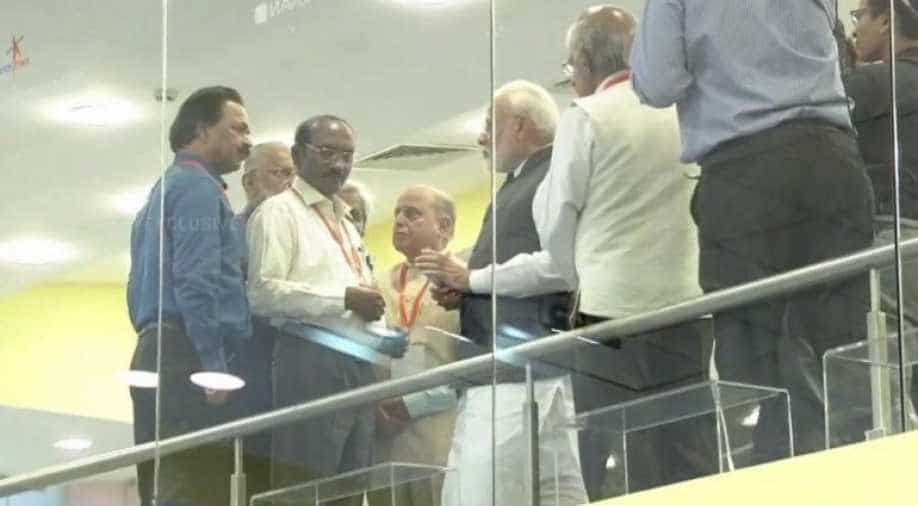 ISRO Chief K Sivan has briefed Prime Minister Narendra Modi about the status of the landing of Vikram Lander on the south pole of the moon. Photograph:( ANI )

Communication with India`s moon lander Vikram has been lost as it was descending towards the Moon early on Saturday, ISRO Chairman K. Sivan said.

The communication with Vikram lander was lost moments before its planned landing on the far side of the lunar surface.

In its last tweet at 1:49 am, ISRO which was giving updates about the missions announced, "Rough breaking of #VikramLander ends and Fine braking phase starts. #Chandrayaan2 #ISRO." The Vikram Lander successfully separated from Chandrayaan-2 Orbiter on September 2.

This is Mission Control Centre. #VikramLander descent was as planned and normal performance was observed up to an altitude of 2.1 km. Subsequently, communication from Lander to the ground stations was lost. Data is being analyzed.#ISRO

The Vikram lander was planned to land on the far side of the moon between 1:30 am to 2:30 am on the intervening night of Friday-Saturday. This would have been followed by rover (Pragyan) roll-out between 5:30 am to 6:30 am.

After revolving around the Earth`s orbit for nearly 23 days, the craft began its journey to the moon on August 14. The mission took off from the Satish Dhawan Space Centre in Sriharikota on July 22. India's second mission to the moon was approved by the cabinet in September 2008, just before the launch of Chandrayaan 1.