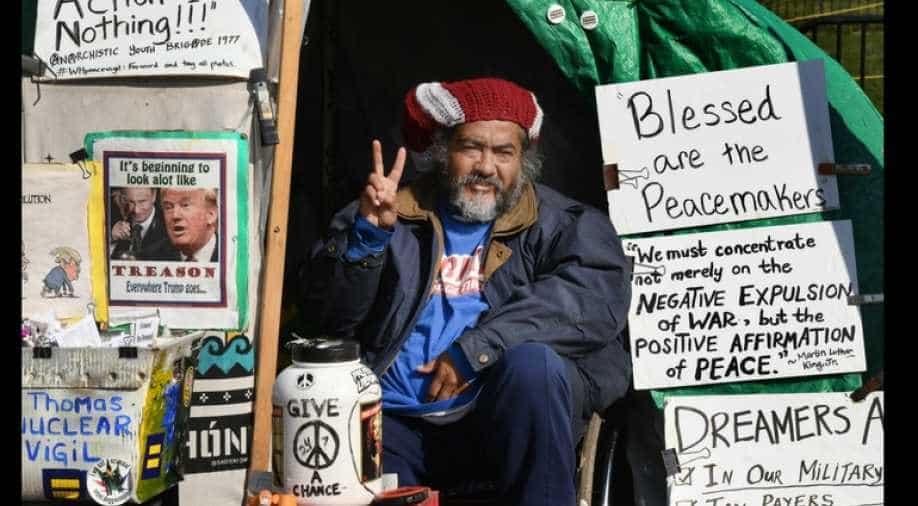 Philipos Melaku-Bello sits in the opening of the vigil's white plastic tent on Pennsylavania Avenue in front of the White House. Photograph:( AFP )

Thirty-seven years and five presidents later, Melaku-Bello is still there, quietly delivering his message from a tarpaulin-covered shelter plastered with signs advocating for peace, against the nuclear industry, and in support of human rights.

He says the site is a living demonstration of America's right to freedom of expression, guaranteed by a Constitution which the activist says is being tested under Donald Trump, a president he describes as "unlike any other."

"Our federal judges, not only the Supreme Court, have tried to keep Donald Trump in check but I tell you, he has them working very hard," Melaku-Bello says, referring to the numerous court challenges faced by Trump -- on everything from immigration to birth control to potential conflicts of interest.

Opposite the front lawn of the president's home, Melaku-Bello greets passersby with a gentle manner.

Hour after hour, local residents and tourists stop to chat or to snap photographs of the orderly protest site where he sits behind a box of pamphlets about uranium and nuclear weapons, drone warfare, and the Israeli-Palestinian conflict.

Some drop donations into a plastic container which says "Free Leonard Peltier," a member of the American Indian Movement jailed for the 1975 killings of two FBI agents, and whom most people will have long forgotten.

He speaks articulately, knowledgeably -- and at length -- about Peltier's case and a range of other domestic and global political issues.

They call this 'democracy'?

Melaku-Bello dismisses suggestions he himself has become an attraction.

"I'd always want it to be the message more than me," he says, flanked by signs, large and small.

"Make a peace treaty with North Korea," demands another, dwarfed by the biggest placard that calls for "wisdom and honesty."

Other signs address topical issues including the fate of hundreds of thousands of "Dreamers," immigrants brought to the country illegally as children whose protections Trump has vowed to end.

A California native in his mid-50s, who describes his personal politics as anarchistic, Melaku-Bello began protesting in the 1970s.

He belonged to a punk rock band which was touring the Washington area when he first came into contact with the protest site and "helped out."

The vigil was founded earlier that year by activist William Thomas, joined by Concepcion Picciotto who remained until her death in 2016. Thomas died in 2009.

For the first decade of his involvement, Melaku-Bello says he split his time between protesting and working for Amha Selassie, the exiled son of late Ethiopian emperor Haile Selassie.

In the course of that work, which involved preparing human rights reports, Melaku-Bello recounts being wounded by a landmine blast in Ramallah in 1987, leaving him in a wheelchair.

For the past seven years, the protest site has been his life, taking 90 to 100 hours a week.

Melaku-Bello, who tucks his hair up Rasta-style in a red and white toque above his untrimmed sideburns and graying beard, has reliable support from only two other activists, Neil Cousins and Craig Thompson, who rotate shifts with him.

On the pedestrian mall in front of the White House, activists for various causes come and go but the peace vigil remains, unique because it is manned day and night, a right Melaku-Bello says has been won through court fights.

"How dare they call this a democracy when it's not government for the people by the people but by an oligarchy government controlled by the few," he says, complaining that the wealthy are able to buy political influence in the United States.

His devotion earns praise even from those who disagree with him, such as passerby Eric Meek, 47, an Ohio school teacher who describes himself as "more right wing."

"I think that's what makes our country great," Meek says, "if two people who have different philosophies can talk in a sensible way" and listen to each other.

Melaku-Bello says he will keep talking, and listening, as long as he physically can.

"Maybe loving all the civilians of the planet, some people would call it madness," he says. "So how long will I do it? Maybe till my last breath."