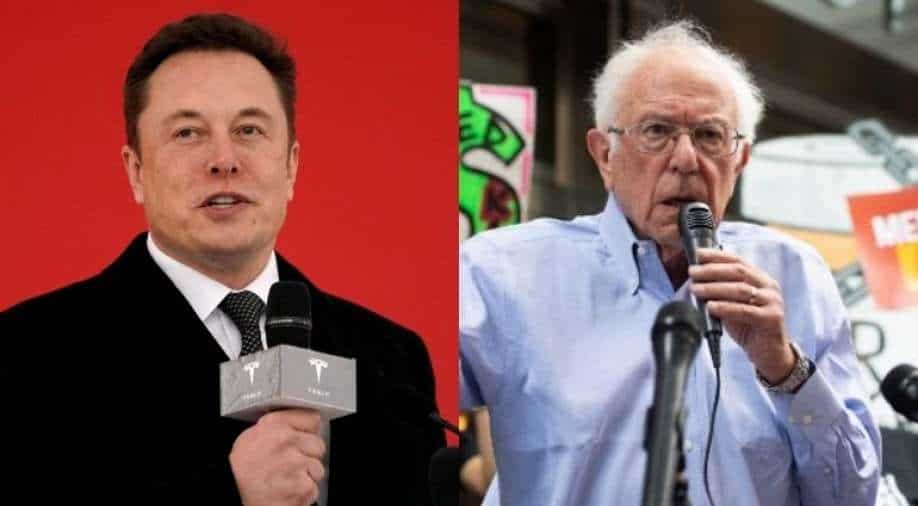 Taking another poke at Senator Sanders, Musk then tweeted, 'Want me to sell more stock, Bernie? Just say the word'

On Sunday, Tesla Inc Chief Executive Elon Musk and US Senator Bernie Sanders got into a spat after Sanders demanded that the wealthy pay their "fair share" of taxes.

We must demand that the extremely wealthy pay their fair share. Period.

Musk responded by taking a dig at the 80-year-old senator and saying, "I keep forgetting you're still alive."

Sanders and Musk have sparred previously too, with the Senator telling Musk to "focus on Earth" instead of using his wealth to travel to other planets.

As of Nov. 12, the billionaire CEO had already offloaded shares worth a combined $6.9 billion in the electric car company.

Taking another poke at Senator Sanders, Musk then tweeted, "Want me to sell more stock, Bernie? Just say the word."

The tweet by Sanders comes amid efforts in Washington to raise taxes on the ultra-wealthy.

Senate Democrats have proposed taxing billionaires' stocks and other tradeable assets in order to finance President Biden's social spending agenda and to close a loophole that allows these super-rich individuals to defer capital gains taxes indefinitely.

On Twitter a week ago, Musk said he would sell 10 per cent of his shares if social media users endorsed the move. He had said that he would “abide by the results of this poll, whichever way it goes.”

After about 57.9 per cent of people voted in support of the stock sale, staying true to his promise Musk sold 930,000 shares of his company stock, which amounted to over $1.1 billion.

Following this Musk once again sold 1.2 million shares held by his trust for over $1.2 billion on November 12.

Watch | Elon Musk is willing to spend $6 billion to fight world hunger, but with a plan