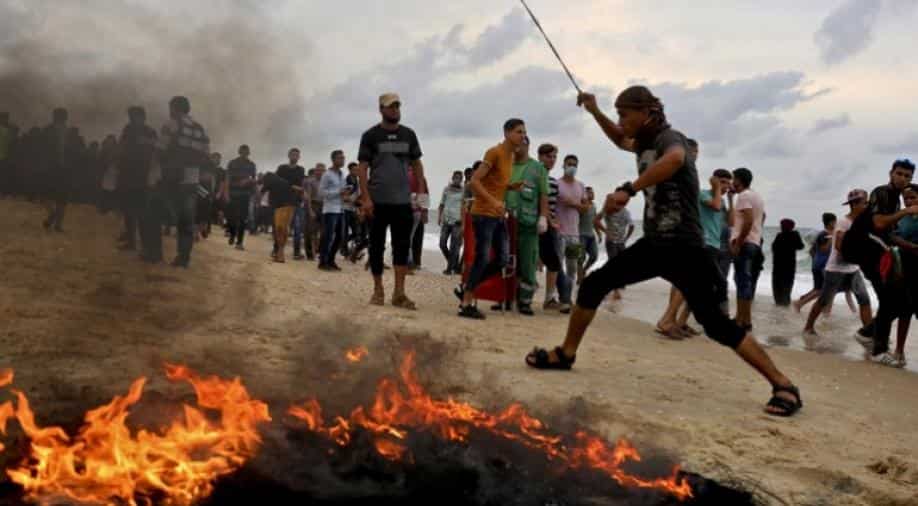 It's nearly 10:00 pm when young Palestinian men begin banging drums and chanting songs, while others attach incendiary devices to balloons -- all closely watched by Israeli snipers on the border.

For six months, Palestinians have gathered regularly along the fence between the Gaza Strip and Israel for often violent daylight demonstrations against Israeli policies.

But in recent weeks they have deployed a new tactic: "night confusion units".

Protests can go on until the early hours.

Organisers say they aim to force the Jewish state to ease its crippling decade-long blockade of Gaza, but residents in nearby Israeli communities say their lives are being destroyed.

Hamas says it backs the demonstrations but is not commanding them and that the idea for nocturnal activity came from protesters themselves.

"Every day the young men on the border invent ways to develop marches and the most recent was the night confusion unit," Hamas spokesman Hazem Qassem said.

An Israeli military official, who did not want to be named, said the night protests do not pose a new challenge.

"Our soldiers, including our snipers, have night vision equipment," he said.

"There are a few dozen, sometimes a few hundred demonstrators (at night)... they burn tyres, throw incendiary bottles and sometimes grenades and do not represent a more important threat than the daytime demonstrations."

The night protests come amid a resurgence in border demonstrations following a brief lull as Egypt and UN officials pursued a long-term truce between Hamas and Israel.

Those talks have stalled, along with efforts to reconcile Hamas and Palestinian president Mahmud Abbas' rival Fatah group.

As a result, there have been renewed warnings of yet another conflict between Hamas and Israel, who have fought three wars since 2008.

In a tent slightly further into the strip, young men inflated dozens of white balloons inscribed with "I love you".

They then attached flaming devices to the balloons, and launched them towards Israeli territory.

Others hurled primitively built sound grenades; the booms resonated across the border.

"We will not stop launching incendiary balloons until we break the siege on Gaza," said Abu Anas, one of the orchestrators of the night's activities.

Anas insisted the movement was independent of Hamas.

"The goal is to confuse the occupation and send our message to the settlers nearby that there is no sleep until we achieve our demands of lifting the siege and returning to our country," he said.

Rony Kissin, spokeswoman for the Israeli community of Kerem Shalom located next to the Gaza border, called the night protests a "nightmare".

"The children are very afraid of it. It's very dangerous. It is really like a weapon."

The border protests since March 30 have been labelled the "Great March of Return" because they call for Palestinian refugees to return to their former homes inside what is now Israel.

More than 700,000 Palestinians fled or were expelled in the 1948 war surrounding Israel's creation.

At least 194 Palestinians in Gaza have been killed by Israeli fire since the protests began. One Israeli soldier has been killed in the border area over the same period.

Israel says its actions are necessary to defend the border and stop infiltrations and attacks, which it accuses Hamas of orchestrating.

It also points to the hundreds of thousands of dollars in damage caused to Israeli farmland by the kites and balloons.

But Israel's use of live fire during the protests and clashes has drawn international concern.

Palestinians and rights groups say demonstrators have been shot while posing no real threat.

Just before midnight in one recent protest, dozens of youths approached the fence in an attempt to breach it.

One of the youngsters collapsed to the ground.

Medics treated the 17-year-old, who was shot in the foot.

Mohammed abu Aqaleen, another 17-year-old who said he was shot three months ago and walks with crutches, vowed the demonstrators would "continue to confuse the enemy with sound grenades and horns".

"This confusion will bring us back to Jaffa," said Aqaleen.