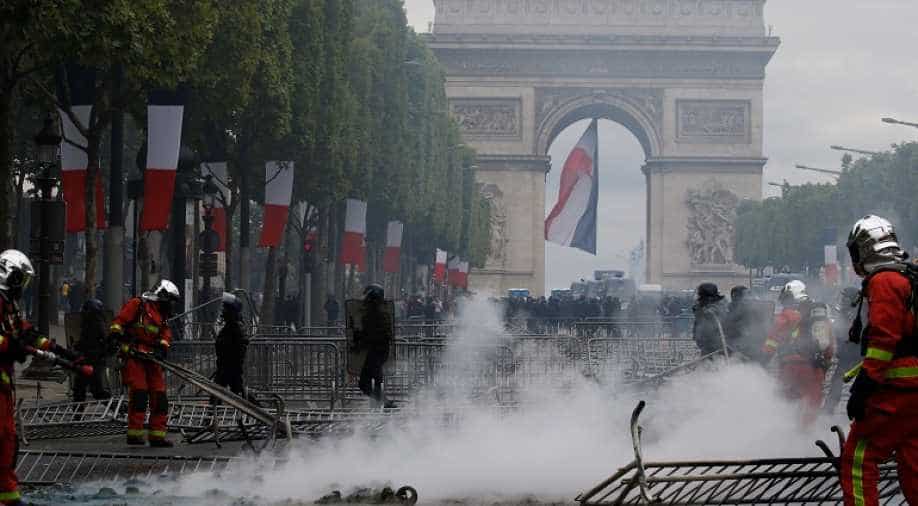 French firefighters extinguish a fire on the Champs Elysees avenue near the Arc de Triomphe during clashes with protesters after the traditional Bastille Day military parade in Paris, France, July 14, 2019. Photograph:( Reuters )

The famous boulevard was reopened to traffic as soon as the parade finished, but a few hundred protesters from the grassroots 'yellow vests' movement tried to occupy it.

The famous boulevard was reopened to traffic as soon as the parade finished, but a few hundred protesters from the grassroots 'yellow vests' movement tried to occupy it.

Macron and his guests had already left for the Elysees presidential palace for lunch.

Police fired tear gas to disperse the protesters, some hooded, who were trying to block the road with metal barricades, dustbins and other debris.

Several loud bangs were heard. Protesters hurled objects at the police, booed and set bins on fire. Police drove some of the demonstrators to adjacent streets where they regrouped and set up new barricades, drawing more tear gas fire.

A video obtained by Reuters showed a man kicking a policeman to the ground from behind and punching him after the policeman had used pepper spray to push back a couple. The policeman and his colleagues fought back with truncheons.

The Police Prefecture said on Twitter it had ordered the protesters to leave the area, or be forcibly removed.

Paris Police chief Didier Lallement told journalists during a Sunday evening patrol of the boulevard that order had been restored. He said some 200 rioters had tried to occupy the Champs Elysees but had been pushed out.

More trouble could be expected on Sunday night when the traditional Bastille Day fireworks is held, Lallement said, while seeking to reassure tourists they would be safe.

Authorities are also bracing for rowdy soccer fans to flood the avenue after Algeria's African Cup of Nations semi-final match against Nigeria. On Thursday, some fans looted shops there after Algeria beat Ivory Coast in the quarter-final.

Paris authorities had banned 'yellow vest' demonstrations near the parade but several groups linked to the movement had called for gatherings around the Champs Elysees on Bastille Day, a national holiday in France.

Earlier a French police source and a court source said 152 people -- whom they linked to the 'yellow vests' -- had been detained near the Champs Elysees as they tried to stage a protest.

The number of 'yellow vest' protesters has dwindled to a few hundred recently from a high of around 300,000 nationwide in November when demonstrations started against fuel price hikes and later morphed into a general discontent against Macron's policies and government.