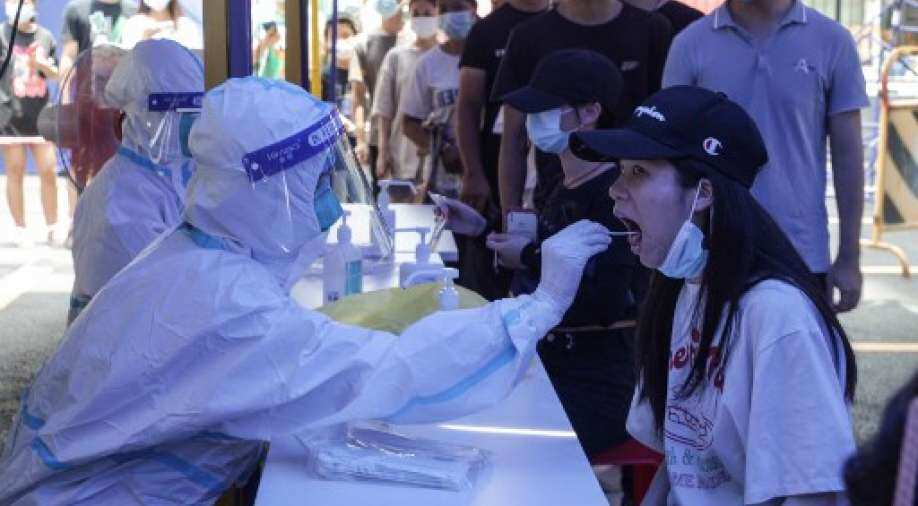 Authorities have blamed the delta variant, which has caused widespread loss of life in India

China has followed variations of that formula for dealing with the coronavirus for more than a year, and a new outbreak suggests that they could be part of Chinese life for some time to come.

China appeared to get the coronavirus under control nearly a year ago. But hundreds of millions of Chinese people remain unvaccinated. New variants of the coronavirus have appeared, and questions remain about whether China’s self-made vaccines can stop them.

The latest cases have been found in Guangzhou, capital of the southern province of Guangdong. Authorities have blamed the delta variant, which has caused widespread loss of life in India.

The city tested practically its entire population of 18.7 million between Sunday and Tuesday, some of them for the second time. It has also put neighborhoods with a total of more than 180,000 residents into total lockdown, with practically no one allowed out except to go to medical testing.

The early infections appear to have jumped from person to person at a cluster of eateries. Each infected person has infected more other people than in any previous outbreak that China has confronted, Zhang Zhoubin, deputy director of the Guangzhou Center for Disease Control, said at a news conference.

“The epidemic faced by Guangzhou this time is an unprecedented opponent, and it requires more resolute and decisive measures to deal with it,” he said.

Test facilities in Guangzhou have been operating around the clock. Lines are long. Residents wake early to try to beat the rush but still find delays.

China’s approach has evolved since the coronavirus first emerged, when Beijing initially put harsh restrictions on hundreds of millions of people. Today its lockdowns are focused on neighborhoods rather than cities or provinces. China has made vaccination the centerpiece of its strategy.

Still, many of the core tenets remain for a huge and densely populated country: vast testing, strict limits on movement and intense scrutiny of arrivals from other countries.

Foreign businesses have worried that those limits on international travelers could snarl their plans. A European Union Chamber of Commerce survey released this week found that three-quarters of member companies said they had been adversely affected by travel restrictions, usually by hindering them from bringing in key engineers or executives.

Beijing has demanded that travelers from dozens of countries spend two weeks in employer-supervised quarantine even before flying to China. Once there, travelers must spend at least two weeks and sometimes three or longer in government-supervised quarantine, even if they are fully vaccinated. Rounds of tests can turn up a possibly false positive, leading to more tests and additional days or weeks in isolation.

Many foreigners in China face a choice: If they leave to visit spouses, children and other family members elsewhere, they may be unable to reenter the country later because of the pandemic restrictions.

“There is absolutely a growing fatigue for a lot of the foreigners who are here,” said Jacob Gunter, senior policy and communications manager at the EU Chamber of Commerce in China.

At home, China’s leaders are pushing its people to get vaccinated. It has administered about 800 million doses by the government’s count, compared with 300 million administered in the United States. Yin Weidong, chair and CEO of Sinovac Biotech, one of China’s main vaccine manufacturers, told state television Friday that Chinese regulators had approved the emergency use of vaccines in children as young as 3.

Still, administering 800 million doses, almost all of the vaccines require two shots, means most of China’s 1.4 billion people have not been fully vaccinated. Some people remain hesitant to get the shots, and Chinese media outlets have used the Guangzhou outbreak to encourage skeptics to get inoculated.

The spread of the virus has raised fresh questions about the effectiveness of China’s vaccines, particularly against variants. The Seychelles last month and now Mongolia in the past three weeks have both had large numbers of infections despite high vaccination rates. Both have used the Sinopharm vaccine from China, although the Seychelles also relied partly on AstraZeneca vaccines.

The delta variant now circulating in Guangzhou has also shown the ability in other countries to infect some people who had already been vaccinated, a phenomenon known as vaccine escape. Research elsewhere has found that to be a particular problem for people who have received only a first injection of a two-jab vaccine and are then exposed to the delta variant.

Researchers in Britain have found that receiving only the first of two shots of the Oxford-AstraZeneca or Pfizer-BioNTech vaccines may be only 30 per cent effective in preventing infection with the delta variant, said Raina MacIntyre, who heads the biosecurity program at the Kirby Institute of the University of New South Wales in Sydney.

“With the degree of vaccine escape there is with the delta variant, you really do need people to be fully vaccinated,” she said.

Yin told China’s state-run television network Saturday that a third shot of his company’s vaccine produces a tenfold increase in antibodies within a week. But Chinese vaccine manufacturers are not yet recommending a third dose.

“As far as China is concerned, in fact, completing the two-shot immunization is the most important task for all the public,” he said.

In the meantime, Guangzhou has tried to turn its virus setback into a showcase for local technologies. Officials there said they had used 31 driverless shuttle vans and trucks to send food and other critical supplies into locked-down neighborhoods to avoid exposing delivery personnel.

By Tuesday, Guangdong province had 157 people in the hospital with the virus and was announcing about 10 new cases per day. The province and also Guangzhou itself have banned anyone since last weekend from leaving unless they have a valid reason and a negative nucleic acid test for the virus within the preceding 48 hours.

Unlike many places around the world, Guangzhou at least does not have to worry about running out of pandemic supplies: It is coincidentally a hub for manufacturing and exporting them. Chen Jianhua, chief economist of the Guangzhou Bureau of Industry and Information Technology, said at a news conference Wednesday that the city’s daily production capacity was 91 million masks and 7 million sets of coronavirus detection chemicals.