Chile's response to Pinera's reforms: A strike and more protests 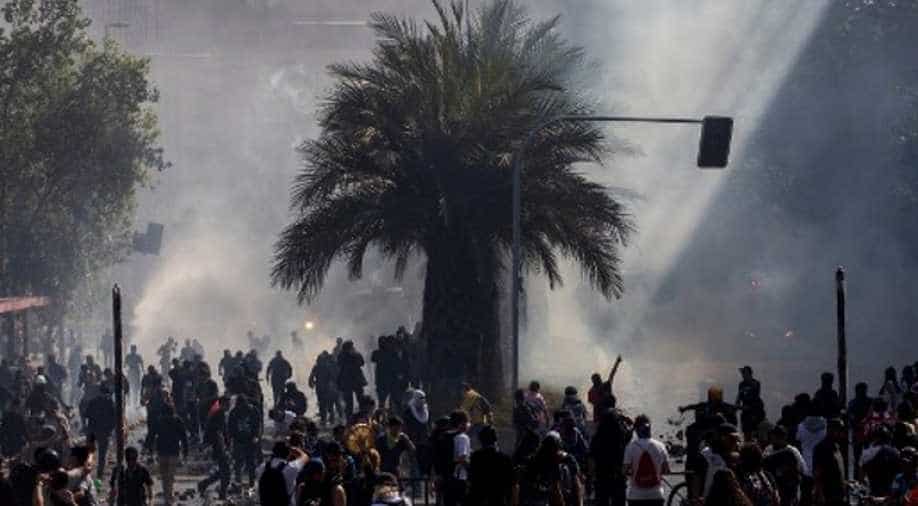 Students and state workers dispersed peacefully in cities across Chile late on Wednesday, following mass protests against inequality, even as President Sebastian Pinera pledged social reforms to try to quell days of rioting.

Thousands of striking workers, including healthcare professionals and teachers, banged pots and carried banners late into the evening in the capital Santiago. The largely peaceful marches were monitored by police and soldiers.

The day's marches and demonstrations dovetailed four days of protests, arson attacks and looting in which more than 6,000 people have been detained and at least 18 killed.

Trade unions and social groups wanted a voice in the rollout of a social reform plan announced by Pinera on Tuesday, said José Pérez Debelli, president of the National Grouping of Fiscal Employees (ANEF), one of the unions that called the strike.

"We must carry the voice of those who are on the street, to channel anger and discontent over the inequality of our country," he said.

The Copper Workers Federation (FTC), which includes unionized workers from each division of state miner Codelco, the world's top producer of the metal, joined the strike, prompting it to shut down its Andina mine and drastically scale back operations at its Ventanas smelter.

The federation called an end to the strike late in the day, after agreeing to further talks with government officials aimed at improving work conditions.

Top copper miner Antofagasta Plc said on Wednesday protests in Chile could cut its production by about 5,000 tonnes, roughly less than 3% of third-quarter output, because of delays in supplies and travel disruptions for workers.

It was only "a matter of time" before knock-on effects in the supply chain had a negative impact on the mining industry, said Jimena Blanco, head of Latin America research at consultancy Verisk Maplecroft.

"For example, yesterday’s strike by the port workers’ union affected 20 of the country’s maritime facilities, including key mining export ones in Antofagasta and Iquique," she said.

In his announcement, Pinera, a billionaire businessman, said he hoped to turn the violent protests into an "opportunity" for Chile.

His proposed reforms include a guaranteed minimum wage, a hike in state pensions and stabilization of electricity costs.

For many protesters, these were a step in the right direction. Others demanded more.

Textile worker Norma Carrasco, 68, joined the marches with her husband, 10 years her elder, carrying a home-made sign that read: "In Chile, pensions bring only hunger."

Between them, their pension amounts to $300, Carrasco said. "And I worked since I was a girl."

The president said his social reform package represented "concrete and urgent steps" to resolve inequality that has sent tens of thousands into the streets to demand economic overhaul and, in some cases, his removal.

Venezuela's socialist president, Nicolas Maduro, on Wednesday celebrated developments in Chile as representing victory in a battle "to dismantle the neoliberal model."

"I hope that by ending the violent demonstrations, through dialogue, efforts are made to find solutions," Francis said at a general audience in St. Peter's Square on Tuesday.

There were angry scenes in the Chilean Chamber of deputies on Tuesday after a group of far-left lawmakers sought to challenge Interior Minister Andres Chadwick over the numbers of people detained, injured and killed since the protests began.

Photographs and videos circulating on social media purport to show excessive force used by police and soldiers. Reuters has been unable to confirm their authenticity, however.

Chile's Human Rights Institute (INDH) said it received a complaint of torture in a central Santiago metro station and urged the authorities to investigate. The group said it had also registered 173 civilians injured by firearms since the weekend.

Prosecutors said on Wednesday afternoon that 6,493 people had been charged for involvement in protests and rioting since Saturday.

Justice Minister Hernan Larrain said the deaths and injuries was a source of "deep pain" for the government.

"Our commitment to democracy is inalienable and inseparable from the respect and protection of human rights and the operation of the Rule of Law," Chilean daily La Tercera quoted him as saying.