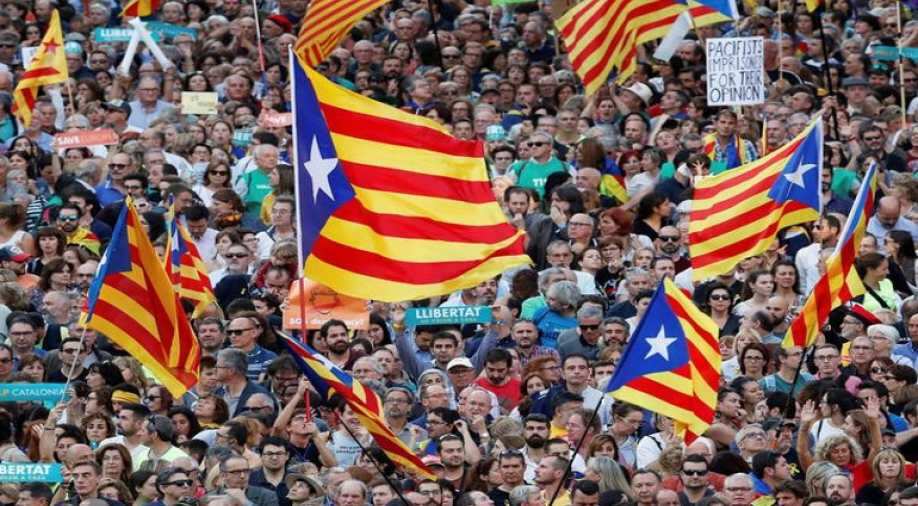 Catalans on both sides of the divide saw the day as a potential moment of truth for their region Photograph:( AFP )

Catalans voted Thursday in a crucial election that could mark a turning point for their region, just two months after a failed secession bid triggered Spain's worst political crisis in decades.

Record turnout is expected in a vote pitting leaders of the wealthy northeastern region's separatist movement against parties that want to remain in Spain.

Will voters again hand victory to pro-independence parties that tried to break Catalonia from Spain, one of whose candidates is in jail and the other in self-imposed exile in Belgium?

Or will they lose the absolute parliamentary majority of 72 seats they won in 2015?

Catalans on both sides of the divide saw the day as a potential moment of truth for their region, following weeks of upheaval and protests unseen since democracy was reinstated following the death in 1975 of dictator Franco.

While the independence question is far from new, it was the referendum on October 1 -- and a heavy police crackdown on voters -- that focused the world's attention on the region.

Some 5.5 million people are registered to vote in Thursday's election which is likely to see seven parties winning mandates in the 135-seat regional parliament.

Even before polling stations opened in Barcelona, people had formed long queues to cast their ballots.

In the seaside town of Calafell, Joan Rafael Nunez Margalet, a 56-year-old fisherman, was among the first to vote.

"We had to vote today, we couldn't have stayed home," he said, adding that he was voting for the pro-unity camp.

What next for separatists?

The vote is widely seen as a plebiscite on the independence question in Catalonia, whose autonomy Spain stripped in an unprecedented move after a failed independence declaration on October 27.

Crucially, however, even if the pro-independence camp wins, it is not expected to attempt another breakaway from Spain but rather try to enter into negotiations with Madrid.

In the staunchly pro-independence town of Vic, the sun shone feebly on a small line of voters waiting in the freezing cold outside a day centre for the elderly, their polling station.

One man wore a yellow ribbon -- a symbol used by separatists demanding their leaders be freed from detention.

Posters advocating independence were plastered all over the nearby walls, one of which had a picture of someone's hands tied behind their back, which read: "Help Catalonia".

Following the controversial October referendum, which went ahead despite a ban by Madrid, the crisis came to a head later that month when the regional parliament declared unilateral independence.

The move infuriated the Spanish government but also rattled a Europe still reeling from Britain's decision to leave.

The secession bid was short-lived, though, as Madrid sacked Catalonia's government, dissolved its parliament and called snap elections.

Axed Catalan president Carles Puigdemont fled to Belgium, avoiding detention on charges of rebellion, sedition and misuse of public funds for his role in the independence drive.

He has since campaigned virtually, holding rallies via video link.

"Today we will show, once again, the strength of an indomitable people," Puigdemont tweeted Thursday.

His deputy Oriol Junqueras remained in Spain and was jailed along with others pending an investigation into the same charges.

Opinion polls suggest Junqueras's leftist ERC party could win, and independence supporters, in general, are rallying to the cause.

"I hope we continue with the (independence) process," 40-year-old Anna Papiol said in Calafell as she voted for the separatists.

"I want Europe to realise what the people want," she said, after separatist leaders failed to secure the support from the EU that they had sought.

Over on the other side, the centrist, anti-independence Ciudadanos party is close to ERC according to polls and some suggest it could win under Ines Arrimadas, a charismatic 36-year-old.

"We have a date with history, these elections will be remembered," she told a cheering crowd in Barcelona to close the campaign Tuesday.

At stake is the economy of a region that has seen its tourism sector suffer and more than 3,000 companies moved their legal headquarters since the referendum.

But whatever the result, voters and analysts predict no single party will win a decisive majority, which will force negotiations to form a government.

Both camps consist of three parties that may struggle to join forces -- Puigdemont's Together for Catalonia list, ERC and the far-left CUP party for independence, and Ciudadanos, the Socialists and Prime Minister Mariano Rajoy's Popular Party against it.

In between is the leftist Catalunya en Comu-Podem grouping, which is against independence but supports holding a legal referendum and could play the role of kingmaker.

In an election expected to be very close, Spanish daily El Pais said the final result may be in the hands of "a million undecided voters".

According to Catalan daily La Vanguardia, "independence (parties) only need to win 45 percent of the votes in order to preserve their majority".