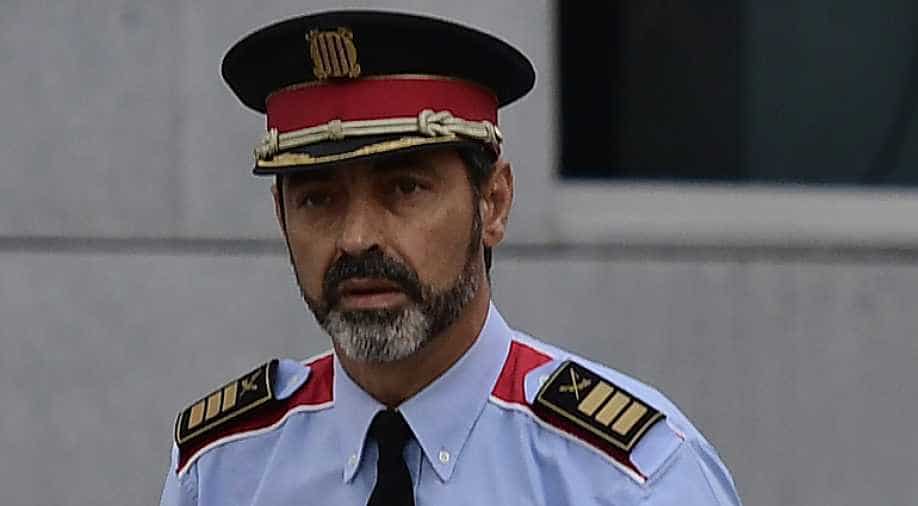 Trapero's force was accused of failing to rein in pro-independence protesters during the recent unrest in Catalonia. Photograph:( AFP )

Catalonia's police chief appeared in court in Madrid on Friday to answer accusations of sedition over his handling of unrest last month sparked by the region's contested independence drive.

An investigating judge summoned Josep Lluis Trapero along with three other suspects, a move that escalated tensions between the regional and national governments.

Catalan leaders have threatened to declare independence in defiance of the national government and courts, after pushing ahead with a banned referendum on the issue last Sunday.

The independence dispute has laid bare a rift between Catalonia's regional police and national security forces deployed to the region.

Trapero's force was accused of failing to rein in pro-independence protesters during recent unrest in the northeastern region.

The accusations refer to unrest in Barcelona on September 20 and 21 after national security forces raided regional government offices in a crackdown against the independence drive.

Trapero arrived at Madrid's National Court on Friday flanked by two fellow officers and made no comment to waiting reporters, an AFP reporter saw.

They were greeted outside the court by a cheering crowd of politicians from allied parties.

A small group of about eight anti-independence protesters also demonstrated outside the court yelling "Catalonia is Spain," before police made them leave.

A fourth defendant, senior Catalan police official Teresa Laplana, was due to appear before the judge by video link for health reasons, court officials said.

Tensions between Catalonia and the national government have plunged Spain into its worst political crisis in decades.

Announcing the summons on Wednesday, the court said the four suspects were accused of "a crime of sedition... in relation to the gatherings and demonstrations carried out to forcibly prevent the authorities and their officers from performing their duties."

The crime of sedition is punishable by up to 15 years in prison if committed by a member of the authorities, under Spain's penal code.

In the September demonstrations called by Omnium and ANC, protesters damaged Civil Guard police vehicles and stopped officers from leaving the building they were searching.

Police prevented the defendants' supporters from entering the court building with them on Friday.

That vote was banned by Madrid and marred by violence by national police against voters.