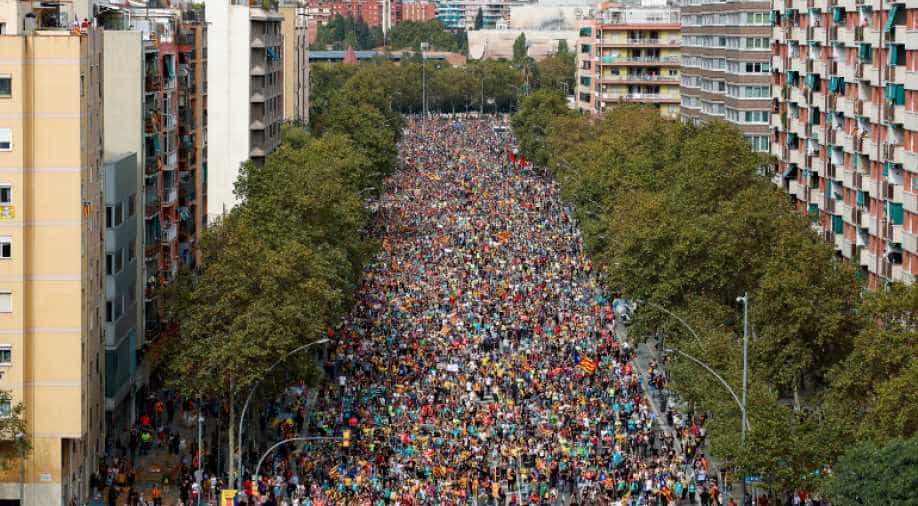 The visit came as Sanchez faces mounting criticism over his handling of the crisis, which erupted a week ago when the Supreme Court sentenced nine separatist leaders to long jail terms over an abortive 2017 independence bid.

Spain's Prime Minister Pedro Sanchez and the opposition leader visited Barcelona on Monday to meet police struggling with Catalan separatist violence in a crisis that could be a game-changer in next month's general election.

The visit came as Sanchez faces mounting criticism over his handling of the crisis, which erupted a week ago when the Supreme Court sentenced nine separatist leaders to long jail terms over an abortive 2017 independence bid.

Over the past week, nearly 600 have been people hurt, two of whom remain critical, as protesters have torched cars, burnt barricades and lobbed rocks at police who have hit back with tear gas and rubber bullets.

The nightly violence has dominated the news in Spain and made headlines around the world, but so far, Madrid has shown little appetite for direct intervention, despite repeated calls for regional president Quim Torra to condemn the unrest.

And it has done little to help the ruling Socialists, with a string of surveys on Monday showing rising support for the conservative opposition Popular Party.

If an election was to be held today, the Socialists would win 117 seats in the 350-member parliament, down from 123 in the April elections, while the PP, would take 103 up from 66 in April, according to a poll in eldiario.es

In an address at the police headquarters, Sanchez acknowledged the crisis was not yet over but warned the government would not back down.

"It is evident that the radicals who engage in violence have decided that Barcelona will be their theatre of operation to broadcast their grievance to those at home and abroad," he said before meeting wounded officers in hospital.

"While it's true that the crisis isn't over, we have to keep trying. They want to make it worse but we are much more persistent, much more determined."

PP head Pablo Casado used his visit to Barcelona to demand the government "intensify its operations" against the troublemakers, urging it to ensure the "immediate return of security... to the streets of Catalonia".

Sanchez has repeatedly come under fire from his opponents for taking a soft line on the separatists, with the resolutely anti-separatist Ciudadanos on Sunday demanding Madrid oust Torra and suspend Catalonia's autonomy, as it did in 2017.

So far, Sanchez has refused to speak to Torra despite his call for "unconditional" talks, an apparent attempt to secure agreement for a legal referendum on independence -- a non-starter for Madrid, which claims the Constitution does not allow it.

"The independence movement’s biggest problem politically is that they’ve lied to the Catalan people," she said.

"They told them the split was possible, that the right to self-determination exists in a democracy like Spain -- which is a total lie.

There’s no right to unilateral separation in this democracy nor any other."

Sanchez government denies the current unrest is political in nature, with Interior Minister Fernando Grande-Marlaska on Monday describing it as "basically a crisis of public order."

Although Barcelona returned to relative calm at the weekend, some 500 activists Monday rallied in the city centre demanding Sanchez "sit and talk" while the radical CDR called on protesters to gather in the evening outside the interior ministry armed with paint-filled balloons.