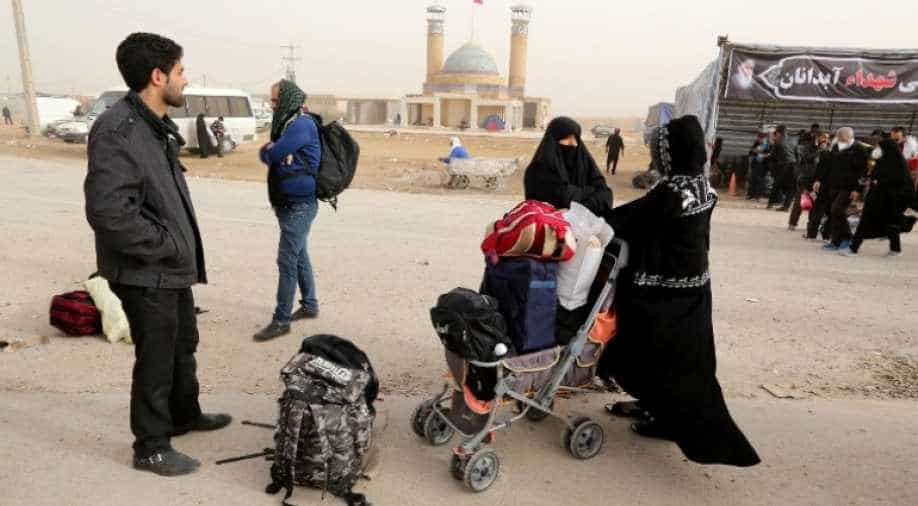 Iranian pilgrims wait at the Mehran border point between Iran and Iraq, as thousands of Shiite Muslim believers headed towards the central Iraqi shrine city of Karbala. Photograph:( AFP )

Iranian organisers say more than 1.8 million Iraqi visas have been issued for Iranians this year for the Arbaeen pilgrimage.

At the border town of Mehran between Iran and Iraq, a sea of pilgrims surges forwards, en route to one of the biggest religious pilgrimages on the planet.

Iranian organisers say more than 1.8 million Iraqi visas have been issued for Iranians this year for the Arbaeen pilgrimage which culminates on Tuesday as the devout head, many by foot, to Karbala and one of the holiest sites of Shiite Islam, the shrine of Imam Hussein.

Men and women, young and old, toddlers in prams and elderly pushed in wheelchairs -- they converge from all over the Islamic republic.

"I go because my heart demands it of me, I go because of my love for Imam Hussein," said Morteza Taghikhani, a 39-year-old auto worker, who had already been on the pilgrimage five times before.

His wife and young children were accompanying him for the first time: "They insisted on coming. Though it is a difficult trip, they've enjoyed it so much."

The pilgrims stream past tents, called "mokebs", which hand out free food ranging from scrambled eggs to boiled turnips. Full meals are served at midday and in the evenings.

The crossing stays open around the clock, but blankets and tents are provided for anyone needing a rest.

Every few metres there is a free shoeshine, and when the pilgrims take off their shoes the attendant kisses their feet as a sign of respect: for Shiites the Arbaeen march is so holy that just serving the pilgrims is thought to bring divine reward.

The pilgrimage marks the martyrdom in 680 of Imam Hussein, grandson of the Prophet Mohammad, who refused to accept the leadership of the "usurper" Caliph Yazid and was massacred along with his followers at Karbala.

Shiite Muslims have honoured his death with elaborate mourning ceremonies ever since and Hussein's last stand has come to serve as a powerful symbol of resolve and sacrifice in the face of oppression.

That imagery remains a key part of Iran's religious and political self-image, and even as modernity has transformed much of the country, the huge scale of the Arbaeen pilgrimage is a reminder of how significant the symbolism remains.

"This march shows world imperialism that the Muslim nation cannot be defeated, whether by economic or military or political means," said Sajjad Entezar, a 23-year-old cleric from the Iranian holy centre of Qom.

Arbaeen marks the 40th day after Imam Hussein's martyrdom, with the devout marching on foot for all or part of the way to Karbala.

Khadijeh Mehrjoo, a 36-year-old city council member from a small town in central Iran, said she was not concerned by the long days and nights -- or even Iraq's security issues.

"There is no need to worry, Imam Hussein himself looks after us," she said.

State institutions offer free services and food to pilgrims alongside those of the public, while the national broadcaster gives wall-to-wall coverage for a fortnight before Arbaeen, which falls on October 30 this year.

The march was forbidden for many years, under former Iraqi dictator Saddam Hussein, who fought a devastating war with Iran in the 1980s. Restrictions were only lifted after his downfall in 2003.

With the formation of a new Iraqi state, where the post of prime minister is held by a Shiite, the march quickly became one of the most popular religious pilgrimages in the world.

Even the Islamic State group's emergence and its ruthless campaign against Shiites, which it considers infidels, did not deter the pilgrims.

If anything, the Sunni extremists' seizure of vast swathes of Iraqi territory in 2014 -- reaching within 70 kilometres (45 miles) of Karbala -- only invigorated the faithful, pushing the number of pilgrims into the millions.

For Mehrjoo the pilgrimage is itself a means to defeat the threats against it.

"If we join hands we can overcome. We can defeat the enemies of Islam."

China to charge 12 Hong Kong locals who were caught fleeing