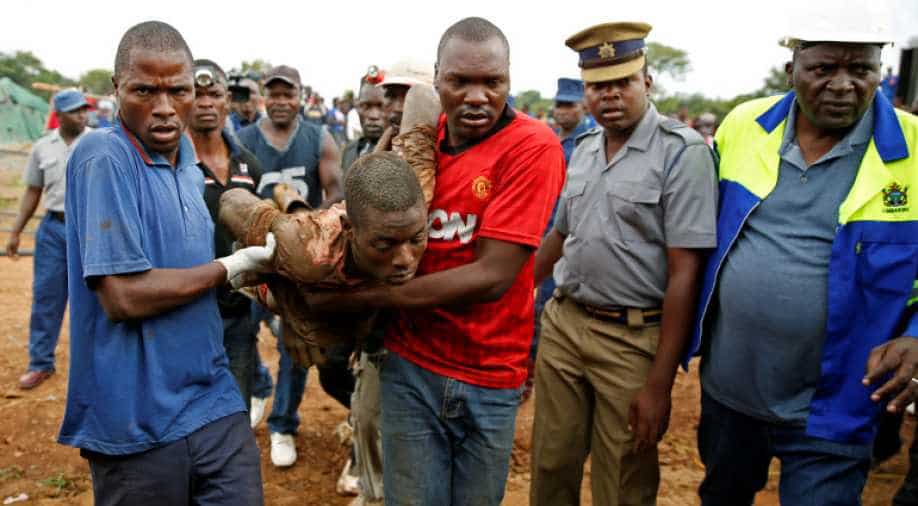 A rescued artisinal miner is carried from a pit as retrieval efforts proceed for trapped illegal gold miners in Kadoma, Zimbabwe. Photograph:( Reuters )

'Eight of the trapped minors have been rescued ... while 24 bodies have been retrieved to date as rescue efforts continue at Battlefields Mine,' the Zimbabwe Broadcasting Corporation reported.

"Eight of the trapped minors have been rescued ... while 24 bodies have been retrieved to date as rescue efforts continue at Battlefields Mine," the Zimbabwe Broadcasting Corporation reported.

The two disused mines are situated near the town of Kadoma, 145 kilometres (90 miles) southwest of the capital Harare.

The rescued received medical attention on site before being taken to the hospital, but were in a stable condition, the report added.

Television footage showed some of the men, in soaked, muddy clothes, being helped to a makeshift clinic.

In a clip posted on Twitter, one survivor told journalists that the waters had risen to neck level, forcing them to stand for days until it receded.

On Friday the government said that between 60 and 70 "artisanal" miners were trapped in two shafts.

It launched an appeal for $200,000 to be used "to pump out water, feeding the bereaved families and the (rescue) teams on the ground, transportation and burial of the victims", local minister July Moyo said in a statement.

"Given the magnitude of this disaster, we kindly appeal to individuals, development partners and the corporate world for assistance in cash and kind," he said.

Zimbabwe is in the throes of a deep economic crisis, the worst in a decade.

Annual inflation shot to 56.90 per cent up from 42.09 per cent in December 2018, according to official statistics released Friday, the highest increase in a decade. Economists say in reality prices have gone up more than three-fold in recent months.

Formal unemployment is estimated at over 90 per cent and artisanal gold mining, mostly in mines long abandoned by big corporates, is widespread providing a source of income for many.

Artisanal mining is not banned outright in Zimbabwe and is largely unregulated.