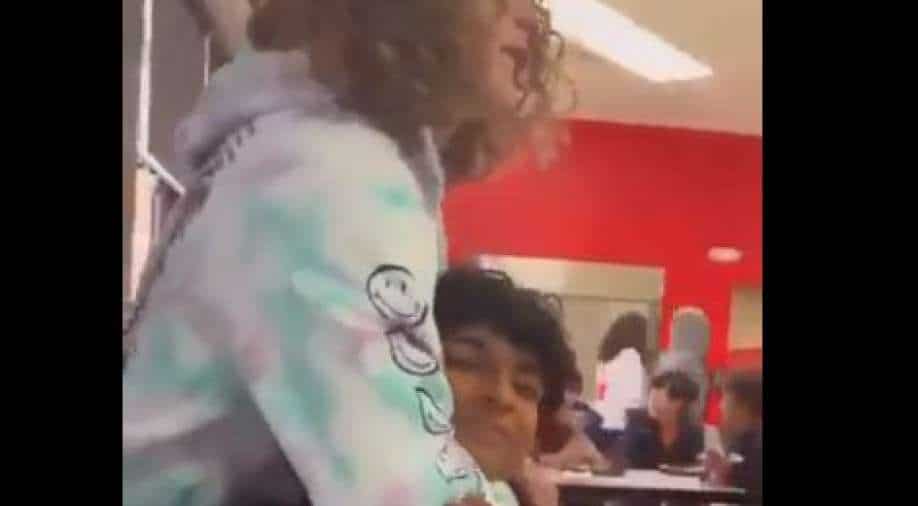 Video of an Indian-American boy being bullied in school as gone viral Photograph:( Twitter )

Police said it was investigating the incident as reports claimed  Pritmani faced three days of suspension while the boy who attacked him received just one day's punishment.

A video of an India-American boy being bullied at school in Texas has gone viral on the net.

The boy Shaan Pritmani reportedly choked for over four minutes. The incident took place in Coppell Middle School in Dallas.

Unfortunate to see that Shaan Pritmani of Indian origin was harassed & bullied on camera at Coppell School, Dallas.

Instead of the accused getting punished, Shaan got suspended for 3 days.

In the video, Pritamani is shown sitting at the lunch table as a student grabs his neck and then drags him off his seat as Pritamani falls on the floor.

On Wednesday, May 11th, during lunch, Shaan Pritmani was physically attacked and choked by another student at his middle school.

Police said it was investigating the incident as reports claimed  Pritmani faced three days of suspension while the boy who attacked him received just one day's punishment.

@Coppellisd what action is being taken against this bully who is choking his fellow student during school lunch ? This is horrible 💔 #CoppellISD #CoppellMiddleSchool

Why Shaan Pritmani was suspended for 3 days while the bully was only given one day suspension? This is unfair https://t.co/VSmFnVsYIZ

Shaan Pritmani gets choked out by a bully and passes out.

School officials didn’t write a formal complaint bc there’s been “too many complaints of bullying”.

Shaan’s mother Sonika Kukreja said she it was "heartbreaking" while informing that authorities said it was an "altercation".