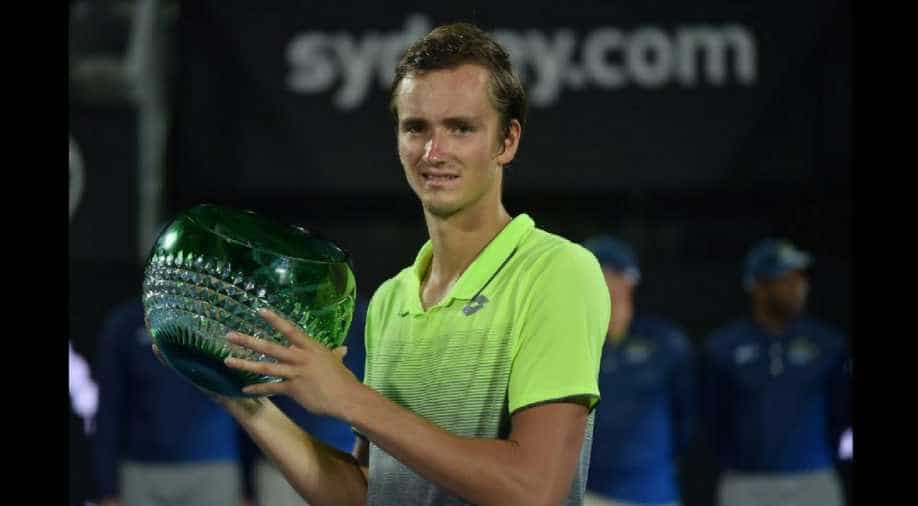 Daniil Medvedev of Russia holds up the trophy after beating Alex De Minaur of Australia in the men's singles final at the Sydney International tennis tournament. Photograph:( AFP )

Medvedev completed an all-conquering week to hit back from losing the opening set to extinguish de Minaur, 1-6, 6-4, 7-5.

It was 21-year-old Medvedev's seventh win this week, giving him solid preparation for next week's Australian Open in Melbourne where he faces another Australian Thanasi Kokkinakis in the first round.

"I'm the kind of person, the more emotions I feel, the less I show them, actually, especially if they are good ones," Medvedev said.

"After the match, I didn't fall down or anything, but I'm really happy. I mean, to make it through the quallies, there were so many circumstances."

Looking ahead to the Australian Open he added: "I need to be humble with this because to win this tournament is good, but I want to win some rounds in Australia.

"And it's going to be very tough to get back again on the court, especially against Thanasi, I'm sure the crowd will be crazy in Melbourne for him.

"It's a five-set match, so I just need to do my best at recovery to be good on Tuesday."

Medvedev struggled in the opening set as the 167th-ranked de Minaur grew in confidence and was willed on by a supportive home crowd.

The longer the rallies the more dangerous de Minaur became and he claimed the opening set after winning six games on the trot.

But Medvedev found his way back in the second set, breaking serve in the seventh game to take a 4-3 lead and went on to level the match at a set apiece.

Winners flowed from the Russian's racquet with a running backhand crosscourt passing shot he played for a 3-0 lead an outstanding moment.

Down 4-1, the young Aussie appeared well out of the contest, but two double-faults handed de Minaur a break point and Medvedev surrendered serve when he sprayed a forehand long.

Fired up young de Minaur worked away at Medvedev's lead amid the din inside Ken Rosewall Arena.

Medvedev held a match point in the ninth game, but when serving for the title at 5-4, de Minaur broke serve to send the crowd roaring.

But with the match beyond two hours, the 18-year-old Aussie began to show signs of fatigue and it was his errors that handed Medvedev another chance to serve out for the title at 6-5.

The 84th-ranked Medvedev also came back from a set down to upset Italian fourth seed Fabio Fognini 2-6, 6-4, 6-1 in the semi-finals of the tournament.

It has been a sensational fortnight for 18-year-old de Minaur. He beat Frenchman Benoit Paire to reach the Sydney final after upsetting Milos Raonic to advance to the Brisbane International semi-finals last week before losing to American Ryan Harrison.

"It's been a roller coaster, and I honestly wouldn't have it any other way," de Minaur said.

"I have enjoyed every second of it. It's been a thrill, and I just want it to keep on going.

"I'm tremendously proud. I put in all the hard yards, and it's great to see the results coming through."