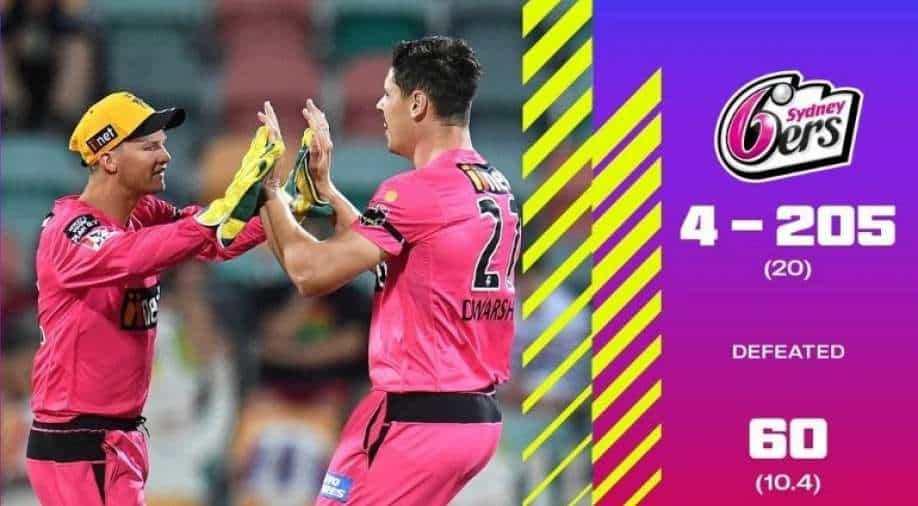 Apart from Philippe, Jordan Silk scored unbeaten 45 runs off just 19 deliveries as Sydney Sixers racked up a total of 205 runs after being asked to bat first.

Sydney Sixers put up an enthralling performance with both bat and ball against Melbourne Renegades to pull off the "biggest victory" in the Big Bash League (BBL) history. The team secured a 145-run win over their opponents here on Sunday.

Josh Philippe led the charge with the bat, breaking his own record for the highest BBL score by a Sixers player during a scintillating knock of 95 off 57 balls, which included nine fours and three sixes.

Apart from Philippe, Jordan Silk scored unbeaten 45 runs off just 19 deliveries as Sydney Sixers racked up a total of 205 runs after being asked to bat first.

After setting a mammoth target for Melbourne Renegades, Sydney Sixers dominated their opponents with the ball as well, ending their innings in just the 11th over when they had just 60 runs on the board.

Ben Dwarshuis was the chief destroyer with the ball, finishing with career-best figures of 4/13 off 2.4 overs. Steve O`Keefe chimed in with 3/16 from 3 overs, while Carlos Brathwaite picked up 2/12.

"The biggest victory in the history of the BBL. Massive effort from the @SixersBBL #BBL10," BBL wrote on Twitter. "The BIGGEST winning margin in @BBL history!" Sydney Sixers tweeted. The Sixers now have a six-day break before returning to action when they face the Adelaide Strikers at Blundstone Arena next Sunday.