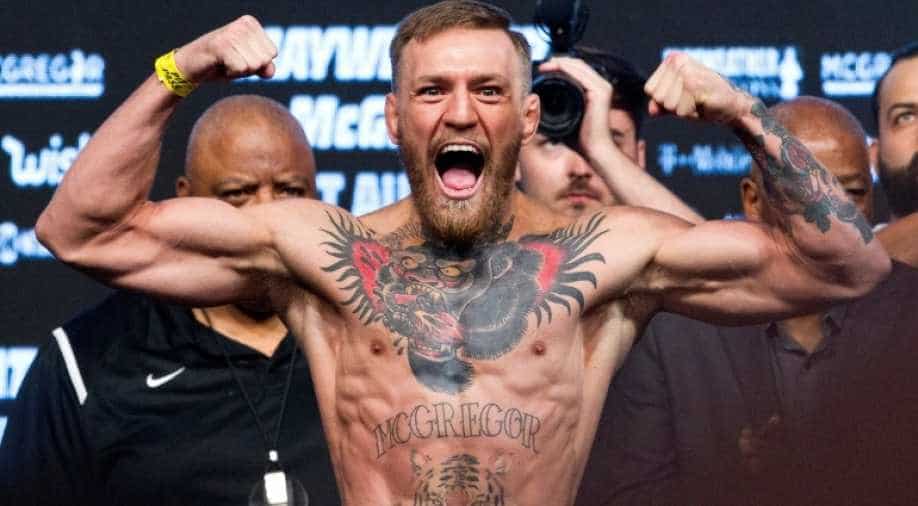 File photo of UFC lightweight champion Conor McGregor of Ireland posing on the scale during his official weigh-in at T-Mobile Arena in Las Vegas, Nevada in 2017. Photograph:( Reuters )

The Dublin-born 30-year-old has never been far from controversy throughout his turbulent career.

Irish mixed martial arts (MMA) fighter Conor McGregor said on Tuesday he was retiring from the sport, five months after losing to Khabib Nurmagomedov in a controversial title fight in Las Vegas that sparked a brawl and led to a six-month ban.

The 30-year-old, who has a record of 21 wins and four defeats, is still suspended by the Nevada State Athletic Commission for his part in the melee that broke out after his bout with the Russian last October.

This marks the second time McGregor has announced on Twitter that he has "retired". A month after losing to Nate Diaz in March 2016 he said he had decided to "retire young", but returned to defeat the same opponent later that same year.

"I wish all my old colleagues well going forward in competition. I now join my former partners on this venture, already in retirement."

The Dublin-born 30-year-old has never been far from controversy throughout his turbulent career.

The brash Irishman was charged in April 2018 with three counts of assault and one count of criminal mischief after police said he attacked a charter bus in New York carrying UFC fighters.

Video footage appeared to show McGregor and his entourage in an underground parking area smashing windows on a bus filled with Ultimate Fighting Championship fighters who were at the arena to publicize an upcoming UFC event.

He pleaded guilty to disorderly conduct, a violation which would not result in a criminal record.

In a separate incident earlier this month, McGregor was arrested in Florida after smashing a fan's phone.

Inside the octagon, there have been few better.

McGregor won the UFC's featherweight title in 2015 by knocking out Brazilian Jose Aldo in 13 seconds before having two fights against Diaz at welterweight the following year.

He became the first fighter to hold two UFC belts simultaneously when he defeated Eddie Alvarez for the lightweight title in November 2016 but was later stripped of the strap after a period of inactivity.

McGregor was outclassed by five-division champion Floyd Mayweather in a much-hyped boxing bout in August 2017 and he returned to the octagon for the now infamous fight with Nurmagomedov last October.

His announcement comes in the wake of reports that UFC boss Dana White had denied McGregor the main event slot at the upcoming event in Las Vegas scheduled for July 7.

"He has been so fun to watch," White said in the tweet. "He has accomplished incredible things in this sport. I am so happy for him and look forward to seeing him be as successful outside of the octagon as he was in it."