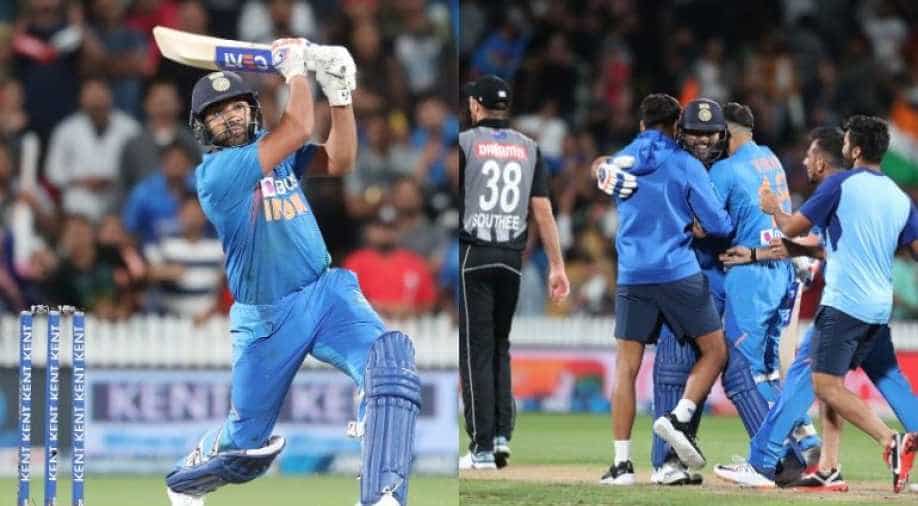 The Indian opener had earlier scored 65 in 40 balls studded with six boundaries and three sixes to help India reach 179 for 5.

The Indian opener had earlier scored 65 in 40 balls studded with six boundaries and three sixes to help India reach 179 for 5.

Virat Kohli made a brisk 38 in 31 balls with two boundaries and a six to put a competitive total on the board for the visitors.

Williamson had earlier scored a valiant 95 but it wasn't enough for New Zeland to clinch the match.

The hosts looked in control till the end but Shami's last over turned the game around for India after he dismissed Taylor and Williamson after being hit for a six off the first ball.

New Zealand needed nine runs off the last over from Shami but the Black Caps managed to score just 8 runs.

Aisa lagta hai apunich Bhagwan hai !
So fit for #RohitSharma the way he has made impossible tasks possible.
But defending 2 runs of 4 balls was an unbelievable effort from Shami.
Yaadgaar hai yeh jeet #NZvIND pic.twitter.com/7HD4qXN4Me

I bet You Can't Scroll Down Without Liking & Retweeting This Pic ❤#RohitSharma #Hitman #INDvNZ pic.twitter.com/5Jh05Fdrk5

If #RohitSharma is playing like this, For sure this #IPL trophy is for Mumbai Indians 😛 #GoEvenThisSeason pic.twitter.com/rlz1Wtzeoh